It's no secret that I love deadlifts. I try to write about other things that inspire me – squatting, pull-ups, seeing Nadine Velazquez naked in the first 5 minutes of Flight – yet I'm constantly drawn back to the mighty pull like a jacked-up sockeye salmon returning to its pristine natal waters to spawn.

Fortunately for me, if the amount of email I receive asking about improving deadlifting performance is any indication, the majority of T Nation readers feel the same way.

So what follows are a few lesser-known tricks and tweaks that you can use to quickly improve your deadlift technique and bust through plateaus.

These tricks won't turn you into Andy Bolton over night, but they could, to steal a line from Dave Tate, take you from "Shit to Suck" – which is still pretty good.

And, if you play your cards right, maybe even from Suck to Good!

I've worked with a wide array of trainees – from high school and elite athletes to 88 year-old grandmothers – and I've yet to meet anyone whom I couldn't teach a hip hinge pattern to, and subsequently get them to deadlift appreciable weight.

It just comes down to which variation appears "acceptable" and safe once I put them through a proper assessment, taking into consideration their training and injury history, skill level, and postural considerations.

I've stated on numerous occasions that one of the greatest benefits of the deadlift (other than making you stronger than an ox, slapping slabs on meat onto your frame, injury prevention, and improved athletic performance) is its convenience factor. Meaning, what makes it so unique is that it can be easily tweaked to the needs of the lifter, and not vice versa.

While not even close to an exhaustive list, below are the inherent benefits/advantages of the most widely recognized deadlift variations.

Note: since most people generally have the movement quality of C3PO on a good day, at Cressey Performance, 95% of the time we start people with a trap (hex) bar deadlift and progress from there.

Lack of the aforementioned mobility will inevitably lead to lumbar flexion, which is a major no-no when using significant loads.

So for example, I wouldn't have someone with limited training experience, let alone poor ankle dorsiflexion and an overly kyphotic posture, perform conventional deadlifts.

Instead, I'd hammer home hip hinge patterning and then parlay that into something a little more "user friendly" like the trap (hex) bar deadlift.

Then, as he or she gets more proficient, I'd progress the client and introduce more advanced variations, whether it's flipping the bar over and performing low setting trap bar deadlifts or graduating to straight bar variations.

This brings me to the setup.

Being one of the more technical strength movements, it's no wonder that it often takes trainees months or years to really perfect deadlift technique.

Let's focus on the initial setup, as it's something that doesn't get a lot of love yet can (and often will) make or break your deadlifting success.

Say, for example, that for some reason it was your lifelong dream to come to Cressey Performance to watch me deadlift in the flesh. Personally I'd choose something cool like a cameo appearance in the next GoDaddy commercial with Bar Refaeli, but that's just me.

Anyway, one of the first things you'd notice is that my warm-up sets look exactly the same as my work sets.

One major SNAFU people make during their initial pull, particularly when breaking inertia to get the bar moving, is that their hips come up too early, like this:

For many that mistake is caused by one of two things:

1. You're trying to be too explosive/fast.

Explosiveness is important, but it's advantageous for beginners and even some intermediate lifters to slow things down a bit and to try to "synchronize" everything.

While more common with the high-school athletes I train, I still see a fair number of people (college and professional athletes, as well as general population) try to yank the weight up as quickly as possible at the expense of technique and possibly even their biceps tendon.

This serves as an appropriate transition to the second thing:

2. You're not just casually bending over to pick up the bar.

The typical thought process for many lifters as they approach a deadlift is, "Okay, I'm going to bend over and lift this son-of-a-bitch off the ground, and then go give everyone a high-five and maybe kiss some babies."

While this isn't necessarily a bad dialogue to have, what should be going through one's head is some self talk I stole from Eric Cressey: "Okay, I need to apply more force into the ground and think about 'pressing' or 'pushing' myself away from the floor."

So rather than just lift the bar off the ground, think about generating more force by digging the heels in and driving the hips forward.

Throwing myself into the mix, I make sure that I place a lot of tension in my hamstrings and that when I actually do go to pull the bar and put things into motion, my hips and shoulders move simultaneously. For lack of a better term, I "use my ass."

By keeping my hips from rising too early, I'm able to take more strain off my lower back and allow my glutes and hamstrings to do their part.

It's not a game changer and certainly won't be the magic fix for everyone, but these cues are a way to make people more stable and less prone to energy leaks during their pulls.

Admittedly this is something that I've ignored until recently, and it wasn't until diving into the phenomenal book, Easy Strength, by Dan John and Pavel (as well as taking the advice of T Nation coaches Bret Contreras and Todd Bumgardner) that I began to see the error of my ways.

Unfortunately, this is something that fails to resonate with some trainees, and is the reason I wrote this article on why and how to incorporate more lifts above 90% into your repertoire.

While there's a bit of a learning curve involved, many can gain significant strength with as little as 40% of 1RM.

Strength, especially in the initial stages, is more about neural adaptation, engraining proper motor patterns, and CNS efficiency than it is about increasing muscle mass.

That said, when you start to discuss the intermediate lifter (which describes the majority of T Nation readers), as well as a fair number of advanced lifters, achieving a respectable deadlift isn't necessarily about grinding out singles of 90% 1RM or more.

Many strength coaches are adamantly opposed to anything thatisn't either "speed" work (40-60%) or Max Effort work (90%+), saying that the middle is a complete waste of time. But it's also important to perfect technique, solidify one's exercise proficiency (and the ability to repeat it), and see how that parlays into bigger pulling numbers.

"Speed" work, as most people understand it, is assuredly about increasing the rate of force development, but equally as important (if not more so) is solidifying good technique.

In the past, whenever I'd make a run for 600 pounds (my best pull to date is 570 pounds), I'd inevitably approach the 550-ish mark and attempt to get my 90% lifts in, week in and week out – and eventually my spine would crap out like a failed game of Jenga, my CNS would get fried, and I'd have to take a hiatus from pulling heavy.

Once you start approaching 2.75-3x bodyweight pulls, the body can only take so much load on a repeated basis – which is why lately I've been focusing more on getting fast, quality reps at a lower percentage, and I feel amazing.

I'm still doing my speed work on occasion, but instead of hitting multiple lifts at 90% or above, I've been taking it down a notch and performing repeated lifts at 70% (with limited rest) and then hitting a "sorta" max every other week.

For example, during a recent deload week, instead of trying to be a hero and grind out heavy singles, I performed the following deadlift session:

I followed that with some high-rep glute-ham raises, goblet squats, a few Prowler pushes, and called it a day.

As such, I went into my next "phase" feeling much more refreshed and ready to deadlift a Mack truck.

You're always going to have ebbs and flows in your training and I respect those who bust their ass in the weight room, but for those struggling to take their deadlift to the next level, this approach will work wonders.

If I program deadlifts for 5 sets of 5 reps, I tell people that rather than approaching it as a set of five repetitions, think of it as five separate singles. Each rep is its own set.

One major mistake people make is rushing through their set and trying to get everything over with as quickly as possible. This is when things get sloppy. Whenever I see an athlete rushing through his or her set, I often ask, "Are we doing dead lifts here, or bounce lifts?"

After a brief, quizzical look, a light bulb usually goes off.

I coach people to reset after each rep – meaning after they pull the bar off the ground, lock it out, and then descend back to the floor, I tell them to rest for a second or two to re-adjust their spinal position and get their air (brace the abdominals) before performing the next rep.

Remember, it's not a race.

This significantly cleans things up and gives people checks and balances to ensure that every repetition is performed with bullet precision technique.

I would love to say that this is the last deadlifting article you'll ever need, but alas, this bad boy merely scratches the surface of an expansive topic.

There are many tricks you can employ to take your pull from the odious Shit zone to something decidedly less offensive, so give these tips a shot and see where you end up.

Who knows? Your time in Shit and Suck may just be brief pit stops on your journey to Good and beyond! 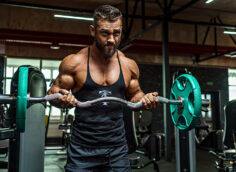 To gain serious size, stop standing in your own way. Take this bodybuilding test to see if you're on the right path.
Bodybuilding
Stuart McRobert October 10

Do these exercises before you bench, squat, or deadlift and you'll lift more weight than ever before. Guaranteed.
Bench Press, Deadlift, Powerlifting & Strength, Squat, Training
Dr John Rusin March 29

Don't do more sets and reps than you need to. All it does is eat into your recovery and slow down gains. Details here.
Bodybuilding, Tips, Training
Tom MacCormick March 5