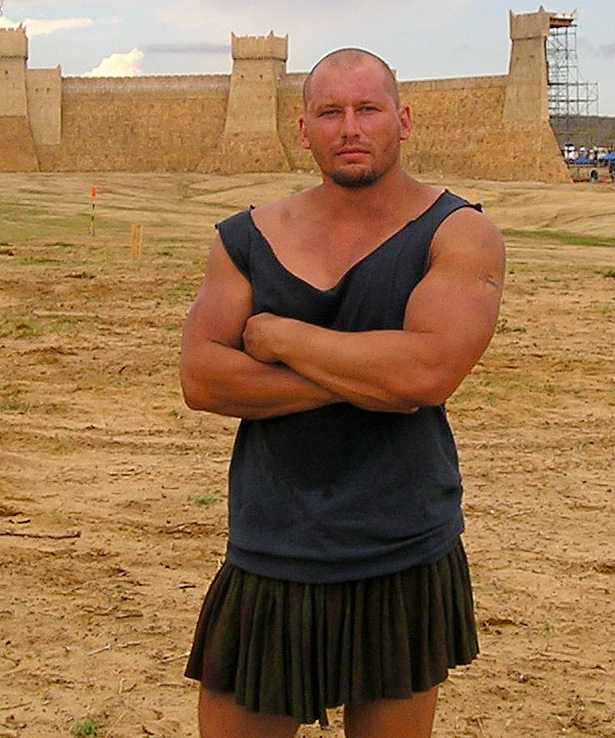 I'd been in the hospital for a few days. Special effects accident. We'd been shooting the epic night sequence on the beach and there was an explosion that engulfed me. I ran out of the ball of flames and put myself out on the sand by rolling, or rather, writhing, around in it. My right arm, shoulder, and back were badly burned and I was on a morphine drip. I was only mildly coherent when the phone next to my bed began ringing.

"Nick! It's Wade. Simon wants to shoot that horse fall you rehearsed a few months ago. You're good, right?"
"Uh, yeah, I should be okay. I'm a bit drugged up right now and my arm..."
"Great! You're on second unit. 7 AM call-time on set."

Click. The phone went dead. The next day I had the nurses cover my arm in gauze and bandages. I then had the make-up crew touch it up with flesh colored make-up so that it wasn't noticeable for the remaining scenes. I met with Simon, the Second Unit Director, who's responsible for directing all the action.

He looked at me quizzically.

"I've managed to pick up a stomach infection and I've got the shits really bad."
"Alright," he said, grimacing. "Get on the horse. Let's get this done."

I ended up doing the fall three times. Each one was more painful than the last. Each time, after I hit the deck, 20 horses would gallop past me. They could've run over me for all I cared. I was weak, in pain, and desperately hoping I didn't soil myself in front of 100 cast and crew members. Simon thanked me and I went straight back to hospital. Thankfully, the gag (stunt) made it into the movie. Brad Pitt throws a spear at Hector's general (the guy I was doubling) and I - I mean he - gets thrown off the horse and killed.

Every stuntman has these stories, but Troy was a game changer for me. Not just because of how I had to adapt my training to the constraints of a hectic schedule, but also because I had to do my job whilst badly injured, in extreme heat, and still give a top action performance.

Blockbuster movies are relentless. You end up working a minimum of 12 hours a day, often 7 days a week. Very few jobs give you enough time to train once filming begins. Therefore, training has to be incredibly time-efficient. It also has to ensure that you get the most out of each workout. There are times I've literally done 30-minute training sessions three times a week and still made progress because I had clear goals, solid progressions, and total focus during those short, intense sessions.

The job itself is highly physical, but unlike an athlete or an actor, we're often asked to perform at a high-caliber on the spot with no warm up. You have to spring into action time and time again from a dead stop. It's virtually guaranteed you'll be performing these while nursing an injury, whether it's a bad knee, bad back, twisted ankle, whiplash, or burn. Sounds fun, doesn't it?

Stunt work requires extreme physicality and short bursts of energy. The excruciatingly long days take their toll but they're something you eventually adapt to. Doing the actual stunts is more about preparation than anything else. When you do a stunt it's over quickly and then repeated a number of times until every department is in sync (camera, sound, lighting, etc.), so you'll have to get up for a stunt time and time again even though you're exhausted and injured.

Frankly, everybody trains a bit differently because of the vast skill set that's involved in stunt work. We have champions in every sport from free-running and gymnastics to fighting sports like boxing and MMA. We have professional rally drivers and motocross riders, scuba divers, high diving champions, horseback riders, and rock climbers. You name it, someone in stunts does it!

My skills came from all-round weightlifting, rock climbing, track and field, and swimming. By the time I was qualified, I had national level qualifications and successful competition experience in fighting (boxing and ju jitsu), gymnastics, trampoline, scuba, swimming, and industrial rigging. The rest of what I know I learned on the job. Car work in particular is highly specialized and it takes a lot of trust to let someone roll a car over for a crash sequence. 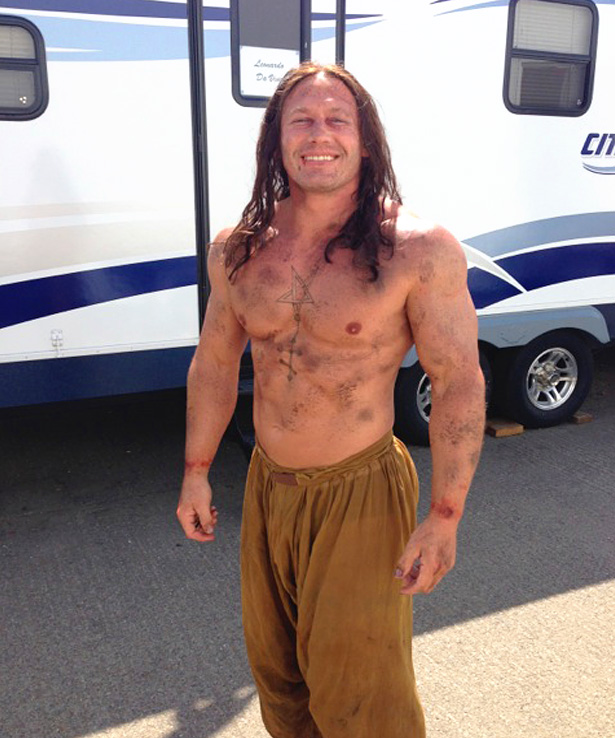 During the 2010 movie, Clash of the Titans, the actors and the stuntmen had the following equipment available to us in our rehearsal area:

That was all I needed to set up an effective training routine and schedule that was based on building strength, a steel core, and agility.

I used a modified version of 5/3/1 and added a back-off set and a 50% set (a set where you attempt to do half the reps you did on the previous set).

I prefer anyone who isn't a powerlifter to choose either the squat or the deadlift. Most stuntmen seem to prefer the deadlift. Me? I prefer the squat. As a stuntman the lower back takes a pounding. The last thing I need is a sore back before I even start work, so I squat hard and heavy most weeks unless my hips get really sore.

I prefer this approach and start my cycles low enough so that I can usually push through to new records over the course of the training cycle. As with any training program, realistic progression is the key to results. However, being able to move your own bodyweight with ease is really important in our job. Often you're hanging in harnesses, climbing at height, or manhandling another stuntman or actor, so it's incredibly important to be able to move your body through space with strength and explosiveness.

Even so, I've never been a fan of really high-rep work for bodyweight. I prefer to be explosive, as that looks better on screen. No one has ever asked me to do 100 push-ups, but they have asked me to move faster, often with heavy costumes on whilst climbing or crawling. As such, I prefer to do weighted body-weight movements like chins and dips instead of higher rep work. We go as heavy as possible and I often use the same modified 5/3/1 for chins and dips until it gets too heavy and things start aching, reps gets missed, or form falls apart.

If you choose to try this routine, you'll want to use at least 50% of bodyweight for both exercises and include the back-off set and the 50% set.

Chins and Dips with added weight

Another really simple way to get a lot of volume done quickly is to attach a weight to your body, say 20 kilograms (45 pounds), and do as many reps as possible in 10 minutes. You try to surpass what you did the last time.

The other things I often include for building strength are:

If you have access to a climbing rope, use it. Climbing a rope is harder than chin-ups or pull-ups and far more impressive. You'll get a great upper-body workout if you combine these plyometric pushups where you do a clap or two in between reps.

This is an underrated movement. Plus, since we had plenty of dumbbells and only one bar, it became a mainstay. I actually had everyone "cheat curl" the dumbbells to the shoulders and press them in one motion. You can do one arm at a time or do both together. Some of us were using the 80-pound dumbbells for sets of 12 on this and believe me, the whole upper body works. It's not unlike doing a strongman log clean and press in one motion.

I mean really heavy! Screw all that 1, 2, 3, 4, or 5-minute rubbish. Abs need to be strong. Even in rehearsals we take full-blown hits to the stomach from kicks and punches. Yes, you can "pull" your punch and that's what we're trained to do, but actors aren't. They usually just hit you.

Train planks with 30-45 second sets and work up to at least 40 kilograms (90 pounds) on your lower back. I've done over 100 kilograms (220 pounds) for sets of 30 seconds. Even better is to get someone to push, pull, and kick you whilst in the plank position. See how hard your abs, obliques, glutes, hip flexors, etc. have to work when someone's stomping or standing on your back! This is an awesome exercise for all combat athletes as well as powerlifters and strongmen.

You'll need a partner for this one. Remember when you were kids and you picked up your friend's feet and he walked around on his hands? Well, do the same thing but use an ab wheel. Hold just the feet or ankles and push them along until they're ready to drop. Make sure you're in sync with each other though as this one can get ugly if they drop and you keep pushing!

This is my go-to jumping exercise that can be done in any gym. There are a ton of variations. Choose one or two and think fast. Try not to pre-load. Instead, start from a dead stop.

You can do them one of three ways:

We had 30-45 minutes in the morning to get all of this done during Clash of the Titans. Here's an example of how we did this over 3 days:

This is just a brief example of how you could train under difficult conditions with limited time periods and still get stronger, faster, and better conditioned. We would stretch and do mobility work or rehab work in any spare moments. Film sets are notoriously all or nothing. Either everyone is running around like crazy or sitting around waiting for the director to line up a shot. You take the quiet moments to fit in any extra training. As I said before, you rarely get time to warm up before a stunt or action sequence.

As stuntmen, we have to find time to train because our bodies are how we make our money. There are no shortcuts and no excuses. If you're injured or not feeling well, trust me, on a film set, nobody cares. When a daily activity might mean walking through fire or jumping from a building, you had better be prepared.

If your training makes you sacrifice strength just to look good, it sucks. Get the best of both worlds with this brutal method.
Tips, Training
Corey Young July 4

The scale is just one tool for evaluating your progress, and not even a good one. Here's what you need to know.
Tips, Training
Paul Carter October 4

Everything you need to know to make your next workout the best workout of your life.
Bodybuilding, Powerlifting & Strength, Training
John Paul Catanzaro October 28