Step into a commercial gym around 5 PM any day of the week. Sure you'll come across some "strong" people who can lift heavy weights, but if you take a closer look, it'll become painfully obvious that most meatheads have simply lost the ability to move with any semblance of fluidity.

Poor daily posture leads to tight, inhibited muscles, which leads to poor movement, which then compounds the issue, which killed the rat that ate the malt that lay in the house that Jack built...and eventually we're left with serious inefficiencies and often injuries.

As avid T NATIONers, we know training to be anything but thoughtless and poorly contrived. We train hard week in and week out, and as readers we're privy to a constant flow of solid information and training advice, but no matter what our focus in the gym consists of, we come to T NATION to separate ourselves from the "regular folk" who are simply sheep in the flock.

Touching back on my original thought, however, many of us don't realize that the focus on mobility can elude us and when it does, it's something that can be very difficult to recapture.

This article isn't intended for you to change your approach to training, or to take away from your main lifts. However, many of these exercises can replace current techniques you use now, and with a little hard work and effort they can help take you to higher levels of strength and movement.

This short list is something you can incorporate in your current program that will help you lengthen your range of motion, build size and strength, and oh yeah, hurt like hell.

This is a great foundational exercise but can double as much more. In our young athletes, it teaches proper squat technique in regards to the pelvis and spine, and the kids find out how much mental toughness they have, fast. It's pure hell, and it's the last thing our athletes do on Fridays before they go home. In fact, they often crawl out of here!

The better you become at this movement, the more gravity just keeps assisting you into a deeper hold. You'll soon see some dramatic changes in hip mobility.

For anyone looking for size, loads and long times under tension can provide a great breeding ground for some new muscle.

Focus: Spread the floor apart with the feet. Drive the knees out while constantly PULLING yourself down using your hip flexors and abs.

This exercise is based on the standard split squat, just adding a couple of boxes to elevate both feet. By standing on boxes you'll allow for greater range of motion and that's precisely the goal of the exercise.

The athlete pulls himself deeper into the hole with each rep (3-5 second holds). This not only hammers away at those pesky tight hip flexors, it also develops a great amount of starting strength by working the athlete in his greatest (and weakest) joint angles.

If you're looking for some serious upper leg development, then try a few heavy sets of these and feel sore in some places you didn't even know existed!

Focus: Pull yourself into a deep position by pulling with the front hamstring. Flex and extend the rear leg glute as hard as possible. Always pull deeper on subsequent repetitions.

This is without a doubt one of my favorite exercises for developing the glutes, hams, and adductors.

If you're new to these be careful on your volume initially as you may find it hard to walk for a few days. Not only do they provide a tremendous strengthening effect on the front leg, but the dynamic flexibility component they provide to the rear leg hip flexor and rectus is incredible.

In some cases when we're focusing on the range of motion in the rear leg, we have the athlete bring the rear leg all the way through and up to waist height (you'll end in a position similar to a step up, with one leg on the box and the other knee driven up).

Focus: Stay tall with your torso. Carry much of the weight on the front leg when lowering into the lunge. Pull yourself back up to the box.

This exercise can be very humbling when you're not used to full ranges of motion.

The video below will show a 320 + lbs. bencher struggling on the sixth rep of a push up. The reason for the difficulty is the combination of the extreme joint angle (weakest point) and the accommodating resistance of the bands.

In my opinion, the deep isometric push up is one of the best scapular retraction exercises out there. By lengthening the anterior shoulder and pecs, you place the muscles that move the scapulae in the best leverage position to contract maximally.

For people who have naturally poor posture or jobs that require them to sit in poor posture all day, this exercise can be just the thing to help even out their overworked anterior body.

Besides postural benefits, this exercise can be great at developing strength and size in the upper back and will allow the anterior portion of the shoulder to get a solid stretch that could also translate into better recovery and muscle production.

Focus: Don't think about lowering with gravity. Pull yourself into the hold using your scapular retractors. Remember to squeeze those muscles of the upper back as hard as you can.

This may be the most difficult one in terms of perceived difficulty because it's the only exercise that's RESISTED by gravity instead of assisted. To make it worse, gravity won't be the only thing pulling you back down to earth.

Place a band around your waist and have a partner stand on the band. Alternately, you can hook the band under a rack or dumbbell.

While in the hanging position, squeeze/contract the muscles of your chest and triceps as hard as possible, which will protect the shoulders and allow the major muscles of the back to lengthen.

After a short hold (3-5 seconds), pull up with as much speed and power as possible. The band will kick in near the top and slow you down to a snail's pace. The answer to overcoming the added resistance? Pull HARDER. It's just you against the band, and of course Sir Isaac Newton's old buddy, gravity.

Focus: Start in the hang by squeezing the "push" muscles so the "pull" muscles can lengthen. Drive your chest towards the bar, and drive your elbows away from the bar as fast as possible. Most importantly, don't give up.

To reiterate, again I'm not trying to tell you what you're doing is wrong or that you need to replace all of your trusty go-to lifts with these options. I'm merely offering alternatives, ones that I think are of great importance and value to any serious lifter.

If you want to continue to train hard and heavy, there will someday come a time when quality of movement must be prioritized. Why not start now?

Fix your rounded back to feel, move, and look better. Here are three exercises that'll help.
Back, It Hurts Fix It, Mobility, Training
Maryann Berry May 4 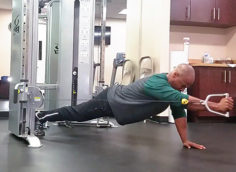 If you can hold a plank for longer than 10 seconds, you've outgrown the exercise. Progress it with this resisted variation.
Abs, Exercise Coaching, Tips
Kelvin King, Jr July 1