Lifters go out of their way to pull heavy things off the floor, yet many fail to make much progress due to a lack of upper and mid-back strength. Here's how to fix it.

Let's first address the elephant in the gym. Yes, rounding your back when deadlifting isn't ideal. And yes, there are plenty of examples on YouTube of guys pulling with atrocious technique and it's a miracle they haven't shit their spleen.

In most cases they deserve the criticism. But what dumbfounds me is when people watch a video of say, Eric Cressey pulling 650 pounds at a bodyweight of 170, and start playing technique police.

Many who watch Eric's heavier pulls will cry that he's rounding his lower back, when it fact most of the "rounding" is coming from his mid and upper-back.

This is significant because he, along with many advanced lifters in the same boat, has programmed himself to stay out of the danger zone, which is those last 2-3 degrees of end-range motion in his lumbar spine.

By contrast, he's reverted to getting a bit more ROM where there's more of a safety net (the mid and upper back). So, in short, no, he's not rounding his lower back.

Second, unlike the vast majority of beginner and intermediate lifters, guys who are pulling upwards of two to four times bodyweight have generally built up enough strength to literally not buckle under the pressure. They're able to prevent their spine from collapsing like a melting candle when things start to get ugly.

Sometimes it's as simple as knowing how to get out of compromising positions when they manifest themselves. In this context, playing the "strength and experience" card absolutely has merit.

There are many nuances I can touch on concerning deadlifting setup and performance:

All those cues come into play, but one aspect that often gets glazed over is the role the lats play. The lats are a huge muscle group that insert on the intertubercular groove of the humerus with attachment points all down the backside from the inferior angle of the scapula, all the way down to the iliac crest.

Anatomy nerds will go into how the lats play a role in extension, adduction, and internal rotation, but what many fail to recognize is their significant role in stabilization as well as transference of force within the posterior oblique chain.

In short, they're kind of a big deal, and are often the weak link for many lifters. And on top of improved stabilization, the lats also help keep the bar closer to the body once the bar leaves the floor. After the bar gets moving it's common to see the it "get away" from someone, and that's when things get ugly.

While verbal cueing and positioning will work nine times out of ten, sometimes it's just a matter of recognizing that A) your mid and upper back are weak and/or inhibited and we need to build some "stiffness" in that area, and B) we need to perform exercises that will address said issues.

Most lifters view the deadlift as, "There's the bar, I'm going to walk over, bend over, pick it up, and make it my bitch."

I love the attitude. But as with most things in the iron game, there's more to it than that. One major mistake is thinking that the deadlift is just that – a bar you just bend over and pick up.

First, we need to set the lats. In the past I've referred to this as setting the scapulae, and many mistook this as me saying, "Retract and bring the shoulder blades together."

In reality what I'm looking for is more posterior scapular tilt so that the shoulder blades hug the spine. If anything, we're looking for more scapular depression so that we can ensure the lats are engaged to a higher degree.

This often overlooked cue (where I tell someone to use the bar to pull their chest tall and to stiffen their upper back, thereby putting their lats in their "back pocket") will help many lifters because now the lats are firing and engaging the thoracolumbar fascia, which in turn will provide much more stability to the spine and help counteract shear forces.

Second, and possibly a more important point to consider, are any postural ramifications that may prevent ample scapular posterior tilt in the first place. If someone's rocking an overly-kyphotic posture to begin with – rounded upper back and abducted, anteriorly tilted scapulae – it's going to be near impossible for him or her to get into proper position to pull heavier loads safely.

In this context it would be beneficial to work on thoracic spine mobility with drills like the quadruped extension-rotation, side lying windmill, and bench t-spine mobilizations, respectively.

Moreover, including some simple exercises like standing band W's and prone one-arm trap raises, both of which activate the lower traps (and to help posterior tilt the scapulae), will also go a long ways.

As important and crucial as the corrective stuff is, we also need to lift heavy stuff to accomplish what we're after. Most obvious of all is to include more pulling movements into your weekly training repertoire to target the mid and upper back musculature: lats, erectors, rhomboids, and scapular retractors.

Fact is, if done wisely and with some attention to detail, it's possible to include either deadlifts or both horizontal and/or vertical pulling movements into the mix with every training session.

Snatch-grip deadlifts are a fantastic way to build a strong and wide upper back. This is my go-to variation when I need to pack on mass with my athletes.

They're also great for teaching lifters how to use their lats during the pull, as the wider grip helps recruit the lats to a greater degree. The snatch grip deadlift is also one of the rare occasions where I'll allow someone to use wrist straps, as grip strength is often going to be a major limiting factor.

I'll generally start people off with rack pull variations – just below knee height – and then progress them closer to the floor as they become more proficient.

For those a little more masochistic, the paused deadlift is about as brutal as they come. Essentially, it's a standard deadlift from the floor, but instead of pulling continuously until lockout, you pause at roughly mid-shin level for a 2-3 second count.

This teaches people to learn to use their lats and also serves as another way to increase time under tension, which improves overall muscle growth.

You can't be a hero, though, and use maximal weight. Instead it's best to start with roughly 55% of your 1RM and then work your way up during a given block of training. So a month-long block may look something like this:

I don't necessarily agree that the value of speed deadlifts lies in force production development and improving bar speed, although both enter the discussion.

The real value of speed work lies in the ability to perform submaximal work to hone technique and getting hundreds of quality reps in.

This isn't to say that traditional speed work as popularized by Westside Barbell doesn't work. I just argue that there's a hierarchy of needs for most trainees, and that allotting "x" amount of time to work on bar speed isn't high on the list when they're barely pulling their own bodyweight.

That said, there's considerable merit to including more submaximal work in the mix, but I'm just not going to label it as speed work for most people. Instead, I call it "technique work." There are two ways I approach this:

Here I'll have my athletes use heavier loads (in the 70-80% range) and have them perform a flawless rep every minute for "x" number of minutes. On top of ensuring quality reps, it's also a fantastic way to increase volume without crushing someone.

To progress, you can lower the rest interval by ten seconds each week until you reach 30 seconds. Or you can add in a rep or two so you're performing a double or triple every minute.

Perform a set of 5 repetitions with anywhere from 50-70% of 1RM, but each set is divided into five separate singles with roughly 10-15 seconds rest in between.

As far as overall upper back builders are concerned, it's doesn't get much better than bent-over rows. If I had to choose one rowing movement to make up the base of my upper back training, this would be the winner.

Exercises like deadlifts, barbell rows, and chin-up variations get all the accolades and undoubtedly are the go-to movements for sculpting a powerful upper back. However, one of the most underrated and underutilized exercises for this is the dumbbell row. The dumbbell row not only helps build a thick upper back, it's also a great movement for the lats.

Dumbbell rows are a single-limb movement, which carries its own advantages in that it's easier to ascertain if there's a strength imbalance or weakness between the left and right side.

Additionally, due to the minimal equipment needed, anyone can do them at any time. As simple as the dumbbell row might appear, it's surprising how much this movement is butchered.

Now before someone blows a gasket and goes all Kroc Row on me, it's advantageous, on occasion, to let technique slide a bit. But there comes a point of diminishing returns when the default pattern always looks like an epileptic seizure. To that end, here are my two favorite dumbbell row variations:

Start with the dumbbell resting on the floor. From there, pretend you're starting a lawn mower, "rowing" the dumbbell by bringing the elbow towards the hip, not just going straight up and down.

Effectively, you'll be "pulling through the elbow," finishing at the top by retracting your shoulder blade towards the midline of the body while simultaneously depressing the shoulder blade (placing it in your back pocket).

This is a superb variation that takes full advantage of the posterior oblique chain. Breaking it down further, there's also an anti-flexion component. By bending over at a 45-degree angle – which you don't do during a regular standing cable row – the spinal erectors get quite a bit of work trying to prevent shear loading. Not to mention, you get a fair amount of glute activation in the trailing leg.

Finally, and maybe less obvious to some, would be the multi-planar stability in the front leg, as the hip musculature has to resist the torsional forces placed upon the body – so there's also an anti-rotation component to boot!

In short, there's a lot going on during this exercise, which makes it a winner.

Getting better at deadlifting isn't just about deadlifting until the proverbial cows come home. We also must take into consideration one's weaknesses, and for many that's going to entail addressing lack of upper back strength, and, by extension, lack of lat engagement.

Including more of these drills will go a long way in terms of not only improving deadlifting technique, but also total pounds being lifted down the road.

Take a bodybuilding exercise, mix in an athletic movement and what do you get? A new way to add size to your shoulders and traps.
Bodybuilding, Shoulders, Tips, Training
Tim Arndt March 15 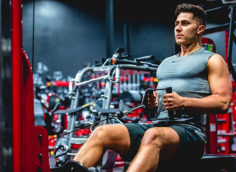