According to social media, the whole world is shredded and strong... but not you. Or at least it can seem that way when you're constantly bombarded with the highlight reels of Insta-celebs.

Don't let that discourage you, though. Let's look at some realistic expectations for muscle and strength, and then we'll get into the mindset stuff.

Genetics will always play a role in determining the ceiling of your potential. But your starting point can often give you a good clue about how high your ceiling is.

If you were known as the "ripped guy" in high school or deadlifted double bodyweight the first time you went to a gym, chances are you drew a decent genetic hand.

But even with genetic variation, we can still put out some guidelines to set the standards for what's good (or not so good) when it comes to muscle gain and strength.

In a perfect world, you may be able to put on 1-2 pounds of muscle per month. We're talking great training, excellent nutrition, being reasonably new to resistance training, and having very little stress.

Scoffing at these numbers? Well, if you saw someone after not seeing them for a year and they'd put on 24 pounds of muscle, you'd be blown away. Realistically, in this "ideal" situation, you could expect 10-20 pounds of muscle gain.

If you're an experienced lifter, your expected rate of muscle gain is going to be much lower. Once you've been lifting consistently for a few years, you should be pleased to put on a couple pounds of muscle in a year. Ladies, to get a good idea of what to expect, halve these numbers.

Keep in mind we're talking pure muscle weight here. Your scale weight could increase by an extra 50% by the time you take into account the weight of associated glycogen and water (and that's assuming little to no fat gain). So with the above "perfect world" scenario, that magical 24 pounds of annual muscle gain could leave you about 40 pounds heavier on the scale.

The next question will invariably be:

Sure, go for it. You can expect to add 26-40 pounds of muscle tissue throughout your lifting career. Remember, this will come with around 50% extra scale weight (assuming you're roughly the same body fat percentage), leaving you 40-60 pounds heavier. For ladies, again, it'll be around half of this.

This is compared to your pre-resistance training adult bodyweight. So if at age 21 you weighed 176 pounds un-trained, you'd be looking at 216-235 pounds as your max range of muscle gain, assuming zero fat gain.

How long will it take to get there? That'll vary, but if we use our 176-pound example and the growth rates above, it might look like this:

This is being generous in terms of assuming consistent, quality training and nutrition, plus no lay-offs, injuries, or lifting interferences. This is just an example, but it gives you an idea of how slow progress can be AND to enjoy those newbie gains while you can!

With the increasing popularity of strength training and strength sports, the upper limit seems to be getting pushed higher at a fast rate. World records are climbing, and more "freaks" are appearing every year. This makes it hard for us to decipher what constitutes strong for us mortals.

Luckily, we can use strength standards as our guide. I've laid out some fair standards for most of the population to shoot for in the three powerlifts. And depending on where your numbers are within those standards, you'll fall into one of the following categories:

Since people are usually built for one or the other, go with your strongest.

Let's get into the social media head games. There's a host of things going on that will distort your perception.

First, most of the fitness folks you keep tabs on are people who are at the top of their games. They're people you find inspiring and impressive and want to learn from. So, naturally, this will be reflected every time you're scrolling.

You could easily fix this by only following average Joes, but chances are you wouldn't learn much or get particularly inspired. Sorry, Joe.

The more popular a post is, the more chance a platform's algorithm will push it onto your feed. This means you're more likely to be shown a video of a guy squatting 800 pounds than you are a guy squatting 300. That same algorithm will also track what you spend time looking at and push similar content to you.

Furthermore, once you've decided that everyone in the world is bigger and stronger than you, confirmation bias (preferentially remembering details that confirm your existing viewpoint) will further reinforce this.

Combine these factors and you end up with a pretty distorted perspective of what the "average" lifter looks and performs like.

And let's not dismiss the effect of drug use. PED use is much more common than most think. Without throwing accusations around, if a person is famous for how they look or perform, there's a good chance they aren't entirely "natural" (whatever the hell that means now). Again, that makes it more difficult for people to set realistic expectations.

I'm not condemning those who use performance-enhancing drugs. The only individuals who should be chastised are those who use PEDs and then purposely mislead others, or even worse, compete against those who do not.

Sure, there are definitely a few circumstances where you can put on muscle and gain strength at an increased rate, but don't let it bother you if that's not what you're experiencing right now.

And certainly don't let social media make you disillusioned with your goals. Your perception of your progress is inaccurate if you're comparing it to what you see online. 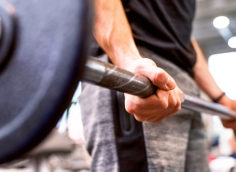 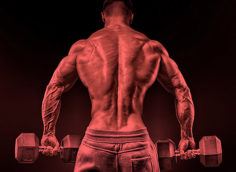 Strengthen this muscle group and you'll get stronger at damn near everything.
Back, Tips, Training
Christian Thibaudeau June 27