Just under two weeks ago while working on my perfectly sculpted abdominals (actually they look more like a scrambled jigsaw puzzle), I was reminded of a conversation I had a few years back with a former high level discus thrower turned coach.

I was fairly new to the world of training and I was a complete stranger to Testosterone Nation altogether, so my only resources for knowledge were books and coaches in my proximity. Not to downplay my old resources at all, but T-Nation made it a wee bit easier to get great ideas and information out to the public.

The coach and I had made plans to get together for a workout and go over some of our newer ideas and pretty much just get a crazy workout in. While warming up for a set of cleans I asked the former thrower how he trained his core.

While doing a trunk twist he looked at me with confusion and asked, "What's your core?"

I laughed and said, "You know that thing you're 'twisting'? All those muscles in your midsection where your hips abs and ass muscles meet up!"

"Oh, those muscles," he said with a smile. "I didn't know that's what they are calling it these days."

I told the coach that many of the articles I'd been reading at that time were discussing how important core strength is to bettering athletic performance. According to the experts of that time you had to stand on a wobbly disc, balance on a ball, or squeeze in your ass cheeks while drawing in your belly button in a strange position to "engage the deep sleeping abdominal muscles" we all seem to forget about.

I explained some of these techniques and concepts I'd read about and he seemed to be intently listening to what I was saying. Apparently I was mistaken about the intention of his furrowed brow.

After he realized I was done with my sermon he slapped another 45 lb bumper plate on the bar and said, "Jeremy, have you ever taken a look at some of the people who write this shit?" He then bent down and ripped the bar off the ground so hard you would have thought the plates were hollow.

After I stopped admiring the clean he just snapped off, I asked him what he was getting at with his last question. He dropped the bar to the ground with a thud and answered with a stern look on his face:

"Have you ever noticed that not one of them has ever been considered an athlete? In fact, most of these people don't have an ounce of muscle on their 120 lb-frames. These people have no clue what makes an athlete, because they have never been one, plain and simple. Listen Jeremy, if one of my athletes is injured I'll send him to a therapist or one of these so called experts, but if he's weak I'll send him to the weight room."

Everything he presented was contradictory to everything I'd been reading so I was understandably confused. "So you don't do any special exercise for your core, no ab work, no stabilization work, nothing?"

Struggling to grasp my confusion he explained, "Of course I work on stabilization, just not in the same way you've been reading about. I don't have time to waste 20 minutes a session having an athlete balance on an inflatable disc."

"So there are other ways to train your core? Well how the hell do you do it, because I saw you throw the other day and I'm not sure that thing has landed yet. You must be doing something right, there must be some secret to your core strength!"

"I lift heavy weights, you dope," he snapped back at me. "I back squat, front squat, power clean and snatch, I deadlift, bench press and do pull ups.

"A couple days a week I sprint and throw medicine balls around the gym. Oh yeah, I also throw the discus about 50 times a day. I, like my athletes, don't have time to waste on cute exercises designed to target your abdominal muscles, so I incorporate them into my strength movements."

I started to realize why he was such a powerful thrower, but the concept of strength exercises to help your core was foreign to me so I asked him what the hell he was talking about.

He directed me over to the dumbbell rack and told me to grab the heaviest dumbbell I could get overhead. "Now take a stroll around the gym with it locked out overhead and tell me what you feel."

Sure enough my core was in overdrive trying to stabilize my body and prevent myself from dropping the weight or falling over. "Amazing!" I exclaimed, "You got any other ones like that?" The coach pulled one or two more tricks out of his bag but told me to figure some out on my own. I thanked the coach for his help and for giving me a whole new outlook on core stability.

Later that day I went over to my gym and messed around with DB's and movements for about an hour and came up with a few good strength movements that really blasted my core.

This was a big step for me as a trainer because I could now utilize more time for important strength work and not have to direct attention solely to core work. Of course, we'll always stick to our guns and do Olympic lifts, squat variations, push and pull movements, and tons of hamstring work but I feel that adding little exercises like these can really add to a program's overall benefit.

I took those few exercises that the coach showed me along with a few of my own from that day and came across a ton more over the years and have built up a nice little library of strength exercises that incorporate the core.

Here are a few of my favorite ones:

We classify this as a non-explosive, total body strength exercise. This movement blasts the shoulders while utilizing leg and core strength. The alternating action of both the arms and legs requires coordination, timing, and balance – qualities that are essential for any sport.

We like this movement because it allows us to start the athlete out with light enough weight so that form is foremost. During this exercise you'll feel a good hip flexor stretch as well as core stability. Both of these add to the already valuable leg strength we all know lunges provide.

This version is truly a ball buster. It challenges the body from head to toe and helps the athlete start to build a level of what some coaches' call "supporting strength." With a close grip on the plate it's very hard to keep the arms straight, so we cue the athlete to continue to press the plate upwards while they lunge down.

This is another exercise that works your body from head to toe. This version allows the athlete to use more weight to load the body. You'll find this exercise challenges the athlete's balance, mobility, and the ability to support weight overhead. This is one exercise that should find its way into more athletic training programs.

This one is simple. Just use one dumbbell at a time and put your other hand on your hip. Make sure you come all the way down and touch your chest. Your body is going to feel like it wants to flip off the bench. Don't let that happen; keep your core tight, lock yourself in, and grind out the reps.

(I got this one from Ethan Reeve, strength and conditioning coach at Wake Forrest. He's definitely a coach you guys should check out.)

I'm sure most people have always thought of dumbbell rows as a great way to put some muscle on the upper back and lats. We, too, know the importance and usefulness of these exercises, but have modified them in order to utilize the core stabilizing muscles at the same time. While performing the row we have our athletes use their own core and body to support themselves instead of leaning against a bench or the dumbbell rack.

This version demands a strict position using your core. It puts the athlete in a split position with one hand on the knee and the chest at a 45-degree angle to the floor. This version is much harder than the dumbbell row using a bench as support.

This version is even a little harder than the last because the athlete has no support from the other hand. The stance is either in a split position or from a sumo stance (as seen in the video). The isometric sumo position will strengthen the low back and hamstrings while working the core and, of course, the upper back.

I like this exercise because it develops power and timing, can provide an eccentric overload, and forces the athlete to brace on the opposite side. It's very difficult for many athletes to keep their shoulders square and not cheat by leaning towards their unloaded side. Make sure to cue the athlete to stay level or perform the lift in a mirror if alone.

We came up with this by messing around the gym one day. On this exercise your body will have a tendency to sway to one side. Don't let that happen; brace yourself and lock in. Get your chest opposite the arm you're using to touch the bar on each rep.

Many readers have probably seen this exercise before. I like the push/pull feel of this exercise. Also, like all push-up variations, you'll always have to brace throughout the core. I like this as a repetition exercise for our football lineman, as they often find themselves pushing and pulling in the trenches.

Let me just tell you that high-box step-ups alone are a great exercise, by now add weight to your opposite side and it ups the ante just a bit. Try not to push off too much with the opposite leg and make sure to control yourself eccentrically.

Throw some of these exercises into your routine and I'm confident that you'll see an improvement in your total body strength and core stability.

One of the world's most successful and respected bodybuilding coaches sounds off on training techniques, excessive drug use, and what it means to coach with a capital C.
Bodybuilding, Training
Nate Green November 5 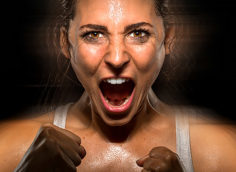 Who needs a coach, trainer, or superior workout partner when you can do this? A low-budget solution to a big-budget problem
Training
TC Luoma October 17

Want bigger arms? There are four keys things to remember when it comes to training them. Check ‘em out here.
Arms, Bodybuilding, Training
John Meadows January 10