There's one question I can't stand hearing and it's "How much can you bench?"

If I had a quarter for every time I've heard that damn question, I could quit my job. Either that or stay parked in front of a pinball machine for 16 years. Virtually any trainee (male trainees, at least) that's ever set his fungal ridden foot in a gym or even remotely looks like he trains, has been asked this question – and probably more than once.

Generally, when discussing training goals, strength is one of those things that's lumped with money, love, sex, or intelligence – you can never have enough of it. And most times, this is true – especially if you're an athlete.

I don't care what anybody says (because, believe it or not, I have seen it argued the other way), if you're comparing two athletes of similar size, skill, and experience, then the stronger one has a distinct advantage. Even if you're not an athlete, training for strength has its many advantages, be it making you healthier, making daily "chores" (such as mowing the lawn, shoveling snow, washing your car, etc.) easier, leading to a better looking body for the opposite sex, or anything in between.

More often than not, when a trainee begins a strength training routine, he'll usually follow the tried and true idea of lifting heavy weights for low reps with a good deal of rest time (both between workouts and during the workout itself). Programs such as these are generally geared toward the trainee who wants to increase brute (limit) strength. The result of programs such as these is generally increased 1RMs (one rep maximums) in any given exercise(s).

That's all well and good, but there's a slight problem. Most trainees that train for strength aren't necessarily in need of strength. What they are in need of, is strength-endurance. The problem with programs that focus on increasing your 1RM is that, sooner or later, you're going to need to exert that strength for longer than the time it takes to do one rep.

Baseball: Unless you think you're going to hit a home run on the first pitch every time up, or that you can take 4-5 minutes rest between pitches, you'd better be ready to swing not only hard, but often.

Football: Plays generally last 30-45 seconds with rest periods of approximately the same (or maybe a little longer). You need to exert as much strength as possible during the entire play, every play.

Hockey: Activity may last up to 5-6 minutes (or more) without stopping. You'll more than likely be interspersing short, quick bursts with slower, less intense ones. You need to be able to "tap" that strength reserve at any time – and have full use of it.

Boxing/Martial Arts: Many of the same demands of hockey (if not more so) are needed here. Depending on the style of match or fight, you may have to go multiple rounds of a few minutes in duration or may just compete non-stop until there is a winner. You need to be able to utilize as much of your strength as possible at any time.

Apply these same ideas to anything you might do in daily life, be it the examples I've given, or activities as simple as bringing in the groceries, re-arranging your living room, carrying a heavy backpack, or carrying a naked cocktail waitress over your head. Unless you can complete your activity in around 10-20 seconds, you'll be dependant on strength-endurance more than you will brute (limit) strength.

Now, you might be saying, "But Wiggy, it sounds to me like you're talking about cardio or conditioning training." To a large extent, you're right. But, that's because good conditioning and good strength-endurance go hand in hand.

Hell, I've seen plenty of lifters in my day who had good 1RMs and could ride the stationary bike forever. But get them in a real world situation like some manual labor or some sort of "pick-up" game, and you find that their strength quickly goes out the window.

Don't believe me? Check out what Dave Tate of Westside Barbell fame recently stated in T-mag #264 about powerlifters (who you'd think would have little to no need for strength-endurance or conditioning): "If you think you can excel in any sport without a base level of conditioning, you're out of your mind. The days of over-fat, bloated, can't breathe, can't sleep powerlifters are over!"

The reason for this lies in the trainee's style of training. The ever-popular S.A.I.D. (Specific Adaptations to Imposed Demands) principle tells us that our bodies will adapt to, and prepare for, the stresses placed specifically upon it. Or in other words, if you consistently train with low reps, heavy weights, with a lot of rest time, your body will adapt by being strong for one short burst, but will then require a decent rest period. As was discussed above, this isn't that useful in athletics or everyday life! What's needed is strength-endurance, or the ability to be strong over an extended period of time.

Tradition tell us that to train for endurance, we need to use sets of higher reps with lower weight.

If we're looking for increased strength endurance, then we want to be as strong as possible for as long as possible. So, instead of giving it your all for one quick burst and then crapping out, you want to be able to keep exerting yourself for extended periods of time.

So How Do We Increase Strength-Endurance?

This is pretty much a "no brainer." If you want to get strong, you're going to have to lift heavy. Cycling's good and is needed for proper muscular recovery, but you have to get to the point that you're lifting as heavy as possible.

The idea behind training to increase strength-endurance is that you want your body to be able to exert maximum strength when not fully recovered aerobically. You also want to train your body to recover faster. Or, in other words, when you're under maximum strain, you want to recover quicker from that strain. Also, you want to either sustain said strain longer or sustain it multiple times in quick succession.

If you're not doing a fair amount of reps overall, you won't increase any kind of endurance – strength or otherwise. It's doing a large volume of work (coupled with shortened rest periods) that will give you endurance. When that's coupled with heavy weights, then you develop strength-endurance. Think of it like an equation:

Now that we know what we want to do, how do we do it? We've already figured out that light sets of many reps (say 3-4 sets x 12-15 reps) aren't the answer, as we need to lift heavy. However, if we lift heavy, then we can't use higher reps.

A routine such as this allows us to:

• Shorten rest periods (it doesn't take nearly as long to recover from a couple reps as it does 12-15, so you can get to your next set more quickly)

When I first started experimenting with this style of training, my 1RM for the Clean and Press was 210-220 lbs. However, I could do 185 lbs. for probably 3-4 reps before crapping out, and then I'd have to wait at least a few minutes to do my next set.

My body quickly adapted, however. I decreased the rest period every workout, and once I was at around 20 seconds rest, I increased the weight and started over again at 60 seconds. By Week 6, I was using 185 lbs. for 15 sets x 2 reps with only 15-20 seconds rest time. Or, in other words, I was performing 30 reps with roughly 85% of 1RM in just under five minutes. Do a workout like this with 3-4 exercises, and look how much heavy lifting you're doing over an extended period of time.

I've prescribed this protocol to plenty of other people who've had similar (if not better) results. 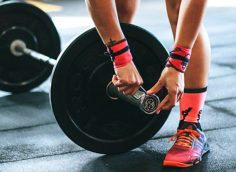 Warm up with this simple move and you'll be able to deadlift more weight safely. Check it out.
Training
Tom Morrison August 10 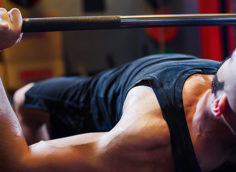 Reverse the rep and get stronger. Here's how.
Training
Jason Brown March 6