A fish looks stupid if you judge it by its ability to climb a tree. That's a paraphrase of a quote about intelligence often attributed to Albert Einstein. It's true, expecting a person to accomplish something he's not qualified to do is ignorant at best. At worst, it's sinisterly injurious. Especially when squatting.

The problem is that we think too narrowly about squatting and force ourselves to use the barbell – or other ill-advised implements – when it's not suitable for us. In return we shortchange our progress and increase our chances for injury.

But it doesn't have to be that way. By establishing a working squat definition and asking a few questions, you can determine if you're doing the wrong squat.

What Should a Squat Do?

Before we discuss minutia, let's talk about what a squat should accomplish. This provides us a reference point with which to plot all our discussion points. Here goes:

A squat loads the hips and legs while limiting movement and undue stress elsewhere in the body.

That's a simple definition we can agree on. We understand that the squat is a big, stressful movement that recruits a lot of muscle mass.

And we further understand that the joints away from the hips, knees, and ankles remain relatively motionless, that the contraction of the upper-body is isometric. It's a big movement that makes us systemically strong while emphasizing the lower body.

Notice that the definition is devoid of any reference to a barbell on the back. In some instances, for some people, the barbell destroys our purposeful, working definition. Movement comes from the wrong places instead of the hips, knees, and ankles.

Now, if the squat you're using doesn't fit that definition, we have changes to make. 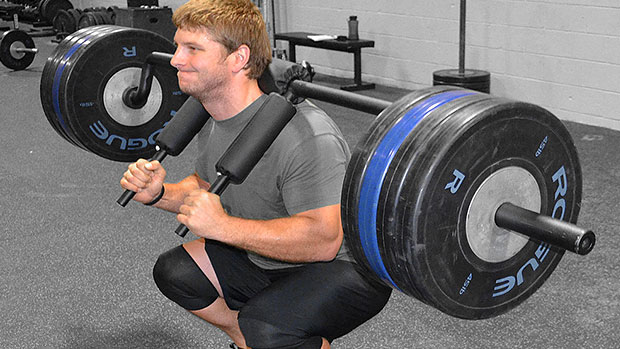 Why Are You Squatting?

What's the end game? Why squat at all?

I know, only weight-glove clad, cheat curling jackasses don't squat. But seriously, there's no ego attack hidden in this question. Examining our why makes determining the what and the how much simpler.

Chances are your why is filed under one of these categories (or is a combination of a few):

There's only one why listed that requires training a barbell squat – competition. If you're stepping on the platform, you'll have to train with a bar on your back.

The other reasons, however, don't require a barbell stapled to the traps. They're just as effectively trained using other aggressively loaded squat variations. Case in point, there are a lot of big, strong SOBs that use the safety squat bar, the front squat, and the Zercher squat.

Training is like a Choose Your Own Adventure bookin that there are many paths to the same outcome. We might have the same goal, but we certainly don't have to achieve it by the same means.

With this mindset, we choose the necessary tool that makes us bigger, stronger, or faster. But how do you determine what squat is right for you?

Determine what you can do by determining what you shouldn't do. It's a simple, effective premise. Here are three self-assessment questions to determine if your squat training is wrecking you:

1. Are You Giving Away Movement?

All movement comes at a cost. We want the hips, knees, and ankles paying the squat toll. But inability to achieve range of motion from these joints dumps us into poor positions that steal movement from adjacent joints.

It's simple – you're giving away movement. Joints are moving that shouldn't be moving.

If you're dealing with butt tuck, excessive spinal extension (you can't keep your low-back or neck from arching), or you're making constant foot adjustments, you're giving movement away rather than paying the proper price. You're loading your body inefficiently and paying an inflated movement cost.

2. Do You Have Poor Squat Recovery?

The tissues that comprise our musculoskeletal system have a limited reserve. Loading them inefficiently saps that reserve in a hurry.

Squatting inefficiently, by using a variation unsuited for your frame, conducts aberrant stress through your system, taking more from your muscles, joints, and ligaments than efficient movement does.

It's why some people strangely recover better from deadlifting than squatting – they achieve better joint position and distribute stress evenly throughout their tissues.

Lack the biomechanical right stuff to squat in good position and you're offering your tissues a job they're not prepared to do well. They'll do their damnedest to get the task done, but afterward they raise a stout middle finger in the name of soreness and poor subsequent lift performance.

Do you feel like you've made bodily contact with moving train after each squat session, even those loaded lightly to moderately? Do you get asymmetrically sore or get sore in weird places after squatting? If yes is your answer to both questions, you're probably doing the wrong squat.

If it hurts, don't do it. Your high school nurse with the weird mole on her left cheek and ruthless halitosis could tell you that. But seriously, does the squat you train cause pain? Maybe the barbell wrecks your back for the rest of the week. Perhaps squatting at or below parallel causes knee pain.

Pain could, of course, be caused by any number of things. It's also subjective. But it's a good indicator that you're doing something wrong, or, at the very least, something unsuited for you. 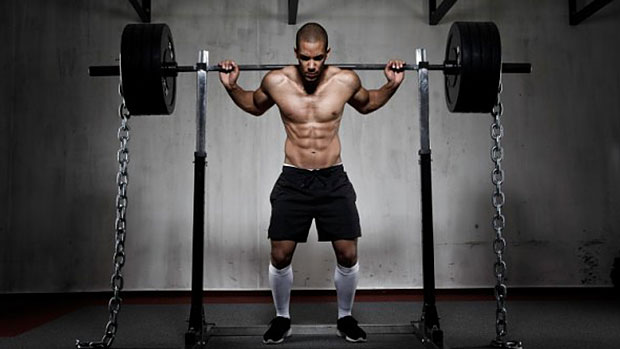 We go further down the squat-selection rabbit hole by asking another simple question:

Does your body have the raw materials to perform the task you're asking it to perform?

It's simple to think in training homogeneity, that we're all alike and can achieve the same joint positions, but that's not reality. We all can't handle the same stressors because we don't have the exact same raw materials.

Each human is equipped with different levers, each carries his own movement inadequacy baggage, and each has a skeleton closet of injuries. Some lifters have long torsos and short legs while others are inversely proportioned. All of these factors add up to squatting stress.

It's visible when you attempt to squat, dump your chest forward, and abruptly stop three inches north of parallel. Your training buddy mutters that it looks terrible. Of course it does – you're asking your body to do something it's not capable of doing well. You're setting up for failure, not success.

This, of course, is a general example designed to offer perspective and not specifically extrapolated to anyone. But the point remains, we can generate specific solutions by considering typical squatting problem areas like the thoracic spine, the shoulder girdle, the hips, and the ankles and how they relate to squatting insufficiencies.

What's more, we can examine our shortcomings to identify our problems and generate training solutions.

Before we talk solutions to specific problems, let's make sure we're clear:

Now, let's examine what squat variations meet the definition we agreed on and put us in good positions to squat successfully despite our limitations. We'll identify and then apply our solutions to each potentially squat-sabotaging body region.

Keep in mind that the solutions for each problem area assume that all other areas are held constant and aren't badly behaved. You might have more than one problem area. In that case, cross-reference each section to individualize your solution.

We're also assuming that you understand what a good barbell squat is and are still unable to achieve it despite sound coaching. 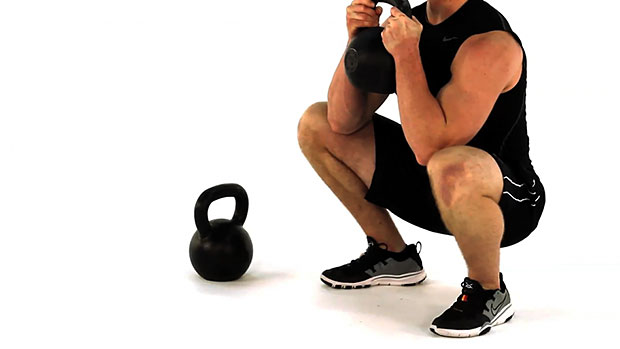 These squat variations limit the need for thoracic spine extension in comparison to the barbell squat. By using them you'll impart less extraneous stress on the body and still train like a mad man. 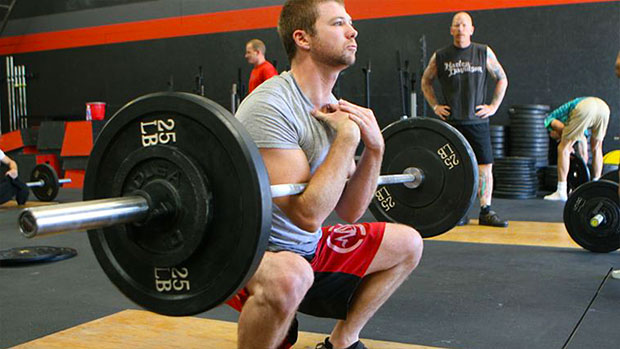 If you lack sufficient shoulder range of motion, these are your squats. They ask nothing more of the shoulders than to hold the load in place. 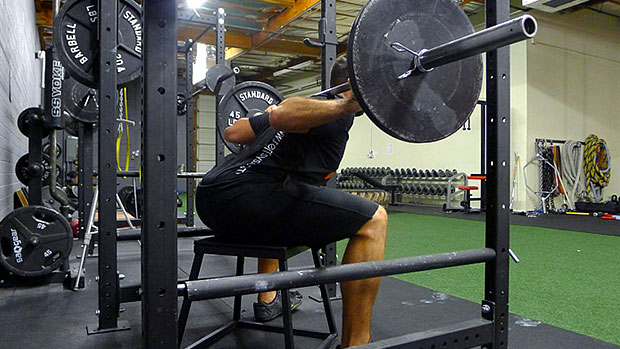 These will keep your hips in a range that allows them to work without taking movement from the low back. You'll load the legs up and attain brutal strength without wrecking your lumbar.

These are also great for folks with long femurs and short torsos. They allow for a proper exploitation of such levers while avoiding detrimental ranges.

The shins are always perpendicular to the ground during the box squat. It requires miniscule ankle mobility. Box squats are also great for lifters that hinge better than they squat because the hips are loaded more than the knees.

There are a lot of good training splits out there. Here's a great one most lifters have never tried. Check it out.
Tips, Training
Chad Waterbury March 19