Although you're probably tired of hearing about "secret" Soviet training programs, the Soviet track and field teams really were dominant in the Olympics. One reason is the work of obsessive sport scientist Yuri Verkhoshansky who created a hugely successful training protocol based on jumping drills.

He'd have athletes drop from 60-inch boxes in what he called "depth jumps." Specifically, an athlete drops off a box, lands briefly to absorb the shock, and then immediately jumps as high as possible, which led to a 14% increase in maximal strength among highly-trained volleyball players.

Even so, I wouldn't recommend them for most athletes unless they've got great squat form and strength. There are, however, safer alternatives.

We can activate the same beneficial mechanisms found in the depth jump with Russian kettlebell swings. How? By placing an emphasis on the downward (eccentric) portion of the swing.

Instead of absorbing the weight of our own body, as we do in depth jumps, we absorb the shock of the kettlebell when it switches directions. The more we force the kettlebell down, the greater the plyometric effect.

In the lab, Brandon Hetzler found that experienced kettlebell instructors could swing a 32-kilogram kettlebell back down with a force equivalent to three times their bodyweight. Most of the beneficial effects of kettlebell swings come from when we reverse force, so the more force there is to reverse, the more strength (and explosiveness) we'll gain.

Kettlebell swing over-speed eccentrics can be done in three ways.

Don't do these over-speed eccentrics with higher reps. You're taxing the nervous system a lot more than you would with regular swings. Ten or fewer reps is a good rule of thumb.

Verkhoshansky also created multiple apparatuses to create a similar "depth jump" effect with the upper body. Picture a bench-press type device that drops the weight down on top of you and then allows you to explode it up. (Please don't try creating this type of gizmo at home as Verhoshansky's device had built in safety features.)

However, we can mimic this effect with drop push-ups.

To do these, create a stable base of about 12 inches high, just outside your normal push-up stance.

Doing this type of "depth jump" training can build enormous amounts of explosiveness. It can also serve as a nice adjunct to your traditional training by providing a bit more explosive power.

For most people, I'd suggest doing the following program to break out of your plateaus. It takes about 6-10 minutes and should be done three times a week.

A note of caution, though – this program is only for trained athletes who exhibit good control of their movements:

There are three main reasons why kettlebell swing over-speed eccentrics and drop push-ups (and depth jumps, of course) build explosiveness and strength:

Basically, we're learning to load our muscles with potential energy for later release. These movements could be quite helpful for any sports that incorporate lots of changes of direction as well. 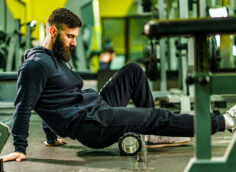 Prepare for battle! This warm-up routine only takes about 10 minutes, but you'll head into your workout feeling unstoppable.
Fix It, It Hurts
Dr Dale Bartek December 9 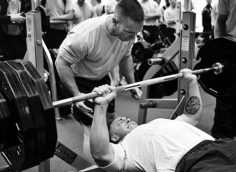 Get them both by tweaking this big-three movement. Here's how.
Tips, Training
Dr John Rusin December 27
Originally coined "The Bear" by John Davies, this series of five exercises in one teaches the body to move with great ROM in a fluid, powerful, and fast manner. It's fantastic as a total body warm-up, improving overall power production and motor skill coordination in a short period of time.
Training
John Paul Catanzaro November 2