Whether it's the back of a bodybuilder like Dorian Yates or
Ronnie Coleman, a powerlifter like Ed Coan, or an Olympic lifter
like Pyrros Dimas, big backs are a byproduct of moving heavy iron
for an extended period of time. You can't pump and cramp your way
to a big back.

One of the all-time great movements to develop your back is the
row. In fact, it's so good I devoted an entire article to the row
and its variations in Wanna Grow? Gotta Row. While I gave some
great tips on proper execution, I've come to the realization that
tons of people still don't understand how to row correctly.

Rowing variations will develop three primary muscle groups: the
middle trapezius, the rhomboids, and the latissimus dorsi. For the
sake of brevity, let's examine the muscles of the mid back (middle
traps and rhomboids), as they are typically our primary
target.

Note that in the above paragraph I did not mention that
the spinal erectors are targeted here. This may come as a shock to
many who are writhing around instead of performing a clean, strict
row, but we'll get into that later. Just remember that the target
is the mid-back and we're good.

When rowing, the primary movement we're looking for is scapular
retraction, or a pinching together of the shoulder blades. In fact,
as you'll see, focusing on or visualizing the movement of the
scapulae during a row is a sure-fire way to help improve your
performance.

This is where things get fuzzy. I can't tell you how many quirky
variations of rows I've seen in the gym. Regardless, there's a
right way and a wrong way to row. Hopefully this next section will
help.

Regardless of which bilateral rowing variation you've chosen
(bent-over, low cable, inverted, etc.), the basic principles must
always be adhered to. Start with your elbows extended and allow
your shoulder blades to protract, or "drift," to get a slight
pre-stretch on the middle traps, rhomboids, and lats.

From the stretched position, think about pulling through your elbows and actively squeezing the shoulder blades back and
together. As you perform this part of the movement, make sure to
stay tall and don't lean back! If you have to lean back, chances
are the weight is too heavy.

As you return to the starting position, think about allowing
your shoulder blades again to "drift' and glide around your rib
cage until you get a stretch in the mid-back and
lats.

If you're performing a single-arm/unilateral variation,
performance should be identical. One flaw you'll see quite
frequently, however, is where someone substitutes torso rotation
for scapular protraction and retraction. Keep the torso rigid
throughout. Whether you're using a unilateral or bilateral
exercise, the key to proper execution lies within the shoulder
blades. If you can imagine your shoulder blades gliding from front
to back, you'll be that much closer to performing a flawless
row.

As I stated before, the row should be an extremely easy
exercise, but very rarely do I see people performing it correctly.
Maybe I'm just a stickler when it comes to technique, but I also
expect that if you include an exercise in your program, you
actually want to get certain benefits from its
inclusion!

This is quite common, and something I've only recently started
to notice following a lengthy discussion with Bill Hartman. When
you see someone who is rhomboid dominant try to row, they are
constantly holding a slightly retracted scapular position. Instead
of allowing the rhomboids, lats and middle trapezius to stretch at
the beginning and end of each repetition, they maintain a slight
retraction.

A verbal cue may be all that's necessary. If not, try using a
partner's hands to "guide" the scapulae into protraction. More
times than not, though, you'll need to drop the weight and groove
your technique from there.

We've all seen this guy before. He's got huge friggin' arms and
he wants to use them on every single exercise, even ones where he
shouldn't be emphasizing them!

Instead of pulling cleanly through the elbows, Johnny Biceps
wants to "curl" the weight instead of row it. This is very easy to
spot as there's minimal retraction at the midpoint, and quite often
this person can't even get their hands to the
chest/abdomen.

To rectify this, have Johnny relax his biceps and instead think
about driving the elbows back. This simple cue will generally help
to engage the appropriate musculature while disengaging the
biceps.

Hinging at the lumbar spine

I'm going to say this once and for all: this is a weight-lifting
row, not a rowing exercise. If you're flexing and extending your
lumbar spine while rowing in the weight room, let me forward you my
contact information because you'll be needing some low back rehab
in the future!

When I was coming up I frequently saw magazines like Flex and
Muscle and Fitness where the "pros" (who probably didn't even write
the article), advocated flexing the lumbar spine forward to get a
pre-stretch, and then extending the lumbar spine to help initiate
with retraction.

Last time I checked, rows were a mid-back exercise, not a low
back exercise. Leave the low back out and focus on developing the
appropriate areas and you'll be just fine.

Leanin' back worse than Fat Joe

Leaning back when rowing is generally seen when someone has too
much weight on the bar (or machine), and instead of retracting at
the midpoint, leans back with their upper torso. This gives the
appearance (and to some extent the feel) of scapular retraction,
but is in fact a compensation that should be
addressed.

Don't lean back: you may end up looking like Fat
Joe.

If this person is doing everything else right, just drop the
weight a little bit and cue them to focus on staying tall and
retracting versus leaning back at the midpoint. With good cuing and
less weight, this problem is easy enough to solve.

Note: For extremely high-level strength athletes, there is some
leeway with regards to this tip. I'll concede there can be some
very slight cheating, but this should be reserved for the advanced
trainee. Of course, if you're 130 pounds dripping weight, you're not advanced and so you don't need to worry about this
technique. Leave it for the big dogs.

And for those of you who caught the Fat Joe reference, let me
say this once and for all: dude can't rap worth crap, but he'll
continue to get paid as long as he keeps Lil' Wayne on his albums.
Just my $0.02.

Torso rotation, our final flaw, is only evident in the
unilateral variations due to the rotational forces produced. In
this case, the trainee has a tendency to rotate around either the
upper thoracic, or in some cases, the lower lumbar vertebrae. This
is typically seen in someone who has poor scapular
control/stability.

To correct this flaw, think about "locking down" the entire
torso, making it as rigid as possible. From this position, focus on
allowing the scapulae to glide into protraction and retraction.
Dropping the weight is pretty much inevitable here.

A Progression to Get that Row up to Snuff

If you know anything about me or my training philosophy, you
know I like to have a progression or rationalization for everything
I do. If you can't rationalize why you're doing something, why are
you doing it? And along those same lines, if you're weak as a
kitten you don't need to progress into the most difficult
variations of any exercise.

Whenever you're working on technique, always utilize the
exercise that's the simplest to perform from a complexity
standpoint to ensure that you're doing it correctly. In other
words, if you aren't strong enough to do an inverted row yet, don't
do it! Start with a lower level exercise like a low cable row to
hone your technique and develop the appropriate
musculature.

I think it's interesting that even my really out-of shape
clients can almost always do body weight drills for the lower body,
but quite a few middle-aged men can't do one single pull-up,
inverted row, or push-up! Understand that body weight exercises for
the upper and lower body are different beasts, and treat them that
way.

Progressing on rowing exercises is pretty easy. I'll have my
clients start with a low-level exercise like a low cable or supine
row in the beginning to make sure they're performing the
exercise correctly and without compensation. Once they've mastered
this, we can either progress to a higher weight or transition them
to body weight variations such as inverted rows, dependent upon
their goals. For higher level athletes who aspire to more than body
weight mastery, you'll eventually need to come back to the big,
basic rowing variations and start piling on the weight to build the
back you desire.

As I stated in the beginning, big backs are way cool. While some
guys like to brag about their arm size, a big, strong back is
silent evidence that you've paid your dues with the iron. No
bragging required. 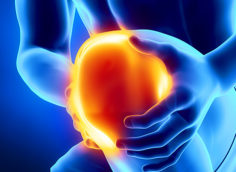 Keep your knees, hips, and spine healthy and strong with this exercise.
Athletic Performance, Mobility, Tips, Training
Lee Boyce September 3
While waiting at the DMV for my moped license renewal form, I decided to kill some time with one of my favorite childhood pastimes. No, not chewing tobacco and throwing rocks at whores. I'm talking about that crazy little word game known as Mad Libs.
Training
Chad Waterbury September 8 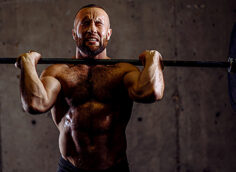 Build your overhead strength and your whole body will get stronger. Here are three tips to help you to do it.
Tanner Shuck July 17