There's a vicious rumor being spread by unknown parties that you should probably know about. Now, this rumor is pretty ugly so be prepared. Are you ready? Are you sitting down? Okay, here's the rumor: there are other abdominal movements out there besides sit-ups and crunches!

Shocking, I know. But I believe this rumor to be true. In fact, I think that if all you've been doing for abs is sit-ups and crunches, then it's high time you shake things up and remember what real abdominal soreness is all about. Although the following techniques aren't new, most people have never heard of them or haven't incorporated them into their training programs. That's too bad, because these are some of the most effective exercises out there and should be part of everyone's abdominal arsenal.

These rolling movements can be performed with a Swiss ball or an Olympic bar. However, the simplest and most cost effective method is to use a wheel, an "ab wheel" to be exact. You've probably seen these things in sporting goods stores for years. They resemble a lawnmower wheel with a little pole stuck through it that acts as handles. This little bad boy should run you ten bucks or less. Don't even think about buying one of those goofy versions that "assist" you during the exercise. These infomercial gadgets aren't nearly as effective as a cheap, simple wheel. More on that later.

Below, I've introduced two variations of the exercise requiring different functions of the abdominals. Here's one point to think about: do you wish to use the abdominals as prime movers or stabilizers? Both have their role in any training program; however, I'd be careful with the former method if you have an excessive kyphotic curvature (i.e. the classic hunchback posture). Too much spinal flexion without adequate extension could further encourage an imbalance.

The emphasis, however, must be placed on raising the butt as high as possible throughout the entire concentric range (the part where you come up off the floor.) And don't be afraid to extend your back under control at the bottom of the movement (after completing the eccentric or negative component) in order to start in a fully stretched position. Visualize looking like a sway-backed mule at the bottom and a mad cat at the top!

Make sure, though, as Dr. Siff recommends, that the elbow joints are locked while the hands remain vertically in line below the shoulders throughout this movement. Do this instead of rolling the whole body straight out until the arms and body are in one long line parallel to the floor. That sort of movement, as often seen on TV infomercials, can place unnecessary stress on the shoulders and lower back. 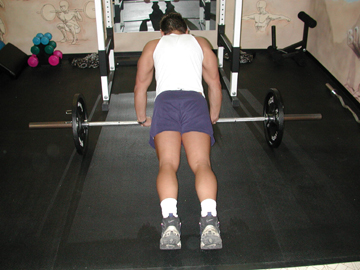 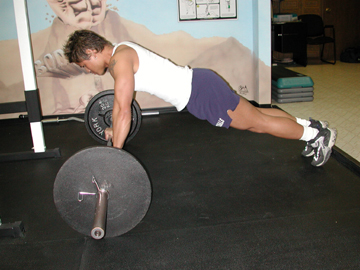 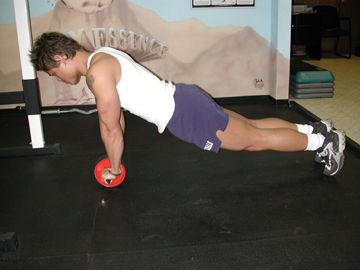 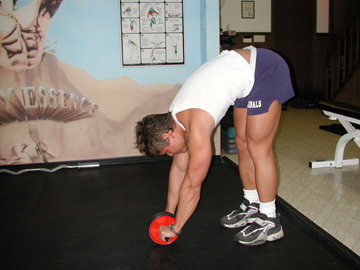 Some trainers utilize the forward Swiss ball roll as both an exercise and an assessment tool to determine the "stabilization threshold." However, transversus abdominus activation as a method of increasing intra-abdominal pressure and core stability has been under much debate lately. Research indicates that to maximize intra-abdominal pressure, you should breathe deeply (approximately 75% of maximum) into your belly and hold that breath, if possible, throughout the repetition.

Of course, if the tempo is very slow, you'll need to exhale (through pursed lips) to gradually release pressure. Keep in mind that the practice of maintaining a Valsalva maneuver (holding your breath against a closed glottis) is contraindicated in cardiac patients and hypertensive individuals (i.e. people with high blood pressure.) But, you'll notice that breathing, and in particular breath-holding, is an instinctive process. If you attempt to lift a heavy load, you'll naturally hold your breath. Try it and you'll see! As a matter of fact, this may sound nasty but it's quite natural to hold your breath in order to increase intra-abdominal pressure when you're sitting on the toilet!

Anyhow, I recommend that you neither push your belly out nor draw your navel in during this exercise. Rather, I want the core to remain "tight," maintaining neutral spinal curvature throughout. What do I mean by this? Well, each individual has his own unique neutral spine. The easiest way to find yours is to test both extremes (i.e. excessively arch downwards and round upwards) and then settle in a position somewhere in between. This could be safely assumed as the neutral position of your spine for this exercise. In this set position, only the bar, wheel or Swiss ball moves forward and back. 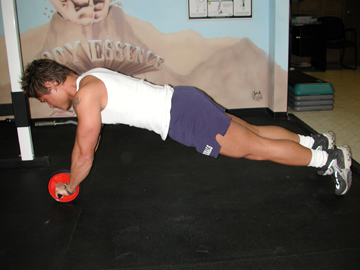 Both variations of the forward abdominal roll are safe for most individuals, assuming that you gradually increase the ROM every rep. (By the way, this same concept applies for dynamic stretching and is termed the "pendulum method.") Don't perform this exercise if severe shoulder problems exist or you've experienced a recent abdominal herniation. Also, if any soreness is experienced in the back, elbows or shoulders, then stick to the prime mover version and don't allow the hands to roll out from underneath the shoulders.

Beginners should start on their knees with a medium base of support (knees positioned hip-width apart.) When this becomes easy, you can progress to using your toes as the fulcrum with the legs fully extended. Advanced trainees should use a narrow base of support (with the feet together) and can elevate the feet onto a step to alter the loading. You can also take Dr. Siff's advice and use tubing or elastic bands to offer resistance. Cable resistance is yet another option. 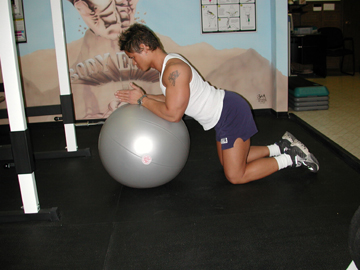 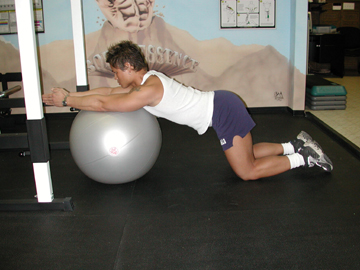 The training parameters are the same for both versions of this exercise with one exception: the tempo is generally slow during all levels of the stabilizer version, whereas speed of movement varies when the abdominals are used as prime movers. Here's a breakdown to help you customize your own program:

Resistance: Movement performed using tubing or cable (attaching the tubing to a post in front of you and grasping onto the other with both hands to provide resistance)

Let me just make a few quick comments on some of those abdominal devices that are so popular today:

1) First and foremost, nothing can take the place of hard work! There's no magic tool or pill that's going to instantly give you results. Remember that. You've got to put in the time!

2) The ab rollers that were so popular a few years ago have fallen out of favor recently and for good reason. According to rehabilitation specialist, Paul Chek, the neck muscles must work concomitantly with the abdominals. Taking these muscles out of the movement by resting your head on that ever-so-comfortable pad could eventually promote a muscular imbalance.

Plus, these machines don't conform to everyone's body structure. Probably more important than these factors are the results of a study conducted by Whiting et al. which suggests that abdominal devices (primarily ab rollers) don't elicit any greater or lesser involvement of the abdominal musculature than regular old unassisted exercises!

3) The Janda sit-up has recently resurfaced as an effective abdominal exercise sans hip flexor activation. Well, according to spine researcher, Dr. Stuart McGill, the opposite phenomenon actually occurs! During the Janda (or pressed-heel) sit-up, contraction of the hamstrings causes hip extension, which means that even greater hip flexion (or psoas activation) is required to complete the movement! In addition, bent-knee sit-ups actually activate the psoas more than straight leg sit-ups! This was all confirmed by EMG analysis in Juker et al., 1998. Unfortunately, Janda's hypothesis has never been substantiated by research.

4) As I mentioned previously, there are currently many devices on the market that simulate the abdominal rollout or forward ab roll. Don't waste your money on these fancy alternatives. As far as I'm concerned, the basic wheel is far superior because it doesn't lock you into a specific groove and it's more unstable. Why is being unstable good? Because research has shown that abdominal activation almost doubles on a labile (movable) surface. I believe the same results occur with the wheel. For this reason, it may even be the most effective rollout version available! So, forget all these infomercials with expensive imitations; the simple wheel is far more effective!

Walt Disney once said, "If you can dream it, you can do it." Well, let's put it this way, Cindy Crawford has appeared in my dreams a few times and has yet to appear on my doorstep needing my "extra special" personal training services, so there goes that theory! However, if you dream of washboard abdominals, with the right diet and the forward ab roll in your routine, that dream may one day come true. Roll on!

It's not just for shrugs. Here's how to add slabs of muscle to your back with the trap bar.
Back, Bodybuilding, Tips, Training
David Otey March 30

Could the Bulgarian squat be better than the King of Exercises? Ben Bruno makes his case.
Powerlifting & Strength, Squat, Training
Ben Bruno September 19 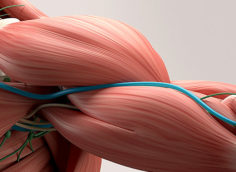 Try this pressing variation to mix things up. It's also great if your shoulders are feeling banged up.
Training
Sivan Fagan September 17