Fat loss science has undergone something of a renaissance the last decade. Thanks to the work of some forward-thinking people, the days of getting to the gym before breakfast for 60-minutes of soul-sucking, Testosterone-lowering cardio that defined fat loss training in the 80's and 90's are thankfully behind us.

The speedy brutality of high-intensity intervals has replaced the monotonous drudgery of steady-state cardio marathons, and optimistic but meaningless terms like "target heart-rate" and "fat burning zone" have been replaced with decidedly more substantive ones like "anaerobic threshold" and "Excess Post-exercise Oxygen Consumption (EPOC) rate."

But as much as I love this newer style of training, I realize that many who train in commercial gyms have a difficult time finding the open space or proper equipment to perform a lot of the routines that I take for granted.

The free weight areas in most gyms are disgracefully small and cramped, overstuffed with muscle-isolation machines and inflatable rubber balls. And even if you're lucky enough to work out in a decently equipped facility, good luck setting up a multi-station circuit among the hordes of Ed Hardy T-shirts and tribal-band tattoo types that typically clog the weight room floor every night at about 5 PM.

With those challenges in mind, I've put together three high-intensity routines that you can do with the standard cardio equipment you'll find at any commercial gym. Sure, they might not have quite the same "cool factor" as doing sandbag clean and jerks or timed circuits on the Battling Ropes, but they can be every bit as difficult and effective – and in some cases even more so.

Any treadmill that can provide at least a 10% graded incline.

Sprinting is one of the most basic, instinctive, and effective forms of high-intensity exercise. It challenges both the neuromuscular and cardiovascular system to generate and sustain running-specific speed and power.

Sprinting on an upward incline can also improve your running mechanics and help improve lower back and knee health. The sloped running surface forces us to lift our hip above 90-degrees, which we rarely do anymore in our daily lives or exercise programs, activating the deep muscular attachments of the psoas and illiacus.

Despite the long list of indictments that have been made against the enigmatic iliopsoas – lower back pain, hamstring tears, decreased squat depth – the fact remains that most people are incredibly weak there.

In my experience, most "hip flexor" problems are a result of a poorly timed hand-off between the muscles that bring your hip up to 90-degrees (TFL, rectus femoris, and sartorius) and those that carry it above 90-degrees (the iliopsoas). This timing issue results in a synergistic dominance of the first three and a relative inhibition of the last two.

Therefore, get thee to sprinting.

Start by standing with your feet on the outside edges of the treadmill (not on the belt). Set the machine for a 10% incline and a speed 1-3 mile per hour faster than what you normally jog.

For example, if you normally jog at 6 mph, start the program at 7–9 mph. Let the treadmill build up to your desired speed and incline (this should take 30–60 seconds, depending on the model).

Once the treadmill is humming at full-speed, jump on and sprint for 30 seconds. As soon as you finish, grab the sides and jump back onto the non-moving part of the deck, or off the machine completely. This can obviously be a little tricky, but nothing says intensity like a massive jolt to your fight-or-flight response. Rest for 30 seconds, repeating this cycle for ten reps.

With each rep, try to increase the speed of the belt until you're able to achieve 10 reps, at 10 miles per hour, at 10% incline, with 30-seconds rest between reps. Depending on your fitness level, it might take several weeks to work up to the full 10 reps at 10 mph.

Then, at your next workout, increase the speed by .2 mph (that's point two mph, not two) for each rep, trying to get up to full-speed early in the reps.

The other way to ramp up your endurance on this exercise is to just start at 10 mph/10% incline and do as many reps as you can with 30-seconds rest. Then try to add one additional rep every second or third workout until you're able to complete all 10.

A great twist on this challenge that uses the same time intervals – 30 seconds on, 30 seconds off – but works a completely different set of muscles is the 30-30-10 Treadmill "Push" Challenge.

In this variation, instead of sprinting on a moving belt, you push against a static belt when the treadmill is off. Since most big-box health clubs don't have sleds or the open floor space to push them around, this is a great way to get the same benefits.

Simply step onto the belt, place your hands on the front handles of the display, and start pushing as fast as you can for 30 seconds. Rest for 30 seconds, and repeat until you make it to 10 reps. 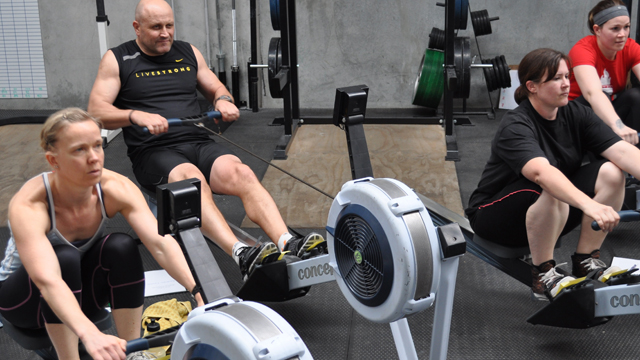 Vikings might be best known for looting, pillaging, and awesomely horned headpieces, but these guys also knew a thing or two about rowing.

Rowing is one of the best full-body exercises out there. Each stroke works the back, legs, shoulders, and arms concentrically to initiate the movement, while the hip flexors and abdominals work eccentrically to decelerate trunk extension at the end.

As a trainer, the rowing stroke is also a good diagnostic tool to assess relative flexibility between the low back and hip – known as lumbo-pelvic rhythm – during a controlled, unloaded pattern.

A client with excessive stiffness in the posterior hip will arrive into the bottom position with excessive lumbar flexion. If you see this pattern in your client's row, where the heels are able to lift off the platform, you're almost guaranteed to see it again at the bottom of their deadlift or squat, where their heels must stay flat.

This challenge involves four sets of rowing, with each set doubling the distance of the previous one. You should think of each set as a mini-race, requiring a maximal, all-out full-Viking effort to complete (oversized sword and savage regional conquests optional).

Rest periods between sets should be equal to the amount of time it took to complete the set. For example, if it takes you 1:53 seconds to complete 500M in Set 3, your rest period before Set 4 would be 1:53 seconds. As the sprints increase in duration, so do the rest periods.

If you really want to up the ante, you can try a variation of this challenge that I got from MMA-training expert Mike Campanella called the Viking Warrior Challenge. In this variation, everything is the same as the original, except now you must add a 30-second flurry of punches on a heavy bag at the end of each set.

Not only will this decrease your total rest and make your arms want to fall out of their attachments, but it also better mimics the energy-system requirements of brutal invasion and subsequent enslavement of the local population.

Along with Godzilla movies, sushi, and Hello Kitty merchandise, we have the good people of Japan to thank for the Tabata Protocol. Based on a landmark study conducted at the National Institute of Fitness and Sports in Tokyo, this protocol is a four-minute timed workout consisting of 20 seconds of very high-intensity exercise followed by 10 seconds of rest.

The original six-week study compared the effects of this method with those of a traditional 60-minute aerobic workout. The results surprised a lot of people.

The four-minute group performed the Tabata Protocol four days per week (16 total minutes), plus one additional 30-minute steady-state workout each week (total work was 95 minutes for the week, since each interval was preceded by a 10 minute warm-up). The aerobic group performed five 60-minute workouts (300 total minutes) per week.

Although the researchers didn't specifically measure changes in subcutaneous fat at the end of the study, given all that we know about EPOC and other high-intensity techniques, it's not a big jump to think that this particularly high-intensity protocol would carry similar benefits.

Set yourself up on a Schwinn Airdyne, indoor spinning cycle, or other stationary bike. I like the Airdyne because it brings the upper body into the exercise and gives you escalating resistance (i.e., the faster you peddle, the greater the resistance).

Set the monitor for 14 minutes – 10 minutes of steady-state, followed by 4 minutes of sprint intervals. Once you begin the intervals, make sure to peddle as fast as you possibly can for 20 seconds. The original study was conducted at 170% of VO2 Max, which suffice it to say, requires a substantial effort. Then rest for 10 seconds. Repeat for 8 rounds, totaling 4 minutes.

And another performance note, if four minutes of Tabatas isn't the hardest thing you've ever done, you're doing them wrong.

The Cardio Take Away

While few lifters actually like cardio, it's nice to know that the days of endless hours of fasted steady state work are mercifully behind us. With these three awesomely challenging workouts, you can burn fat and crank up your conditioning in a fraction of the time, and even feel a bit like an athlete, to boot.

Most of us toiling away at Planet Douchebag aren't there by choice, and who wouldn't rather toss sandbags or flip tires than spin the wheels on a stationary bike? But sometimes in life, and in training, you gotta make the best of the hand you're dealt.

Besides, there's something kind of hardcore about training at the commercial fitness factory. You think Vikings had to endure Ed Hardy and mid-set texting?

This might just be the easiest way to fix most ugly squat problems. And it only takes about 30 seconds. Check it out.
It Hurts Fix It, Tips, Training
Drew Murphy January 15

Boost your squat numbers by learning to impart maximal velocity to the bar. Here are two ways to do it.
Exercise Coaching, Powerlifting & Strength, Squat, Tips
Chad Wesley Smith November 2

Squats aren't for everyone, at least not right away. Here's how to systematically work your way up to squatting like a champion.
Most Popular Squat Articles, Squat, Training
Martin Rooney August 19
Today, Dave discusses something called "the breakthrough factor," how he'd approach bodybuilding today, and a very intriguing training idea: the private warehouse gym. Let's get to it!
Training
Chris Shugart January 12