"Every day, I hear someone say, 'I'm too fat. I need to lose 25 pounds, but I can't. I never seem to improve.' I'd hate myself if I had that kind of attitude, if I were that weak. I can lose 10-40 pounds rapidly, easily, painlessly, by simply setting my mind to it. By observing the principles of strict discipline that bodybuilding taught me, I can prepare myself for anything." – Arnold Schwarzenegger, The Education of a Bodybuilder

The wisdom of the Oak. With all of the bodybuilding information available today, many of us still turn to Arnold when we need fresh training ideas or motivation. In comparison, most contemporary sources of bodybuilding information seem withdrawn, lifeless, and soft when compared to Arnold's early writings. It's as if the books and magazines are more concerned with coddling us and keeping us from getting boo-boos in the gym than helping us build slabs of raw muscle.

Of course, we modern bodybuilders and athletes are a very jaded bunch. Do we blindly follow the arm routine of some Mr. Olympia competitor? Probably not. We know that those articles are usually ghostwritten, and we wonder if that champion's big bis are real or if they're simply stuffed with some injectable oil. We've accepted steroids – hey, we kinda' like 'em – but Synthol and its cousins? Puhlease. So we dig out those boxes in the closet and find the books and magazines that inspired us to train in the first place. My box is full of Arnold's books and near-antique training courses. While I usually follow one of Poliquin's or Telle's programs, every once and a while I need the Oak at my side in the gym.

With this in mind, I wrote Resurrecting the Oak, Part 1 back in Issue 59 of Testosterone. The response was tremendous. Apparently, Testosterone readers also enjoy an occasional kick in the ass when it comes to training intensity, even if it doesn't jive with most modern theories. As unscientific as Arnold's methods seem today, we can't deny that they worked. The lesson? Knowledge doesn't always replace desire, hunger, and fire.

In Part II, we'll look at a few more of the training principles that changed a boy named Arnold into the Oak, and the Oak into an icon.

"This was the first time I knew pain could become pleasure. We were benefiting from the pain, breaking the pain barrier. We looked at this pain as a positive thing, because we grew. It was a fantastic feeling to gain size from pain. The whole idea of pain became a pleasure trip."

Arnold is talking about the results of his weekend training sessions in the countryside near Munich. He and a few training partners would load up a car with weights and drive out to the woods to train. They limited themselves to one exercise, like squats, and did them all day. Arnold once squatted for three hours, performing 55 sets.

Soon, he made the trips to the country a regular thing. He started bringing girls out to cook for him. They would train in the open air, swim naked in the lakes, have sex, and then train some more (sort of makes you wonder what the hell you've been doing with your life, doesn't it?).

The next week, they would bench all day or do rows. The idea was to surprise the body and shock it into growth. In Arnold's mind, if ten sets of bench presses were good, then twenty would be even better. (Pssst! Hey, you! Yeah, you sitting there at your computer with that copy of "Heavy Duty II" on your shelf. Don't even say it! Is this training scientific? No. Logical? Not a bit. Would Ayn Rand approve? Probably not! Did it help build the most admirable physique in the history of bodybuilding? Yep.)

"We slept in trenches under the tanks until we were awakened each morning at six. But I had another idea – my buddy and I would get up at five, open the tool compartment of the tanks where we stored our barbells, and exercise for an hour before everyone else woke up. After we finished maneuvers for the day, we would train for another hour. Finding the time for your workouts is simply a matter of motivation plus imagination."

So much for the tired excuse of "not having time to train!" Arnold came up with the idea of double-split training while serving in the Austrian army, and he later credited this system for much of his success. Today's experts are almost unanimous in their opinion that you should only train for an hour or less a day. At his peak, the Oak trained three hours a day, twice a day! Sure, his genetics were godlike, and the steroids helped, too, but maybe – just maybe – it was his hunger to grow that really set him apart.

Poliquin has used a double-split program before for his athletes, with the following modifications:

Arnold might scoff at short 40-minute workouts, but Poliquin's split may work better for those of us with mere mortal genetics and, you know, jobs and stuff!

Arnold's Ideas on Reps and Sets

"I lived by the training program. I was always master of writing out the programs. I knew that as soon as I put it down, the last thing I wanted to do was disappoint myself. I knew that I had to look in the mirror every day, and I could not look in the mirror and say, 'You know something? You're a fucking loser. You cannot do the kind of sets and exercises that you write down.' I didn't want to face that."

Although Arnold changed his program regularly, his basic set and rep patterns consisted of five sets of almost every exercise. The sets would break down into reps of 15, 10, 8, 6, and 6. In other words, the first set would serve as a warm-up, then he would usually add weight each successive set and lower the reps.

Schwarzenegger believed that five sets were necessary to stimulate all of the available muscle fibers. However, he used three sets on what he called "power training" – a heavy, powerlifting style of lifting. For abs, he used sets of 100, but before competitions, he would perform marathon sessions of Roman chair sit-ups and giant sets of ten different exercises equaling over 500 reps without resting – now, is that a deka-set or a deca-set?

As mentioned in Part I, Arnold thought that ab work would remove fat from the stomach, i.e. spot reducing. We know that it was probably his diet and the aerobic effect of his training which caused him to drop fat.

The big guy also had a great way to record his sets. Since he often used five sets, he would make marks on the wall or in his training journal. After each completed set, he would turn each slash into an X.

Arnold said that seeing the sets get slashed out gave him tremendous motivation and satisfaction. It also forced him to stick with his training goals and stay with the plan.

Arnold started his bodybuilding career with weak calves. For a while, he ignored it – even having his photograph taken while standing knee-deep in water. Soon, he acknowledged this shortcoming in his usual "balls to the wall" manner: he cut off the bottoms of his sweat pants so that everyone could see his weakness. Then, he forced himself to focus on bringing up this lagging bodypart.

To do this, he first incorporated the "priority" principle, which states that you should train weak areas first in your workout (Ian King goes even further and suggests working weak areas at the beginning of the week, too). Arnold also used staggered sets. Basically, he would perform one set of calf raises in between every exercise he did that day. That way, he would do around ten sets of calf work and "have only five more sets to go" at the end of the workout. Note to Poliquin: Are you sure it's German Volume Training and not Austrian Volume Training?

Instead of doing five sets of one particular exercise for a body part, do one set of just about every exercise you know for that bodypart. Don't worry, this isn't a giant set or a tri-set; you'll rest in between exercises. For example, do one set of standing barbell curls, then incline curls, dumbbell curls, preacher curls, cable curls and, finally, concentration curls.

The idea is to use slightly different angles to hit every possible muscle fiber in the biceps. You can also use multi-exercise sets to prevent stagnation and boredom. Arnold said that this type of intense training isn't masochistic; it's simply a means to an end. My advice is to try it dressed in latex and wearing a dog collar if you've been a very, very naughty boy!

"Normal people can be happy with a regular life. I was different. I felt that there was more to life than just plodding through an average existence.... I had it tougher than a lot of my companions because I wanted more, I demanded more. I was hungrier for success than anyone I knew."

A few years back, there was a best-selling book titled "Listening to Prozac." Well, fuck Prozac – listen to Arnold! But, hey, listen to Poliquin, King, and Telle, too. You can learn something from everyone. A good bodybuilder must keep up with current exercise science, and he must look to its future, as well. But a great bodybuilder also never forgets the past.

Do this for only one set at the very end of your triceps workout. First iso-hold 20 seconds, second 15 seconds, last hold for 10 seconds.
Arms, Exercise Coaching, Tips
Christian Thibaudeau March 14

Even if you deadlift and squat, you may still be missing something in your quest for the ultimate athletic booty.
Bodybuilding, Glutes, Training
Nick Tumminello March 10 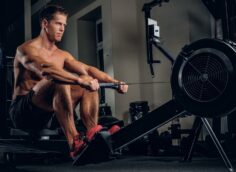