Break Out of the Rep Range Rut!

In the old days (read: five years ago) lifting weights was simple. The "rules" went something like this:

Yep, resistance training was much less complicated when we were kinda ignorant, wasn't it? Today we know that the "rules" above are largely hogwash. For one thing, they were created with the assumption that you're always supposed to do three sets of every exercise. Where did that come from anyway? And why does everyone who picks up a weight automatically use the 3 x 10 protocol?

As is usually the case, things get more complicated the more educated you become. These days we don't blindly accept the old school rules because we know how things like tempo, sets and rest periods can affect the training stimulus. We also know about muscle fiber types, adaptation principles and genetic variations

We know that while 3 x 10 will work fine for a newbie (because, hell, anything is more hypertrophic than sitting on your keester eating Cheez Whiz straight from the can), the experienced trainer needs to explore other rep and set options for continued progress.

Or do we know that? We don't know about you, but when we train in a commercial gym we see most people doing the tired old dance of 3 x 10, blissfully unaware of all the other rep/set options available to them. Maybe it's time to review some of these other, perhaps more effective methods.

If you've been stuck in a rep range rut, this article will break you out of it!

Low reps using heavy weights will build strength for sure, but can it build muscle? Of course it can! The secret is to perform multiple sets.

Chad Waterbury convinced most of us of this after we tried his programs using an 8 x 3 scheme. A quick summary:

Multiple sets of heavy load training targets the Type IIB fibers that have the greatest potential for growth. Performing three sets of three reps won't do much for growth, but eight sets of three will be nitroglycerine to your muscles!

Rearranging sets and reps is pretty straightforward stuff, but Christian Thibaudeau goes one step further by recommending rep alterations within the same set. This is called tempo contrast and yes, it hurts real bad.

To use the tempo contrast method, alternate between slow and fast tempos during a set. For example, perform eight reps of reverse curls like this:

Three to four sets are performed for each exercise when using this method. When performed properly, tempo contrast stimulates motor units like a Lindsay Lohan nipple shot stimulates, well, pervs like us.

Popularized by Ian "The Real Crocodile Hunter" King, this method involves extending a rep. To perform a 1 1/2 front squat, do a full squat, then come up halfway. Drop down again, pause, then come all the way up. That's one rep.

The half-rep can be placed at the "bottom" or the "top" of the movement, your choice. Try both methods. For instance, when using this method with curls, you can perform the half rep from full extension to where your forearms are parallel with the ground, or you can do it from parallel to the top of the movement.

This method lengthens the TUT (time under tension) and gives lifters added work in a specific range of motion. Another reason to use 1 1/2's is to work around an injury. Many lifters can't do heavy squats for a variety of reasons. However, if they were to do 1 1/2's, they could use less weight and still create a great deal of tension in their muscle fibers.

Warning: If you use this method with leg work, keep a bucket handy!

This is another simple, yet painful method popularized by Christian "The Beast" Thibaudeau. You're going to hold an isometric pause at the mid-range point of the movement on each rep. The length of the pause will vary from rep to rep to accommodate the growing level of fatigue:

Thibaudeau likes this method because you can recruit up to 10% more motor units during an isometric action than during a dynamic action. He also likes to watch his clients pass out and choke on their own vomit. Coincidence? We think not.

Seriously, this method is especially effective for isolation exercises. Three to four sets should do the trick.

The five sets of five reps method was originally developed by Reg Park. There are two accepted ways of using the 5 x 5 scheme.

In the first, 5 x 5 is your goal, but you won't get those rep number every set, at least not right away. Typically, if you've chosen the correct weight, the workout would look like this:

So with this 5 x 5 variation, you start out using a heavy weight and lower the reps as needed throughout the five sets. Always keep the same weight on the bar, however.

In the second 5 x 5 variation, you get all five reps every set. You do this by either:

If you've never used 5 x 5, start with the classic approach we outlined.

This method simply involves doing a set of an exercise with your 5RM (rep max). After waiting three to five minutes, you add 2-3% additional resistance and do a set of four. Then, continuing in this fashion and adding an additional 2-3% each time, you work down to your 1RM.

Proponents of this system like it because it teaches your body to do a "true" one-rep maximum. They maintain that you can't go from doing sets of eight to a true 1RM unless you teach your nervous system how to recruit the higher-threshold muscle fibers.

Once you can complete the prescribed sets and reps, you add resistance to your starting weight and recalculate the pyramid.

Cluster sets are utilized by many strength coaches including Don Alessi, Charles Poliquin and Christian Thibaudeau. Basically, a cluster set is just a fancy name for the old rest-pause method many of us first tried after reading about Arnold doing it.

To perform a cluster set, load up the bar with a really heavy weight, anywhere from 80 to 95% of your 1RM. Perform one rep, then set the bar down and rest. Then pick it up and perform another rep. Continue until you reach your desired number of reps within the extended set (usually 5-10 reps). How long do you rest? Not long at all! Try 10-30 seconds.

These short breaks allow for a slight ATP-CP regeneration and CNS relief that enable you to perform a bit more work with the same training load. Clustering is a great method for building up functional hypertrophy and strength. Try it!

These are fun. Fun like getting a root canal.

To perform extended 5's, pick an exercise and load up the bar or machine with as much weight as you can lift for five reps. Perform the five reps, rest for 15 seconds, then perform as many reps as possible with the same load. Now, rest again for 15 seconds and perform another set to failure.

Try four sets of five reps (plus the two extended sets) with triceps extensions and you'll soon be splitting your shirtsleeves!

This is an Ian King favorite which can be added to any type of heavy, low rep training. Let's say you're performing five sets of doubles (5 x 2) on the bench press. After your last set, strip off most of the weight and knock out an additional set of 12 to 20 reps.

This is great for those lifters who like to feel the "pump" and miss it when training with very low reps and sets. The rush of blood to the trained muscles may also help facilitate recovery.

This is another old favorite you can throw into your training for the shock value. Trust us, this one will knock you out of the worst training stupor!

To perform the 100 rep set, pick any compound movement, pull-ups for example. Now perform as many pull-ups as you can. Let say you get 12. Fine, you have 88 more to go. It doesn't matter how many "sets" it takes, your goal is to get 100 pull-ups – even if you're only cranking out a couple at a time as your approach the century mark.

Want a real challenge? Pair the pull-ups with a chest exercise such as push-ups or dips and superset them with the back work. These two exercises will make up your entire workout for that day: two exercises, 200 reps! We get sore just thinking about it.

We've only touched on a handful of possible rep and set variations here. There are hundreds of options out there, so there's no excuse for you being a 3 x 10 gym dork. Join the new school and make some new gains! 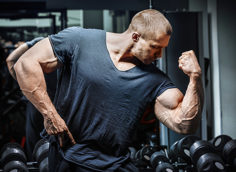 Taking time off from the gym isn't a setback... as long as you come back with the right plan. Here it is.
Training, Workouts
Gareth Sapstead June 30

There’s no single best training tool. Instead of searching for one, increase the size of your toolbox. Here’s how to make your workouts practical and effective.
Bodybuilding, Training
Alwyn Cosgrove September 26 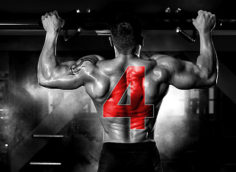 Should you be using the one-and-a-half method in your training? If you're after size and strength, then yes! Check this out.
Training
Gareth Sapstead October 16