In your never-ending quest for size, strength, and overall athletic dominance, you'll eventually run into a plateau. And it will test you. You'll de-load, change your movements, and try different programs. In the end you'll lose countless hours of sleep thinking about it and probably try some really harebrained fixes.

Forget that scenario. Let's identify the issue and fix it. For most, breakdown occurs when we can no longer apply all the force we can generate to the bar. There's a leak in the energy chain, which usually shows up at the core (trunk and hips), so that's where we need to focus our efforts. An efficient way to place a higher demand on core function is through offset loading.

When you miss a rep or find yourself not being able to push more weight, energy is not only lost anteriorly and posteriorly, but also laterally and rotationally. Your trunk rotates and your knees buckle, causing energy to be lost and force to be dissipated before it can reach the bar.

These lateral and rotational breakdowns aren't fully addressed through typical loading, but using offset loads can help by developing greater core stability and strength, which provides a base for more force transfer, more strength, and ultimately what we're all chasing – bigger numbers with our main lifts.

The greater offset will demand more core stability and strength to maintain a neutral spine while still using the same overall load. Being able to use the same load with a higher demand on core function is another benefit of offset loads, and another reason offset loading will help you break through strength plateaus.

You should still have the main lifts as your base when implementing offset loads into your program. You can decrease the intensity of the main lifts slightly and move the weight quicker (less weight, more speed), or at least not try to push a new PR right away as you introduce the offset loads.

The exercises in which you use the offset loads should be the second or third exercises in your program (i.e., your B1, B2, C1, or C2 exercises). They're not meant to replace the main lifts but supplement them, and are best performed with reps in the 6-12 range.

Here's a sample two-day full body program that takes advantage of offset loading and will help you break through strength plateaus. Rest as long as needed between paired exercises. When using the offset loads, make sure to focus on keeping the spine and hips neutral and your core stable. Don't allow yourself to be pulled or rotated towards the heavier load, and don't over compensate by leaning away from the heavier load.

The next time you find yourself stuck in a strength plateau, try offset loading. It's not meant to replace going after the main lifts, but taking advantage of the higher demand on core stability and strength offered through offset loading will help fix energy leaks and prepare your body to reach new PRs.

Metcon isn't just about fat loss. Without it, muscle growth and strength gains can grind to a halt. Really. Here's why and what to do about it.
Bodybuilding, Metabolic Conditioning, Metcon, Training
Paul Carter March 29 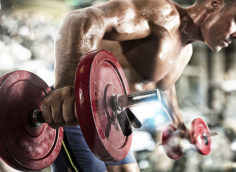 Answer these questions to create the best training plan for YOU.
Training
Nick Tumminello October 22

Nail your lagging triceps with this unique exercise. Here's exactly how to do it.
Arms, Bodybuilding, Tips, Training
Paul Carter June 28