What's the best way to preserve muscle while losing fat? How do you smash an overhead press plateau? Answers here.

Question: What's the best routine for muscle preservation while dieting? Should you try to maintain strength and keep volume low, or focus on hypertrophy to pump the individual muscles?

First of all, losing muscle while dieting won't be a real risk as long as you don't get below a "real" 9 percent body fat or so.

I say "real" because most people who think they're 9-10 percent are more like 13 or higher. Look at this photo of me:

Pretty lean, right? What do you think my body fat was there? 6 percent? 5 percent? Try 9.2 percent!

The point is, if you keep training hard and consume enough protein, there's no reason for you to worry about muscle loss until you get THAT lean or close to it.

And because of the loss of water, your strength can actually decrease too, especially on big compound movements (mostly pressing exercises). So it's easy to interpret that as muscle loss. But in most cases, it isn't.

The only reason you may lose muscle while training hard is the overproduction of cortisol. Cortisol is known as a "stress hormone" because it's released during periods of stress. Training is a stress. So is being underfed.

Two key roles of cortisol are:

Chronic and excessive cortisol elevation is the main reason for losing muscle because it directly causes a breakdown of muscle tissue. It also slows down muscle repair/rebuilding by inhibiting the immune system (which is the driver of muscle growth) and limits how much muscle you can carry by increasing myostatin, a protein that acts as the governor for how much muscle your body allows you to carry (more myostatin means less muscle).

Cortisol's function during the training session is to mobilize energy so that the muscles have enough fuel. So the more volume you do in your workout, the more cortisol you produce. That's why if you're a natural lifter, increasing training volume while trying to get lean (and reducing calories) is one of the things that can lead to muscle loss.

"Yeah, but bodybuilding gurus recommend doing a metric ton of volume to shred the fat."

Well, yeah, if you're on anabolics, it'll work because steroids will protect you against the muscle-wasting effect of cortisol. But if you're natural, trying to use the workout to burn more calories is one of the best ways to lose muscle!

Now, I'm not against higher rep ranges for losing fat. Sets that last 40-70 seconds can be effective at preserving muscle mass while dieting. These lighter sets won't cause as much muscle damage and are easier to recover from.

That's also the set duration where you have the greatest release of lactic acid, which is, in itself, anabolic – it can help preserve muscle mass. So the inclusion of some lactic work along with some heavier work is the best combination to maintain muscle because both provide different growth stimuli which will make it easier to maintain or even gain muscle.

The key is to keep overall volume low and overall frequency high:

I recommend The Best Damn Workout Plan for Natural lifters because it's designed to prevent the potential cortisol backlash and will allow the natural lifter to easily maintain or even increase muscle mass while dieting down.

Question: What's the most common reason for a standing barbell press plateau, and how can you break through it?

The most obvious reason is that it's undertrained compared to the bench press and other related pressing exercises.

Someone who's considered a strong overhead presser is said to be able to lift at least his body weight in the military press. But few people can do that because this old standard was established when the military press – not the bench press – was the main upper body lift.

And what did people do when the military press was the main upper body lift? They did what most guys now do with the bench press: they trained it more often and harder than other lifts.

Most people aren't comfortable, nor technically efficient, pressing weights over their heads while standing up. As a result, they're not good at displaying their full strength on that lift.

If you really want this lift to take off, train it three times a week. One of the workouts should be strictly for the overhead press and it would include training the overhead press heavy and doing your assistance work for that lift. The two other sessions should be technique work on the press (and then doing your regular workout). It's also important that you reduce bench press work while you're trying to jack up your overhead press.

Do your regular workout after that.

B. Assistance Exercise for the Overhead Press

Here you'll select one basic exercise to strengthen the weak point in your overhead press. Use this table to help you select the right exercise:

Change the assistance exercise every 4 weeks. Train it in the 4-6 rep range. Yes, try to increase the weight, but not if form is sacrificed.

Here you would do a vertical pulling movement trained for sets of 6-8 reps focusing on full range, control, and mind-muscle connection. Do 3-5 sets.

Do your regular workout after that.

Want to See Your Question Here? 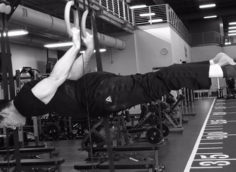 The full-body tension and bracing you'll get from this exercise will improve just about every lift you do. Here's how to master it.
Training
TJ Kuster December 2

Back in December, Coach Thibaudeau introduced T-Nation to Pendulum Training, his particular style of non-linear periodization, then he applied this effective approach to bodybuilding. Now, the big bald Canadian is tackling powerlifting. This should be interesting!
Powerlifting & Strength, Training
Christian Thibaudeau February 13

You only need two or three exercises to build your abs. The trick is to choose the right exercises and breathe correctly while doing them. Here's how.
Abs, Training
John Meadows May 26