Q: I've often heard that athletes should perform their lifts standing up when appropriate. For example, they should always stand when performing overhead presses for shoulders. One trainer even said:

You fight on your feet and you play sports on your feet, so why would you train sitting down?

Most guys I know sit down and use some type of back support for shoulder work. Is this wrong? What if I feel discomfort in the lower back while standings and lifting?

A: The problem with sit-down work is that you're inviting trouble by eliminating structural work for the lower back. To paraphrase Fred Hatfield, sitting down effectively limits the support and stabilizer requirements of the muscles. In essence, this damages their abilities to work synergistically and stabilize the body. Compared to machines, Hatfield says, standing work helps you build a more injury-proof body. He also notes that standing Olympic lifts teach athletes how to explode, accelerate objects under varying degrees of resistance, and apply force in the proper sequence. In other words, if you're a competitive athlete, you'd better be standing up while lifting where appropriate!

I'd also concur with my colleague Charles Staley that bodybuilders could further their gains by doing some standing platform work. Most bodybuilders would gain some appreciable muscle mass in the posterior chain and traps with some of the Olympic lift variations.

If you do experience lower-back pain while standing, I recommend you communicate with a competent health professional to help you deal with the problem causing that lower back discomfort.

There're also plenty of exercise alternatives for someone with lower back pain. For example, the Safety Squat Bar is a viable alternative for someone who experiences lower back pain while doing regular bar squats. This specially designed bar with a padded yoke makes it easier to get deep enough into the squat position and easier to keep your back upright while minimizing the stress on the knees and lower back. The design of the bar provides a lower center of mass for the resistance on the bar, thereby creating less torque on the lower back vertebrae. To purchase a Safety Squat Bar contact Jesse Hoagland 609-989-0211.

Another alternative for leg development is the Gerard Trap Bar. It was invented by Al Gerard, a powerlifter from North Carolina, who suffered from chronic back problems. To alleviate pain and lost training days, he invented and patented this special diamond-shaped bar which allows you to stand inside of it. This improves balance and eliminates interference with the legs. In other words, no more bloody shins. It also permits you to maintain a more upright posture; thus, there's less shearing force exerted on the spine. To get a Gerard Trap Bar, go to trapbar.com.

Q: Do you think acupuncture has any applications for the training of athletes? How does acupuncture actually work anyway?

A: Yes, acupuncture can definitely be helpful to athletes. I know many world class and professional athletes who've used acupuncture as an adjunct to their training. Over the years, I've seen Olympic medallists in weightlifting, track and field, alpine skiing, and ski jumping use acupuncture to achieve a competitive edge, one that can't be detected by standard means of doping control.

Acupuncture has been used both as a performance enhancer and in the treatment of injuries. Normally, acupuncture is used in conjunction with other therapies such as chiropractic, soft tissue manipulation, herbology and so on. I know of athletes who've used it successfully in dealing with all of the following:

As far as performance is concerned, athletes have been known to use acupuncture to help them get into "the zone." If they're too nervous, certain points are used to calm them and get them ready to perform. If an athlete is lethargic on competition day, acupuncture can be used to activate the nervous system and get him or her into the optimal zone for performance. In fact, at this very moment I have my personal acupuncturist, Wong-Lee, poking me in the ass repeatedly to keep me in my "meet-the-deadline" zone.

Acupuncture actually works at encouraging the body to promote its natural healing processes. This is done by inserting needles and applying heat (called moxibustion) or electrical stimulation at very precisely selected acupuncture points. There're two ways I can explain how it works. First, the classical Chinese explanation:

Channels of energy, also known as meridians, run in regular patterns through the body and over its surface. These channels can be likened to rivers flowing through the body to irrigate and feed the tissues. Any obstruction in the movement of these "energy rivers" can be compared to a dam that backs up the flow in one part of the body and restricts it in others. According to acupuncture dogma, any blockages or deficiencies of energy, blood and neural pulses would eventually contribute to illness. The Chinese also say that acupuncture balances out the Yin (negative) forces with the Yang (positive) forces. What the needles are basically doing is clearing or removing the dams that block the flow of energy.

Now the Western explanation: Needling the acupuncture points stimulates the nervous system to release chemicals in the muscles and at various points in the central nervous system. These chemicals, such as serotonin and endorphins, either change the pain threshold or trigger the release of other chemicals that precipitate healing. Instead of using the Yin and Yang construct, Westerners say that acupuncture balances out the electric charges at the electron level in the actual cells.

Regardless of the language, acupuncture can be a helpful tool for the athlete.

Q: Outside of milk thistle, do you know of any other herbs that athletes favor for liver regeneration?

A: Yes, one that's gaining popularity in athletic circles is Picrorhiza kurroa. It's a small perennial herb that grows in the northwestern part of India, usually on the slopes of the Himalayas between 3000 and 5000 meters. It's an important herb in the traditional Ayurvedic system of medicine and has been used to treat liver troubles and bronchial problems. It's the roots and rhizomes (subterranean stems) of the plant that are used medicinally.

The herb has shown in experimental settings to protect the liver from a variety of stressors, everything from toxic mushrooms to Tylenol. It appears to be at least equal, and in many cases superior, to milk thistle. Besides having strong antioxidant properties, its liver regenerating effects have been strongly demonstrated.

Picrorhiza kurroacomes in two forms: tincture and capsules of standardized extract, 4% kuktin. (If you're a real man, however, you'll travel to the Himalayas and pick the herb yourself, as I used to do thrice yearly. Unfortunately, I was mistaken for a Yeti and shot in the chest, the bullet just grazing my heart. Perhaps you've heard of my past heart surgery? Well, now you know the whole story.)

The normal dose prescribed sits between 400 to 1500 mg. Many athletes report increased energy levels and gains in lean body mass after five days of use. This is probably due improved IGF-1 levels.

Q: I'm a pro-volleyball player in Italy during the winter months and very much enjoy your articles. I've had multiple ankle injuries due to my sport. I love to squat, but can't seem to be able to get in the proper position that you describe in your articles. Any suggestions?

A: First, you may want to address correcting the soft tissue adhesions that restrict your ankle motion. I personally saw Rich Pilon when he was with the New York Islanders get instant and permanent flexibility gains on the ankle retinaculum after being treated by Dr. Mike Leahy with Active Release Technique. The team trainer's eyes practically came out of their sockets when he saw Dr. Leahy solve the problem easily in less than a minute. The befuddled trainer muttered in disbelief, "I've been treating him on that for the last four months!" To contact an ART provider in your area, call 1-719-473-7000.

Until you get the soft-tissue released, you can still squat using a Super-Squat Harness. This device is particularly appropriate for athletes with long femurs and tight ankles like your typical volleyball or basketball player. To purchase a Super Squat Harness click here. The harness is very affordable and can be carried in your gym bag. 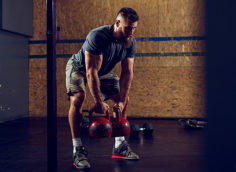 Kettlebells don't get enough credit when it comes to hypertrophy. Let's change that. Here are the best muscle-building exercises.
Training
Jason Brown May 13

You can have hinkey knees and still train hard. You just have to make a few adjustments to keep them happy. Here's how.
Bodybuilding, It Hurts Fix It, Powerlifting & Strength, Training
Lee Boyce March 7

Back in the day, guys were big, strong, lean, athletic, and even healthy. Here are 6 seemingly forgotten ideas or methods that you'd do well to emulate today.
Bodybuilding, Training
Bradley Joe Kelly March 15

This bent-knee variation works best for most people because it keeps the hip flexors from taking over.
Abs, Exercise Coaching, Tips
Pieter van der Linde December 22