Q: There's an epidemic at my gym. Everyone and their mother seems to be doing all of their exercises on a Swiss ball. I know that you use them occasionally, but what do you think of people who do the bulk of their routines on a Swiss ball?

A: Well, it's a matter of what goal one wishes to achieve. Personally, I like to use Swiss balls:

Sit with your back and triceps resting against the side of a 65-cm Swiss ball. Reach down and grab your working set of dumbbells.

As useful as the Swiss ball is, there's a problem with relying on them too heavily. People who use them exclusively – I repeat, exclusively – have the following in common:

Another problem that recently came to my attention involved a businessman who suffered from shoulder pain. His personal trainer, however, had had him perform countless exercise sessions on the Swiss ball. It was a classic case of overuse, as the man could incline dumbbell press more on a Swiss ball than on an incline bench. How could that be? Well, when he did them on the ball, he was inadvertently shifting his hips and knees slightly through the range of motion, thus allowing him to find a safe groove, i.e. a path of movement that didn't hurt.

The Swiss ball is a great tool, but it's not the only tool. You can't, after all, build a house with only a hammer.

Q: Chuck, I read your article on Achieving Structural Balance with great interest – mouth agape, drool, the whole bit. Along the same lines, what percentage of work should people do for their body parts? For instance, should 50% of leg work be devoted to quads and 50% for hams, or do they require different amounts of work? Similarly, should biceps and triceps get equal work? How about back and chest?

A: The percentage of amount of work should be dictated by either:

For example, if you want to make the finals of the 500-meter kayak race at the Sydney Olympics, you probably want to cut back on squats and deadlifts. Conversely, if competing in the high jump is your goal, a twenty-inch arm is rather useless.

For example, bench press is probably the exercise that gets the most attention in the gym. Therefore, most people could further extend their training careers and performance by cutting back on pressing work and doing more work for the rhomboids and external rotators. A basic training concept is that the height of the competitive peak is a function of the width of the general preparation base. In other words, the more well-rounded your program, the more strength performance you can achieve in the long run.

Q: I understand that the hams should be about 2/3 as strong as the quads. Is there any way to test this? I thought of seeing what I could do on a leg extension and then comparing it to what I can do on a leg curl, but is that legit? I mean, don't the machines have to be made with the same strength/force curves?

A: First of all, the concept that the hams should as 2/3 as strong as the quads is antiquated. It's based on rather inadequate testing devices, and that figure was suggested when ergometers were about sophisticated as a circa 1950 computer. To get the true torque measurement of the hamstrings, you must be able to test it at very high speeds. Based on data that I have from various Canadian National teams, I theorize that the minimum ham/quad ratio should be at least 80%, and the optimal ratio will vary depending on the sport. For example, alpine skiers have lower rates of injuries when the ratio is near 80%, while bobsledders should target 125% ratios (meaning that the hams are actually stronger than the quads).

Interestingly enough, the ham/quad target can easily be reached by implementing "leave a stain on the carpet" full squats in the training process. In my first year with the Canadian National Ski Team, I got them to drop their half squats and substitute full squats, and their ratio went from 57% to 79% in eleven weeks.

Regarding the idea of testing strength ratios with the usual weight room machines, it's nearly impossible to do as there are so many different models of resistance training machines out there. If you're really concerned about the ratio, you can get it assessed in the biomechanics or physical therapy department of a major university. Ask for a ham/quad on the Kincom, Cybex, or David ergometers, which are far superior to what was available just a few years ago.

Q: My shoulders hurt all of the time when I work them directly. I've thought about not working them at all and instead concentrating on all of the other body parts. What do you think – will they shrink away?

You may, however, want to train using some shoulder abduction work (i.e. cable lateral raises) once every ten days or so.

Q: I never see you really advocate any time off, or even lessening the workout level of effort. In other words, it's always balls to the wall. Should I ever take a week off, or should I just spend a week where I only use, say, a 50% level of effort?

A: I think that holidays such as Thanksgiving and Christmas often take care of the time off. You can plan on having five days off during those time periods so that you can enjoy your holiday and, at the same time, regenerate the entire neuro-muscular and neuro-endocrine systems.

However, the longest amount of time I'd recommend that you take off is five days. If you can't regenerate fully in five days, then you really have some issues.

I also don't believe in performing 50% level of effort weeks, but I do believe that you should reduce your total number of sets by 40% once every three weeks. It's very hard to overtrain by employing only high intensity – your body just won't be able to lift the weight. You're far more likely to overtrain by volume. In other words, if you do ten sets per body part for the first four workouts, cut down to six per body part for the fifth and sixth workouts. Then change the program. Studies actually back up this concept of periodic volume reduction. The exact physiological reason isn't yet clear but, evidently, it does work.

Q: I know that you and Brooks Kubik are big on thick handle work to give muscles a different and presumably growth-stimulating stimulus. But the dumbbells at my gym are the regular kind. Any gizmo you know of that I could use to fatten the grip?

A: As a matter of fact, there is – it's called an EZ-grip. The prototypes were first shown to me a few years ago by one of my seminar attendants in Philly. You buy them in pairs. There's one for the left hand and one for the right. They fit right over the regular types of dumbbell and barbells.

They're also recommended for people with carpal tunnel syndrome-type symptoms. Incidentally, they also cut down on the exposure to germs. 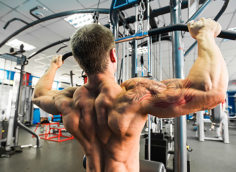 You do these staple exercises, but are you getting the most out of them? Here's how to do them right for a wider back.
Training
Michael Shaughnessy December 8