Q: I just recently completed your Maximal Weights workout and am very satisfied with the overall results. Thanks! My problem now, though, is that my chest won't grow.

So, how can I get my chest out of slow gear? I'm especially interested in building the lower part so it gets big enough to provide shade for small children and women. I've tried everything over the past eight months and have received very minimal results from my efforts. I'm a very motivated and determined person, so hit me with whatever you've got.

A: Glad you enjoyed the Maximal Weights program. It would have been interesting, though, to know how much strength you've gained.

Anyhow, by your letter, it sounds like you're interested in developing the sternal portion of the pectoralis major. A good routine for building thicker sternal pectoralis muscles would be:

Try this routine for six workouts and keep me posted. Expect to have a hard time slicking back your hair for the three days following that workout.

Keep in mind, though, that if you're going to undertake any serious chest training program, you need to supplement this workout with external rotator cuff exercises as outlined in my book. Otherwise, you're likely to get injured and acquire the posture of a Cro Magnon that just got kicked in the family jewels.

Q: I really enjoy your articles and trust your expertise. I've been lifting for one-and-a-half years and have made great progress in strength and size for my entire body. I am bigger than most of my friends and can lift more on traditional lifting exercises, but they can still beat me in arm wrestling.

For some reason, I just have never had much ability to arm wrestle well. I was wondering if you know anything about the muscles involved? And could you give me some suggestions on exercises I could do to increase my strength in the muscles involved and improve my arm wrestling ability? Thank you very much.

A: What very few people know is that arm wrestling is 60% technique, 20% strength, and 20% strategy. I suggest you consult one of the many books on arm wrestling technique to improve your odds.

Breaking the opponent's wrist hold at the beginning of the movement is the secret to arm wrestling performance. That is a function of timing and the strength of the flexor carpi ulnaris muscle, which can be trained by using ulnar deviation exercises.

Of course, supplemental specific strength work may help you improve your performance. The muscles that will most increase your chances of winning are the forearm flexors, brachioradialis, brachialis, pectoralis major, lats and teres major, and subscapularis.

To describe how to do all the exercises involved goes way beyond the scope of this Q and A. To find out how to specifically isolate these muscles, consult Everett Aaberg's book "Resistance Training Instruction" to be released early next March.

Q: In the Feedback Letters in Testosterone Issue No. 36, someone mentioned that you have a gym in Calgary. Is this true? If so, where, and what's it called? I live in Calgary, and I've never heard of this. Please respond! It will only take a second, and I really want to know.

A: The gym was located on acreage on the outskirts of Calgary and open only to my clients for both their privacy and mine. It didn't have a name, and you would have to know where it was.

Since most of my clients are NHL players, I had to be able to train them without having a hockey fan interrupting them in the middle of a set of power cleans to ask a question like, "Hey, do you think they'll trade Fleury to the Sharks?" or "Dude, you must have felt really sore from taking that beating from McKenzie last March."

I now operate out of Colorado Springs in a private training center for the same reasons.

Q: I tried your German Volume Training. I can't, for the life of me, handle ten sets of any kind of chin. This is what usually happens...

Then I resort to lat pulldowns, but I feel like a pussy because it's such a "candy-ass" exercise. What could I do to help my chinning strength?

I attended your Los Angeles seminar. Throughout my life, I have met very few people who actually are "huge" enough to be able to shave their body parts without looking gay or weird to a "normal," non-gym oriented person. You meet this criteria. Your forearms are fucking huge! You definitely should shave them.

A: Regarding your pullups, you need to have more patience. The law of repeated efforts will enable you to develop the work capacity to perform all ten sets of ten. Your present strength levels just don't warrant the use of ten sets of ten in the pullups.

What I suggest is that you not start at ten sets of ten, but rather do ten sets of five reps as your first goal so that you can accumulate volume. Then I'd progress to ten sets of six, and so on.

In regard to German Volume Training in general, many people have trouble determining how much resistance to use. Say, for instance, you want to do ten sets of four reps. How do you determine what weight to use without several bouts of trial and error?

Just multiply your target rep range, in this case four, by two. For those of you who can't find your calculators, four times two equals eight. Now, chances are you know what weight you'd use to do an 8 RM in a particular exercise. That's the weight you'd use to do ten sets of four to elicit the proper response from German Volume Training.

Shave my forearms? If shaving body parts was my thing, I would be parading around the EAS booth at the Arnold Classic with plucked eyebrows and hair groomed by Eduardo of Manhattan, saying stuff to my cronies like, "Get the plane ready." This would no doubt impress many members of the bodybuilding audience, many of whom have an average IQ that's lower than that of a WWF audience. That is, an IQ of 5 (it takes 6 to bark).

Q: I am a football coach in New Jersey. I have been reading a lot about the Bigger, Faster, Stronger Program of lifting weights for high school students. I was just wondering what you thought of the program, and if you think it is a good idea for a high school football program.

By the way, I must say that your website, Testosterone, is absolutely wonderful. I love the "no holds barred" attitude of the site. Keep up the good work, and don't give in to being a pussy like some other publications.

A: The Bigger, Faster, Stronger program is a family-owned, multi-million-dollar business that seems to have genuine interest in helping high school students get stronger.

It has its advantages and drawbacks. It makes very strong use of basic motivational techniques while relying on basic movements. It produces results because it has structure–something lacking in most high school programs.

It does have its drawbacks, though. It makes use of exercises such as box squats and towel benches. Some of the dietary recommendations they make also need some serious improvements.

Q: What do you think of those parachute-like devices that are attached at the waist? Also, could you recommend a program employing them?

A: They are excellent if you plan on falling out of a plane. Using them as a training device isn't nearly as effective, though. Parachute training can be useful in training for short-term speed (100 meters or less). However, most of the ones on the market are too sensitive to winds and may, in fact, destroy your technique.

The vast majority of athletes need to do plenty of other things first to improve their short-distance speed, but I might recommend them to someone who already has superior sprint speed, i.e. someone who's placed in the top ten at the Nationals.

I should tell you, though, that Canada has the world's highest concentration of world-class sprinters as evidenced by their gold medal in the 4x100 meters in the Atlanta Olympic Games. To the best of my knowledge, none of them have ever used any of the parachute devices.

Q: I normally do squats, dips, chins, stiff-legged deadlifts, standing military presses (in short, the basics) for my strength workouts. I do 5-6 sets of 2-5 reps and rest 4-5 minutes between sets per body part. If I switched to strongman training for 3-4 weeks (log lifting, rock carrying, car pulling and pushing, and other "dinosaur" movements), how will this affect my strength and hypertrophy gains? What downfalls are there to this kind of training?

More importantly, do you really wear a fur skin hat, as mentioned in T-Mag?

A: You'll find that doing the "Dinosaur Training" as outlined by Brooks Kubik can only increase your strength on the more classical lifts. In fact, it's a type of training I'd like my athletes to do more of because I can't supervise all of them all the time.

You'll find new strength/size increases in your forearms, traps, and lower back once you get into strongman lifts. Your gains in hypertrophy may slow down in the show muscles like the biceps. Once you get back to more traditional training, muscle memory should allow you to hit new heights of strength.

Regarding the crack about the "fur skin hat" that appeared in a response to a feedback letter, it's just another example of Tim Patterson's jealousy. The latest thing to set him off was the recent Biotest Christmas party, where some of the female secretaries gave the executives G-strings made out of animal hides.

Q: Your advice is really great, and the mag and everyone writing for it is top-notch!

My question is about crossbench dumbbell pullovers [doing pullovers while lying across a flat bench]. I feel that it's a superior exercise for the upper body, and I alternate it week to week from chest day to back day. What's your opinion on this exercise? I go rather heavy (up to 115 pounds) and stretch as far as possible.

I read an article by Arthur Jones a long time ago in which he called the Nautilus machine version of the pullover the "upper body squat." We all know how good the squat is for building mass throughout the lower body and the upper body to some extent, but is there really an upper body version of the squat?

It seems to me that, since pullovers involve a lot of of muscle groups, they would be an ideal exercise. Any feedback would be greatly appreciated.

A: The pullover is a great exercise, but since Jones was selling the Nautilus pullover machine, he was obviously biased in promoting it. The biggest advantage of the pullover machine is that it takes the elbow flexors out of lat work, thus improving the isolation of these powerful shoulder extensors.

In fact, the Nautilus pullover was one of the few Nautilus machines that had a built-in resistance curve that matched the human strength curve for the shoulder extensors. A more modern and better designed version is the selectorized model from Cybex Eagle.

I'm not really keen on the crossbench pullover, as I've actually seen a few cases of herniated abs that were directly attributed to it. I'd rather have you do decline pullovers using an EZ bar, as they allow your shoulders to pivot more naturally. 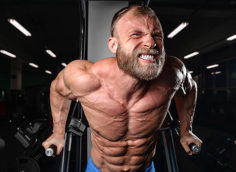 What you do AFTER your heavy barbell work makes all the difference in the world. Here's how to get your chest growing again.
Training
Lee Boyce December 17 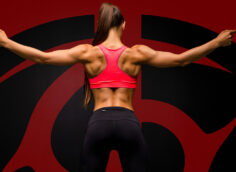 For pull-ups, use a grip that'll allow your wrists to rotate naturally. Here's why.
It Hurts Fix It, Tips, Training
Chad Waterbury May 30

Do you use straps, Olympic lifting shoes, or a belt? Should you be using them? Here's how to know.
Bodybuilding, Powerlifting & Strength, Training
Dr John Rusin December 15