Q: It seems like my delts never grow if I only do the big basic stuff, like overhead presses. I have to finish them off with some focused, burning exercises. Is that just me? And do you have anything new to try for a shoulder finisher?

A: Ah, you like metabolic stress work. I too have found that to get the delts to grow, they actually respond to higher reps and metabolic stress a bit better than just focusing on pressing heavier stuff over my head, but both are required to really maximize growth.

Let's focus on the metabolic stress work here, though. Despite the fact that the front raise is often shot down because "the anterior delts get enough work from chest and delt pressing" the 100-rep plate raise is money for the delts and traps. And I mean the medial delts too. Trust me, they get sore as hell from 100-rep plate raises where you bring the plate all the way up over your head. 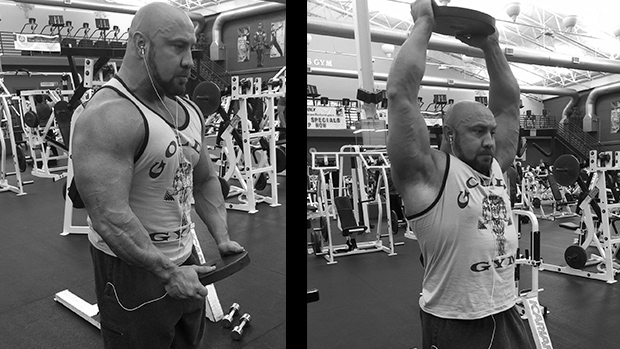 The execution is really important. On the lifting side, it's really a pull back – as if you were doing a face pull and lateral raise hybrid. With the supporting arm you're going to be pushing slightly as you lift with the other arm. (It's not a one-arm upright row motion.)

If you get this right you'll feel it big time in the lateral delt and even some posterior delt and traps. Start light and play around with it until you can feel the contraction.

Giant sets are another way to further increase the metabolites and spur on some new delt growth. This is an excellent giant set that Coach Kassem Hanson uses to blast the delts:

Here's another giant set to try. It's fairly simple, but brutally painful: 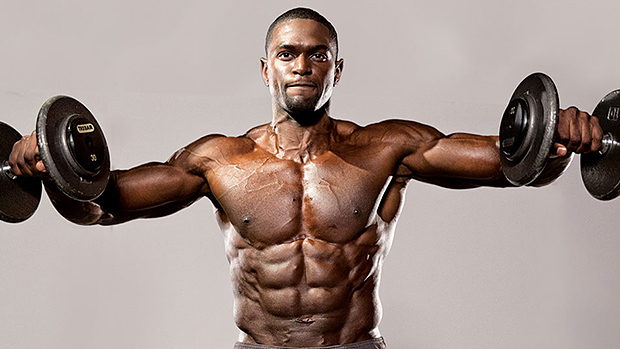 Q: A lot of coaches say the leg press is worthless, but I've never seen a big bodybuilder who doesn't use it. What's your opinion?

A: I'm not sure which coaches say that. Maybe one of those "functional" coaches who has people balancing on a Swiss ball while juggling a couple of midgets?

Here's the funny thing about these clowns – they had to change the term to "functional strength" because, as one might guess, the leg press and other machines can in fact be used to build strength!

So they couldn't say, "Well, machines don't build strength." Clearly they do. And don't even get me started on the ass-hats who don't like the Smith machine because "it locks the lifter into a specific pattern and makes it more dangerous" or because it "doesn't work the stabilizers." Sheep. 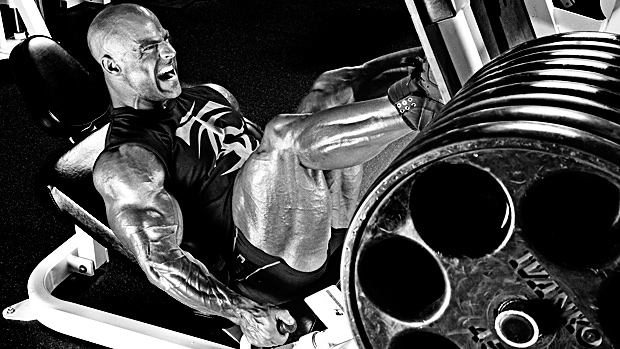 Where was I? Oh yeah, the leg press. In 2012 researchers did a study to examine strength training in older women, using all machines. Leg press, leg extension, etc. After 12 weeks, all these wonderful ladies increased their jumping ability. And the number of bodyweight squats they could do in 30 seconds increased by a whopping 18 reps.

There's a multitude of studies using the leg press to establish an increase in real life strength (running, walking, jumping, etc.) across virtually every demographic. They all end up showing the same thing. If you get stronger on the leg press, you end up with stronger quads in real life... not Matrix-style quads that only exist in a virtual reality.

Then there's decades of anecdotal evidence by virtually every experienced lifter on the planet who has done hard sets of leg presses for extended periods of time. What they ended up with was bigger and stronger legs.

Few things irritate me more than dogmatic strength coaches who believe that the answer to every question exists within a squat rack. It doesn't.

Q: How important is conditioning/cardio if my main goal is to just get strong? Is there a minimal level? What do you do?

A: You can get as strong as you're ever going to get without doing any cardio. In fact, you can be one of those amazingly fat strong slobs like I used to be.

And you can spout off dumb shit like, "Anything over 5 reps is cardio!" That is the mating call of the brutally out-of-shape powerlifter and those who don't compete in powerlifting but still call themselves powerlifters.

My favorite story was the time when I had to walk across a big parking lot and had to stop halfway through the trek and lean against a car. You know, to allow my low back pumps to subside. I don't miss those days.

Now if you're a defensive powerlifter you'll say something like this: "I don't care about abs! I only care about strength! And I have better leverages when I'm heavier!"

You mean when you're fatter. Okay fat boy, you know what else improves your leverages? More muscle. And it's also "functional" because, you know, it's muscle that lifts the freaking weight. Fat doesn't do that.

To be fair, I see a lot of jacked and lean powerlifters now. Apparently you don't have to get super fat to get strong. Who knew? Also of note, once I decided to implement serious conditioning work, I felt better overall and lifted better too. In fact, I hit PRs in both the deadlift and the bench press on my way back DOWN the scale.

So how important is cardio? If you want to feel awesome and recover better, then it's pretty important. Steady-state cardio has awesome restorative effects for both mood and sense of well-being. And intervals will help to increase work capacity in the gym. Here's the breakdown:

I recommend that 80% of your cardio work be of the steady-state, low-intensity kind. Walking outside is best because it reduces anxiety and stress. Try 30-45 minutes with the heart rate at 120-130 BPM.

If you're not good at math, that means you're going to do 4 steady-state sessions for every 1 interval session. Reason being, interval work is recovery intrusive. Too much of it will increase fatigue and detract from performance in the gym, rather than enhancing it. 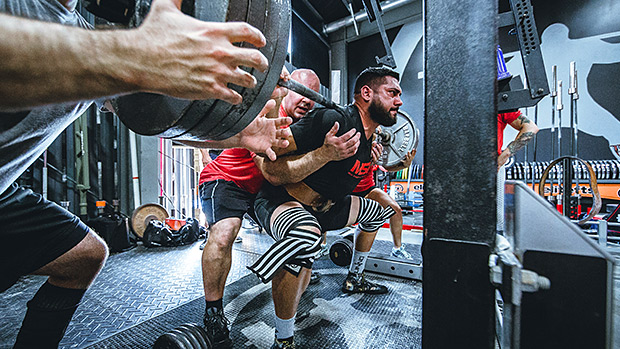 Q: I want to do a bodybuilding show this year and everyone at the gym said that I have to use steroids or I'll embarrass myself. Crazy thing is, I was told the same thing when I was thinking about doing a powerlifting meet. I'm talking LOCAL shows and meets. Is drug use that prevalent? Are "natural" competitions really natural?

A: Hold on, let's back up a bit. Let me explain to you how this really works: When you do a powerlifting meet, everyone there is going to be friendly, supportive, and encouraging. And that's not sarcasm.

The people competing in meets are mostly focused on their lifts and their own performance. They're usually nervous too, even the seasoned guys. The guys there competing against one another for world records are too, but they'll be eyeballing what someone else hit in order to make calls about their attempts.

For the other 99% of people at a meet, they just want to do well for themselves. Show up, have fun, make some new friends. Stop sweating the other stuff.

Oh yeah, and open light. The only person I've ever made fun of at a meet was this particular clown who drove all the way from New Jersey to Wichita, Kansas to do bench only.

At that point I tried to talk him into reducing his opener to something less egoish. He refused. "Nah man, I'll be good."

His arrogance bent him over. He missed 365 all three times. I've often wondered what that car ride back to Jersey felt like?

It's a little different. You don't want to be that guy that shows up and makes all the social media highlight (lowlight?) reels because no one can tell you ever trained, dieted, or even tanned a single day in your life. 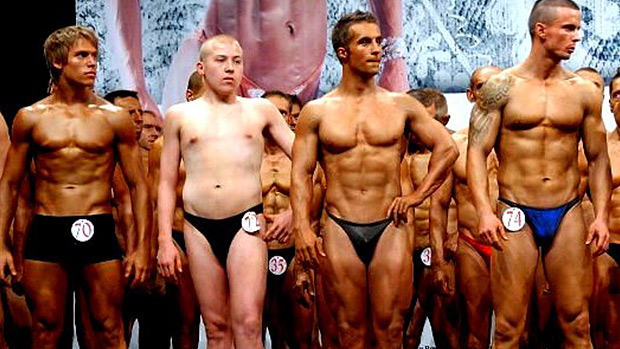 Take your conditioning seriously if you're going to go that route. Bad-ass conditioning in bodybuilding is what big totals are in powerlifting. Even if you don't win, people always respect the hell out of those who got truly peeled.

Some people who compete in tested federations are natural, and some are not. There are some freaks who constantly get accused of using that also consistently pass drug tests.

Passing a drug test doesn't mean you're natural; it just means you passed a drug test. But if someone is consistently passing drug tests, I'm going to give them the benefit of the doubt.

For the most part, I never cared. What someone else was doing had zero effect on what I could bring to the table come meet or show day.

If you want to compete, then compete and focus on the process. Focus on your efforts so that you bring your best self on show or meet day. Most importantly, enjoy it. If you're not enjoying it, then what's the point? 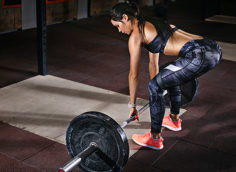 Get more lat recruitment from chin-ups and pull-ups with these cues: 1. Chest to bar. 2. Squeeze a tennis ball between your shoulder blades.
Back, Exercise Coaching, Pull-Up, Tips
Tyler Thomas September 2