A Russian martial arts instructor exposed me to super slow reps – which are probably way slower than you're imagining right now. It started with a four-minute push-up. You read that right: One rep, four minutes.

At the time I thought, "How bad could it be?" But about 30 seconds into it, I decided water-boarding would've been better. Like being water-boarded, there's no relief. You just endure the discomfort. It was a brutal yet highly rewarding day.

Then in Moscow a few years later, another Russian martial artist made me do a set of 30 push-ups stretched out for what seemed like a lifetime. The catch was that the eccentric (lowering) and concentric (lifting) phases each had to be 30-seconds long. Imagine that. That's one minute per rep, which equals a 30-minute set of 30 reps.

Turns out, this sort of thing is common among many schools of Russian martial arts. And incidentally, a few days later, I was training with a top kettlebell sport coach in Moscow when this extended-rep method came up again. But this time it was in the hellish form of isometric holds mixed with some super-slow transitions.

So what is it with Russians and this diversion into hell on earth? When I returned to the States I had to figure it out. So here's what I learned, and here's why you should partake in this unusual form of self-torture.

This is what it's called when you do the super slow work, and it's so effective it's disturbing. There is eccentric (lowering) quasi-isometric and concentric (lifting) quasi-isometric. But that's not all – there's also a passive and active element to this that you need to know about too. More on that in a bit.

So what exactly is quasi-isometric (QI) contraction? It's moving so slowly that the movement is almost imperceptible. When you do isometrics you lock yourself into a specific joint angle without moving. But quasi-isometric movement can include the entire range of motion, though both partial and full ranges of motion are effective.

For a practical understanding of QI, consider a common example of the eccentric-active version when training someone to perform a single pull-up. You'd have a spotter push you to the top position and then descend as slowly as possible, rest a few minutes, and repeat a few times. This is an example of QI. But there's more to it.

QI will give you unmatched strength throughout the full range of motion. This includes conscious and unconscious control of that strength, meaning, you destroy sticking points and bust plateaus if you're willing to suffer a little bit.

QI develops both inter and intra-muscular control while eliminating weak points in the range of motion. This is a big deal. Russian martial arts instructor Martin Wheeler has said that when we move quickly we're losing the majority of the training value.

It's true. Letting the load drop quickly means that it's not under our control except in the small portion of the range of motion where we decelerate the load. On the way up, we accelerate the load so that it will coast through the biomechanical crux and we decelerate it at the very top of the movement. Everything else just coasts, and that's a big problem for athletes and fighters alike.

The reason is simple. If your training doesn't develop strength through the full range of motion, you won't be able to just turn it on when you need it. Imagine the football player who gets hit in mid stride and you watch his knee buckle on national television. A player with a high degree of strength in the entire range of motion will be far harder to injure.

Finally, QI will help you to safely and rapidly stop and/or change direction with high precision because of its inter/intra-muscular coordination role. This means fighters can change the direction of strikes, football players gain agility, and those caught off guard recover faster and keep going.

In the beginning, if you choose to do it under load, have a spotter. Or experiment first by choosing something like a bodyweight squat or 30-40% 1RM bench press.

First choose the duration you're going to sustain for the eccentric and concentric phases. To keep it simple, just try 30-seconds each: 30 seconds down, 30 seconds up. This will be challenging because judging how much you should move per second gets really tricky.

Then play with it and you'll eventually develop this skill. If it's a more compound exercise like the squat, one rep is adequate. If it's more simple, like the bench, set a goal of 1-5 reps.

Great exercises include push-ups, sit-ups, bodyweight squats, and pull-ups, which means you can get out of your chair and try QI right now.

When it comes to loaded exercises, try starting with a 16 kg kettlebell for overhead presses, floor presses, front squats, split squats, or loaded sit-ups. Start with 3-5 sets of 1 rep.

Do 30 seconds per rep (15 seconds down, 15 seconds up) then work up to 2-minute reps. Rest 2-5 minutes between sets. Be advised that neurological fatigue is what will hit you first. If your form deteriorates, stop there.

Try it as a finisher. You could do QI at the end of a workout for 1-2 sets. For example, at the end of a bench press workout drop the weight to 135 (or whatever is relatively light for you) and do a few slow reps or just one rep as slow as possible.

A Word of Warning

It's best to use submaximal loads, preferably well below 70 percent of your 1RM. Most of what I do and prescribe is below 50 percent.

Above 80 percent there can be some awesome opportunities if you have a spotter or two. One very slow rep will sniff out whichever part of your range of motion is weak. Just be careful because you may experience rapid failure there! Get spotters to stay safe. If you stay under 50-70 percent, any weakness will be discovered without the risk.

You can also use QI to shore up weak or injured joints. A trick knee or bad shoulder can be fortified by QI training using the guidelines above.

Now we face an interesting issue when it comes to breathing. Don't hold your breath. You need to breathe pretty quickly. There's a specific method for this called "burst breathing."

For example, in the pull-up, if you were "active" you would tense all the muscles involved as you descended. To descend "passively" you'd focus on relaxing and using the very least amount of muscular tension possible to do the same thing. The passive approach increases maximal strength and active flexibility gains, while the active tends to be better for hypertrophy (building muscle).

I almost always recommend that QI be done passively – using the minimal amount of muscle activation possible. Actively try to keep the weight moving while relaxing everything as much as possible including the muscles you're using. This increases the neurological efficiency of the training.

But be aware of your own strength once you start doing this! I know guys who've accidentally torn off door handles after a few months of QI training. Strength is a neurological function so the better trained the nervous system is, the stronger you are.

Proven methods for building muscle and strength, getting leaner, and even increasing mobility.
Bodybuilding, It Hurts Fix It, Metabolic Conditioning, Powerlifting & Strength, Training
Dean Graddon May 18

Is ankle mobility messing with your training? First you need to diagnose the problem, then you need to fix it. This plan will help you do both.
It Hurts Fix It, Mobility, Training
Dr John Rusin September 19 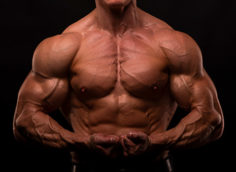 Posing practice for non-bodybuilders? Yes. Here's how flexing can speed up muscle growth and even make you leaner and stronger.
Training
Christian Thibaudeau January 25

The barbell push press is a strength and power-building staple. Here's how to get even more out of it.
Tips, Training
Nick Tumminello December 12