Nowadays, push-ups are either mocked, considered useless, or worse, forgotten about altogether. That's a huge mistake, and one that we need to address ASAP.

I can't tell you how many "experienced" lifters I've worked with who have absolutely no clue how to perform a proper push-up. Seriously. No clue. Here are some areas that need focus:

Too many people want to think in absolutes. Either they want the elbows flared out to 90 degrees, or they tuck them in hard by the sides. Neither option is great for your shoulders.

With the elbows flared excessively, a ton of stress is placed on the shoulder joint. It's also an incredibly disadvantageous position biomechanically, so not only will it feel like crap, but you'll perform like crap, too.

On the flip side, tucking the elbows in hard to your sides isn't a great idea, either. While most do this with the intent of sparing the shoulders, what ends up happening is that this excessive tucking causes the humerus to glide forward in the glenoid fossa. In normal people talk, you start to get an "owie" in the front of your shoulder.

Instead, find a balance. Make a 45-degree angle with your elbows, or simply "make an arrow." This cue works like a charm for shoulder health and performance.

This part is easy. Just keep the lower body tight. Sure, you can squeeze the glutes and flex the quads, but you don't need to go full-blown high-threshold when you're doing a standard push-up. Instead, find a normal amount of tension for the task at hand. Save all those high-tension strategies for when you're doing those single-arm, blindfolded push-ups on a medicine ball.

This is arguably the most important part of the body when performing a push-up. After all, tying together the upper and lower body is the reason we perform push-ups versus bench presses. Find and hold a neutral spine position throughout. If you laid a PVC pipe or broomstick on your back, you should have three points of contact:

If you want extra credit, make sure that you only have a slight (1 inch) space in between your lumbar spine and the stick. This will make sure your abs are optimally engaged.

Now getting into this position may be relatively easy, but the hard part is staying there when you actually do the movement. What you tend to see is a lowering of the body, followed by deepening lordosis, a caving of the upper back, and a head that droops towards the floor. Instead, lock the spine in throughout and you'll not only get a great upper body workout, but a great core workout as well.

Most people make push-ups unnatural and unathletic. If you're thinking about "pulling" your shoulder blades together when you lower yourself down, stop!

When most people think about pulling the shoulder blades together, they inevitably slam them together at the beginning of the movement and run out of motion at the scapulae. At this point, they continue to lower down, and all of that movement (and stress) moves to the shoulders.

To remedy this, think about making the movement athletic again. Don't think about pulling the shoulder blades together. Simply think about moving the scaps, shoulders, and elbows at the same time.

The second critical element of a great push-up is to focus on reaching at the start and the finish. Many athletes are locked into a poor position through their upper back and thorax:

Push-ups are a great tool to help remedy this, but only when done correctly. You may have seen that bro on Instagram cranking out sets of 50, 75, or 100 push-ups, but you'll note that he never actually finishes a rep. Sorry, but that's making things worse.

Instead, think about finishing each rep. Keep the chest out while simultaneously reaching long through the arms, or thinking about pushing the body away from the floor.

When done correctly, it should feel like you're stretching the area in between your shoulder blades at the start and finish of each rep.

It's funny when someone says, "Push-ups are easy! Can't we find a way to make them harder?" Then when you actually watch them do some push-ups, their hips are dragging the floor, their shoulders are all over the place, and their neck is protruding like an 80-year-old with osteoporosis.

Push-ups aren't the sexiest exercise, but first learn to do them correctly before seeking new challenges. Once you do that, there are three routes you can typically take to make them harder:

Use these if you want to go full-blown meathead and just get super strong. These include anything that increases the external resistance:

These are great options if you want to bulletproof your body and make sure things are in balance. It's not uncommon to see super strong guys who have shoulder or lower-back problems, so doing stability-focused progressions can clean up those weak areas and fix them up for the long haul.

Stability-focused progressions would include any exercise where there are elements of instability involved: unstable surface push-ups (TRX, Blast Straps, Jungle Gym, gymnastic rings, etc.) and push-ups with the hands on medicine balls.

Strong and explosive athletes have a tendency to get locked in the sagittal plane (driven into extension). If this becomes excessive, they lose access to their frontal and transverse planes, which can cause injuries up and down the kinetic chain.

Based on your needs and goals there are tons of different options at your disposal. And if you want the best of all worlds, simply rotate your emphasis every 2-3 months to help build a strong, well-balanced, and bulletproof physique.

Ever suspect something, but don't have the studies to back it up? These coaches have. Here's what experience has taught them.
Bodybuilding, Fat Loss Training, Powerlifting & Strength, Training
TC Luoma January 10 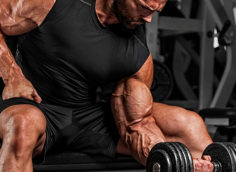 A new study involving both naturals and druggies sheds some light on this common question. Check it out.
Training
TC Luoma October 18