Do a pull-up every time you walk by the bar. Do 50 sets of one, 25 sets of two reps, or don't stop until you get 100 reps. Eccentric pull-ups or band-assisted. The list goes on.

For most guys, these methods don't work because none address the reason why your pull-up sucks. This article does.

Everyone knows that men, as a whole, are stronger than women. Men have more muscle, better strength-to-bodyweight ratio (most times), and more Testosterone. But looking closely at why women can't do certain things can give you insight into why men can't do things as well as they should be able to. (Insert inappropriate sexist joke here.)

Take an average in-shape woman (but not a star athlete), put her on the bar, and watch her try to do a pull-up from a dead hang. Often, she won't be able to move. Like, at all. Now if you help this same woman up through the first third of the exercise, she'll suddenly gain a tremendous amount of strength and often be able to perform a few reps on her own, as long as she doesn't drop down into a dead hang.

How does this relate to a man?

Most men suffer from the exact same lack of pull-up strength as women, the difference being most men have enough muscle mass to call upon–be it biceps, brachialis, brachioradialis, long head of the triceps, or teres major–that he will get up there. It'll just look ugly as shit. (You'll also notice most men avoiding dropping into a dead hang, because they know they're extremely weak there.)

Herein lies the problem of all the pull-up methods I listed earlier.

All the aforementioned muscles–like the biceps and teres major– are going to be strengthened doing 50 sets of one rep, or eccentric pull-ups, or whatever method you choose. But there's one muscle that not only won't be getting stronger. In fact, it'll be getting weaker because your body will be practicing not using it: the lats.

Think what you like. But if you can't bang out one pull-up where your upper chest easily flies up and smashes into the bar while your shoulders stay down and back, your lats–especially your upper lats–aren't working nearly enough. And they probably aren't working at all initially.

Liken it to chest training from a bodybuilding standpoint. As you press up out of the hole on a dumbbell press, you first feel your outer chest, and then the emphasis shifts as you press up further.

Pulling exercises are the same. When you initiate a vertical pull, for instance, you're going to pull through the uppermost portion of the lat, which can be found in your armpit when your arm is overhead. And if you don't get your upper lat from the very beginning of the motion, you won't ever get it.

A major problem is that the uppermost portion of the lat is so weak that doing full pull-ups, band pull-ups, negatives, or even assisted pull-ups on the lightest setting is going to be way too heavy. It's like trying to build glute function by doing hip thrusts with 315 before you do hip thrusts with bodyweight.

That's why I like lat pull-downs for activating and strengthening the upper lats. (But not the kind you're used to.) Yep, you read that right; I'm ditching pull-ups for a machine. But only for a while.

Most guys will go right to 170 pounds or something semi-heavy right away. (That's why most guys in my gym get beaten with the bar.) We just established that your lats are not working because your pull-ups suck. How is doing the same weight you've been doing going to fix anything? (Hint: it's not.)

You're gonna have to face facts. The muscle with the most potential to be the strongest muscle in your body–your lats–is extremely weak right now, especially the upper portion. That's why you have to go light enough that your lats can actually begin to work.

Admittedly, this method is a bit of a bitch; it takes concentration, discipline, and throwing your ego to the side for at least one month. But you'll come back to the bar much stronger and finally able to engage your lats.

The problem with the lat pull-down is that you have to concentrate very hard to get the lat to work from the start.

To do it, set up on the lat pull-down with a third of the weight you normally use. (If you're a 170-pound puller, you should start with roughly 60 pounds.) Grab the bar and let yourself dead hang while seated. Focus on squeezing your upper lat (it's in the armpit when your arms are overhead) before you do anything else.

Once you've squeezed the upper lat, pull your shoulders all the way down (without bending your elbow) and begin to pull the bar down using your lats. Go slow and do it smoothly. Make sure your forearm angle stays in line with the cable as the bar passes your chin, and pull the bar down to your collarbone.

The first few sets will be the worst, but by the fifth or sixth set you should really start to feel yourself pulling through the lat. I like doing eight reps since it's enough to get several cracks at the motion, but not so much that you're fatigued before you get to the next set.

As each week of this first month goes by, you should feel yourself getting stronger and better able to perceive yourself pulling through your lats. If you're especially in tune with your body, you'll feel your lats thicken up, too.

By the end of the month, it's unlikely that you'll be completely ready to ditch pull-downs for pull-ups, but you should start incorporating some pull-ups into your workout. (You should still take one day of the week to continue to work on the lat pull-down. Think of it as lat activation.)

Start with one or two pull-ups at a time. The only caveat: they have to come smoothly and relatively effortlessly. That's how you know they're viable lat-developing pull-ups.

Over time you'll be able to get higher and higher with greater ease, and eventually be able to ditch the lat pull-downs and move into straight sets of pull-ups. You may even be able to transition into muscle ups, which require incredibly explosive lat strength. But let's not get ahead of ourselves.

One way to make an exercise more challenging is to increase the range of motion. Here's an example.
Exercise Coaching, Glutes, Legs, Tips
Eric Cressey March 31

It's not a bad way to organize your training week, but it has its drawbacks. Check 'em out.
Bodybuilding, Tips, Training
Charles Staley September 12 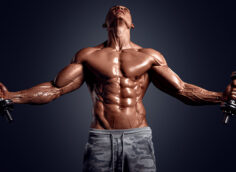 When I first approached corrective and performance exercise specialist Paul Chek about writing for Testosterone, his first concern was whether I'd choose to soft-peddle his article. In other words, he was worried that I'd try to "dumb down" his material.
Training
Paul Chek August 11