Part of being from Central Pennsylvania is that you grow up hearing a lot of quotes from legendary Penn State football coach Joe Paterno. My favorite quote of Joe Pa's is this dandy:

"The will to win is important, but the will to prepare is vital."

Everybody wants to win, but hardly anyone wants to do all the little things it takes to put a check mark in the win column.

That's where we have to be different from everyone else. It's not just about the sexy stuff –although sexy is very good – it's about the little things that get us closer to the W.

When it comes to the iron game, winning can take on many forms. Some want to be massive, super hero-esque behemoths, while others want to pick up the heaviest shit they can find. Any goal worth attaining requires preparation before the specifics come into play.

The fitness industry is saturated with terms. A lot of them are abstract and relatively difficult to define (functional training anyone?). Unfortunately, the term general physical preparedness is also used to describe several different training applications.

Most meatheads relate GPP to Louie Simmons and Westside Barbell, and for good reason; the strongest men in the world lift with Louie at Westside. Louie defines GPP as, "A degree of fitness, which is an extension of absolute strength."

It's simple and to the point, but what does it mean? Basically, Louie is saying that if you want to be big and strong, you have to do more than just bench, squat, and deadlift. You're going to have weaknesses, and having a general level of fitness and movement quality will help make overcoming your weaknesses much easier.

If you're an athlete, the term GPP takes on a slightly different meaning. Let's suppose that you play rugby. Any training that you do that isn't rugby specific (skill work and actually playing the game) is technically GPP. Getting stronger could potentially make you a better rugby player, but it isn't a direct application of skill. So while us meatheads might not consider weight room GPP, in the case of an athlete, it would be.

To summarize, for lifter or athlete alike, GPP is general training that improves your specific training by limiting your weaknesses, improving your quality of movement, and enhancing your body's ability to handle greater workloads. But for the rest of the article we'll refer to GPP for the iron brethren.

For the typical lifter, GPP programs often turn into high volume sled fests or body-weight movement extravaganzas. While that type of GPP can be warranted, only programming for the conditioning aspect of a general preparedness program neglects a great opportunity, namely improving the way we move.

I'm a big fan of Dan John's explanation of the five basic human movements, which are push, pull, hinge, squat, and loaded carry. It doesn't matter if you're a body builder, powerlifter, football player, or trying out for the next season of So You Think You Can Dance, mastering these basic movements will assist in displaying all other components of fitness.

That's why–along with using high volume activities like sled dragging for nonspecific work capacity–it's very productive to build GPP programs around improving basic movements. And there's no better time to improve upon these general or basic human movements than during the general physical preparedness phase of a program.

If you're a powerlifter, you can't train your deadlift effectively if you aren't hinging properly, and if you're an NFL linebacker, you can't be as explosive as you could be if you don't have the squatting pattern down. Building a base of solid movement is important before getting more specific.

So when should GPP programs be used, and how can they be implemented effectively? Let's take on each question one at a time and put together an awesome GPP template.

There are many opportune times to fit GPP into your programming. Here's my short list:

Beginning of the off-season

Bodybuilders, powerlifters, and most other athletes all have the competitive season and the off-season, and most come out of competition a wreck of mangled tissue. As tissue quality is restored, so should movement quality and general work capacity. When the rest after the competitive season is over, the first two to four weeks of training should be based around correcting imbalances and GPP.

After a training hiatus

So that two-week break you decided to take when you went on vacation in July of 2010 turned into a year and some change. Jumping back under the bar and expecting to be as strong as you were before your break could lead to some serious frustration or worse, injury. With a little prep work, your body will adapt to the heavy barbell work and you'll be much more injury resistant as you get back into using heavier loads and higher volumes.

Coming back from an injury can be a long and painful process. It's a lot like taking a hiatus from training with the added stress of healing and the frustration of limitations. It's likely that your body has developed some sort of movement compensations as a result of the injury as well. So re-ingraining efficient movement patterns while you restore a basic fitness level is a necessity before hoisting a respectably loaded barbell.

Getting some GPP and movement prep work done during a week or two-week long deload can be great as you prepare for your next training phase. It can give the specific adaptations you wanted to elicit during the last part of your program a chance to emerge while priming you to jump into the next step in your progression with full force. Keeping a low volume version of your specific training intact while focusing on general prep during deloads can go a long way towards ensuring constant progress.

Light sled/Prowler work, along with bodyweight exercises, have long been staples of recovery workouts. Most of the muscle contractions are concentric, there's a lot of blood flow generated, and movements can be trained without a ton of training stress or intensity. Add a couple lightly loaded strength movements to the recipe and you get speedy tissue recovery and solid technique practice.

We've got some good ideas on when to use GPP and movement prep programs, now all we need are some tips on how to implement them. Below are some general guidelines to follow for developing your own prep program, along with a sample program.

The question that I get asked most often about GPP programs is, how long should they last? It's a loaded question, because it depends on how you plan to use the program. If you've been out of the game for a while a prep program can last for up to a month. Deloads can last one or two weeks, and if you're using it for recovery or conditioning purposes, one or two sessions per week can be useful.

Since the aim of the GPP program is to prep for future work, promote recovery and/or improve levels of conditioning, the intensity of the loads will be relatively low throughout the program. However, it's a great opportunity to add training volume for several reasons.

First, increasing the volume allows more practice with the basic human movements we're looking to master. Second, we're using the program to promote a fitness base and increasing volume helps us meet that end. If you're focusing on the conditioning aspect of a GPP program, then shortening rest periods week-to-week is also great.

If a given session isn't centered on sled/Prowler work, I like to use circuits. Circuits promote near constant movement, allowing for a great deal of volume in a short amount of time. They also provide the opportunity to train many movement patterns in one workout. Most of the GPP programs I write involve circuits, but they're obviously not the only choice. Agonist/antagonist and upper/lower exercise pairings also work very well.

If you're planning on sled and Prowler work, you can program for either distance or time. Louie Simmons says to follow the rule of lower-body drags for distance and upper-body drags for a set amount of time. I listen to what Louie says. So should you.

To reinforce good movement patterns you have to be able to move efficiently. Limitations that come from poor soft-tissue quality and crap-tastic mobility are a dramatic hindrance to moving the way we're supposed to. So if there's any point during your program that long, drawn-out soft tissue and mobility sessions are warranted, it's during the GPP phase. A simple approach of attacking all the areas we modern humans usually have problems with will do wonders. Those areas (and issues) include t-spine mobility, shoulder stability (and mobility), hip mobility, and ankle mobility.

This list might seem long to some, to others it may just look like a movement bank for a regular program. But these are the general movements we want to develop as a lot of specific training is dependent on them being well grooved.

Bodyweight mastery is critical, so there should be a lot of bodyweight-only movements included in the program. It's important to do the bodyweight versions of the movements listed above, but calisthenics such as jumping jacks are also worth including. Build as much bodyweight training into your GPP programs as possible, even if it's just during your warm-up.

Here's a sample program that can get you started on designing a GPP program of your own. It's one I've used personally after coming back from some time out of the gym.

I progressed through this program for three weeks, manipulating the variables by increasing volume. Although the volume was high, I was nowhere near failure on any set. Use it as is or as a means to get the ideas flowing for a program of your own.

Hopefully this article helps you understand how a general physical preparedness program can be a great ally in your fight against weakness and atrophy. Hit a GPP workout on an off day this week to boost your recovery, or save this article for a rainy day after some time out of the gym. And as Joe Pa would say, never forget the importance of preparation!

This metcon workout hammers your entire body... in a fun way. Check it out.
Metcon, Tips, Training
Mike Sheridan November 5

These straight-talking, common sense “commandments” ought to be emblazoned on the walls of every lifting facility in the world.
Bodybuilding, Powerlifting & Strength, Training
Dan John January 26

There's a lot to pay attention to when you squat, but one training method gets everything working correctly. Check it out.
Powerlifting & Strength, Squat, Tips, Training
Joel Seedman, PhD May 21 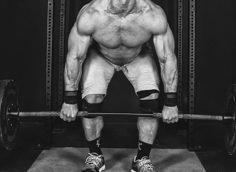