Quite a few of us here in the dank offices of Testosterone have taken to doing a four-day split where we separate quad training from hip-extensor training (which includes hamstrings, of course). This small deviation from working both "sides" of the legs on the same day has made tremendous improvements in all of our backsides.

Why, not a day goes by where the women in the office don't form a human corridor for us to pass through as we come to work in the morning. They stand there holding papers and such to make it look like they're working, but they're really checking out the slabs of ass meat packed into our Dockers.

Trouble is, there aren't that many articles out there about hip-extensor training. After all, training your hip extensors is also about training your ass, and no one really wants to talk about that in polite company.

Luckily, Coach Poliquin has few social graces. He's more than happy to talk about this type of training, and here are detailed descriptions on how to do three dynamite exercises for the whole posterior chain.

Snatch Deadlifts on the Podium

This is one of my favorite "pressed for time" exercises. In other words, if an athlete only has a short time in which to reach his training goals, this exercise fits the bill. This exercise works great in improving the strength of the whole posterior chain, along with the vastus-medialis muscle groups.

In fact, it's so effective, that trainees who do it for the first time experience incredible levels of delayed onset muscle soreness. It's not uncommon for trainees to experience severe, Ratso-Rizzo-like tremors after pushing the limit on this exercise. Furthermore, it's not uncommon to take up to 14 days to completely recover from an exhaustive workout centered around the snatch deadlift on the podium.

I really like this exercise for sprinters as part of their general preparatory period. Many of the female sprinters that I train (who also currently hold the World's best times in their respective disciplines) like Carlette Guidry, Michelle Freeman, and Nanceen Perry have used it in their strength preparation phases. And, when used with the correct loading parameters for hypertrophy (generally, rep ranges that are somewhere around six to eight or a little higher), it's particularly useful for athletes who need to increase their overall bodyweight in record time.

Place a four-inch platform on the floor (if your gym doesn't stock any pre-made platforms, one of those Reebok steps will suffice). Place an Olympic bar in front of the platform.

After stepping onto the platform, squat down and grab the bar with a snatch-width grip (four to six inches wider than your shoulders). The feet should be shoulder-width apart. The back should be flat, and the pelvis and head aligned with the spine. The shoulders should line up vertically over the bar, and the scapula should be retracted and depressed.

You may want to use straps for sets calling for three or more repetitions. This will prevent the isometric strength endurance of your gripping muscles to be a limiting factor in overloading the posterior chains and your quadriceps.

Just before takeoff, suck your stomach in and squeeze your glutes. Driving with legs, raise the bar off the floor under control. The angle of your back to the floor should remain constant until the bar has reached at least mid-shin level. At that point, stand up, forcing the hips "through" by driving with the glutes.

This is absolutely one of the best hamstring builders. It works the hamstrings in their hip-extension mode. Therefore, this movement has a lot of carryover to sports, particularly the short-term speed ones (where sprints are required).

Standing good mornings were the staple of the training regimens of most former Soviet Union athletes. However, they're rarely done in North America, unless you count what some colleges interpret as their full squat. (Please note that the previous sentence is dripping with sarcasm.)

I like prescribing it as a foundation exercise before starting a squat cycle, particularly if the athlete has been diagnosed as having a weak lower back. If I prescribe the standing good morning for a given cycle or period of time, I'll center the other leg exercises around the variations of step-ups and split squat exercises. I won't prescribe squats.

If the primary goal is to drive good morning poundages up, you shouldn't try to concurrently drive squat poundages up – this will overtrain the lower back and lead you nowhere.

Place a barbell on a squat rack or a power rack. Stand facing the bar. I prefer to use a tribar Olympic bar as the unique shape of the bar prevents it from rolling, but I realize that these aren't very common. So, a traditional bar will do.

Duck under the bar and place it on the meaty area of the traps. Assume a wide "collar to collar" grip. Bend the knees about 25 degrees to relieve pressure on the ilio-tibial band.

Keeping a lordotic curve (the spine rounded), lower the upper body until your head gets down as far as it will go (unless you're one of those weird circus geeks who can stick his nose in his ass).

Lift the trunk while keeping the knee-joint angle constant. If you have trouble getting the hamstrings to fire (activate), concentrate on the glutes, mentally trying to squeeze them.

I was introduced to this exercise 20 years ago by former Canadian national weightlifting coach Pierre Roy who, in turn, learned it from talking shop with his Polish colleagues.

Seated good mornings are a great movement for athletes who have yet to be exposed to intensive lower back work. In other words, I'm more likely to prescribe it to a beginner than to an Olympian. However, there are times when it's a proper choice for an elite athlete.

Every time I show this exercise to someone, I always make sure to warn him or her that it won't necessarily feel like much when they're doing them. I invariably get the following response:

"Coach, this doesn't work the hamstrings – I only feel it in the lower back."

I either slap them or tell that we'll "talk about it tomorrow." It never fails. I always get an apology the next day that goes something like:

"Oh, guru, how I can I have doubted you? I can't even sit on the john without screaming in pain. Please forgive me, I will never doubt your infinite training wisdom again."

Well, something like that. Since I use this exercise mainly in general preparatory phases, I tend to prescribe slower tempos (such as 3030) and higher repetitions (8-12). Therefore, I use it mainly for anatomical adaptations (building the size of the hamstrings, teaching recruitment, etc.).

I may even prescribe extremely slow tempo (up to ten seconds) for the concentric range. When I choose this route, I'm mainly concerned with creating intramuscular tension by forbidding the use of momentum. Of course, when I use such slow tempos, I rarely exceed six repetitions per set.

Place a barbell on a squat rack or a power rack. Stand facing the bar. I prefer to use the tribar Olympic bar as the unique shape of the bar prevents it from rolling, but I realize that these aren't very common. So, a traditional bar will do.

Duck under the bar and place it on the meaty area of the traps. Assume a wide, "collar to collar" grip. Back up and sit down on an exercise bench and point the knees outward so that you have kind of a triangular base.

Keeping a lordotic curve, lower the upper body until the lower ribs make contact with the adductors (the muscles inside the thighs).

Raise the trunk until it's perpendicular to the floor. Concentrate on initiating the movement with the lower vertebras by concentrating on them.

I urge you to work these movements into your training routines. The podium deadlifts are an excellent, "hardcore" movement. They, along with good mornings, done properly, will go a long way in developing that all-important posterior chain. And, for you bodybuilders out there, they'll do wonders for that all-too-rare superior hamstring/glute tie-in.

If the good mornings are a little too ambitious for you, start with a preparatory phase that employs seated good mornings. Remember, there's more to working hamstrings than just doing leg curls! 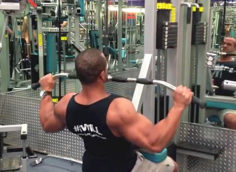 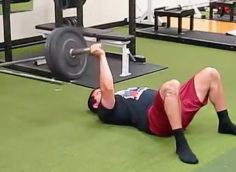 Many experts consider the crunch unsafe, but it can still be a good ab exercise if you follow a simple rule. Check it out.
Tips, Training
Joseph Brigley February 25