Editor’s Note: Why are we running an article about a workout program that probably very few of you do? Look at it this way: Between 3 and 4 million people have purchased the program. We figure it’s our civic duty to talk about this and other similar programs. Friends don’t let friends drive drunk, and friends don’t let friends do P90X. Besides, it’s a huge Google search term, so maybe some of the poor bastards who want to try it out will instead stumble over here to T Nation and see the hypertrophic light.

Although this is mainly about the “evils” of P90X and the many other programs that basically involve bouncing around in front of your TV, the best place to start this critique is to examine the downside of what actually does work best for most people: progressive resistance training with weights.

I’m taking this approach for two reasons: First, because it’s important to appreciate that no exercise or training system is without its flaws. The best we can really hope for is a worthwhile benefit-to-cost ratio. And secondly, it’s only because of these flaws (or perceived flaws) that dangerous and inefficient programs like P90X are able to flourish in the first place.

So with that in mind, let’s take a quick look at the downside of progressive resistance exercise, which I’ll just call “weight training” from here on out. Despite the many proven benefits of weight training, there are a handful of problems with this activity:

Now with these four objections to weight training firmly in mind, it’s time to unveil the primary “hurdle” that the marketers of P90X must clear in order to close the sale:

The primary goal of P90X is to convince you that you don’t need weights to build a great physique.

That’s because, if the marketing minds at Beach Body can pull that off, the world is its oyster, because suddenly you don’t need a gym membership, which means you can work out at home, and further, you won’t need to invest any time in learning how to lift. And, as an added bonus, you’re really gonna hurt. Sometimes a bit too much.

Most infomercial exercise programs have a common denominator: They capitalize on the most prevalent misconception that newbies have about exercise, namely, that it must hurt if it’s going to do any good. Fortunately, as the creators of these programs have discovered, it’s almost unfairly easy to cook up stuff that hurts. In fact, if I chose a random person off of the street, he could easily create a workout that would devastate the most gifted Olympic athlete.

If only it were that easy to create a training program that helps people become stronger, leaner, faster, and less prone to injury – those type of results require the expertise of an exercise professional, not a multi-level marketing convert masquerading as a fitness trainer.

Finally, it’s helpful to have the ability to distinguish your goals from the costs of attaining them. I certainly don’t object to people paying a price in the pursuit of their goals, but the price should never be the goal itself. See the difference?

But Isn’t Anything Better Than Nothing?

Asking such a question is the sign of a reasonable, rational person, so I do appreciate the intent behind it. On the surface at least, it certainly seems like a thoughtful query. But no, I don’t think anything’s better than nothing, and here’s why.

Imagine that you’re really out of shape – you haven’t seen your toes (or other important appendages) in years, and you’re understandably anxious about starting a new exercise program. Then, late one night, through the haze of orange Cheese Doodle particulate matter, you suddenly catch a glimpse of the jacked and tanned Tony Horton himself pitching his latest DVD set. You’re tired, you’re frustrated… in short, your defenses are down. And you know what? Tony’s telling you everything you wanna hear. In fact, you’d swear he can actually read your mind:

So you whip out the ol’ Visa and dial that 800 number. In a few days, the DVD’s arrive, and they’re beyond slick. You’re psyched and ready to roll. So the next night, you throw on a pair of sweats and pop that DVD in. Here are a few negatives that you should be prepared for:

From a principle-based point of view, these injuries are no surprise to me. After all, if you don’t have weights, the only way to make your customers “feel the burn” is to perform high reps at a fast pace, with minimal rest between repeats. That particular combination of variables increases fatigue while simultaneously decreasing movement control, which decreases net safety. 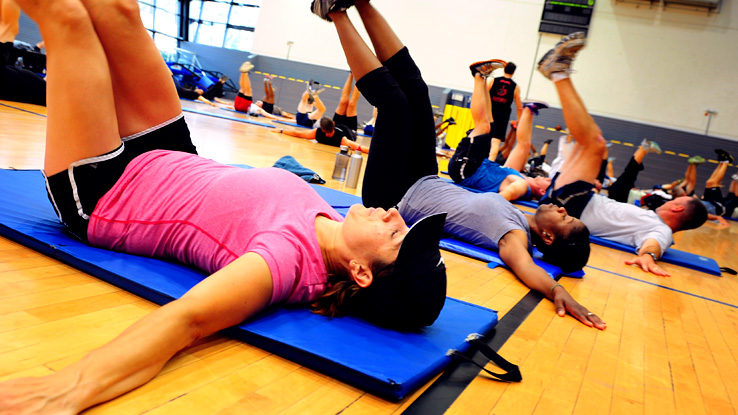 One of P90X’s biggest selling points is the concept of “muscle confusion.” I found this on the P90X website:

“P90X uses targeted training phases so your body keeps adapting and growing. You’ll never “plateau” – which means your body will never get used to the routines, making improvements slow down or even stop.”

Please allow me a moment here, because there are so many great ways to destroy this claim, I’m not even sure where to start. Here’s how I’ll tackle it: Since I know many P90X converts liken themselves to being super-intense athlete types, maybe it might be instructive to look at how the typical Olympic athlete trains. Let’s take the sport of weightlifting. When you look at a 3-minute video clip of great weightlifters in training, it’s quite exciting and inspiring. You’ll wanna go straight to the gym after watching these amazing lifters.

Being one of these lifters however, is a very different story. The truth is that, day after day, week after week, month after month, year after year, nearly all National and World-level weightlifters perform no more than about 6 exercises, and perhaps a few slight derivations of them. It’s really like being a monk – if you’ve got even a speck of ADHD in you, you won’t be able to hang. Every day is pretty much the same old thing: snatch, clean & jerk, pulls, squats. Every day. Over, and over, and over again.

Muscle confusion isn’t about preventing plateaus; it’s about giving beginners enough variety so they won’t immediately get bored and quit. And when you constantly vary your training, you might not be as likely to quit, but you’re not going to make any real progress.

Think about learning a language in high school. If you take 4 years of French, you’ll be quite proficient by the time you graduate, right? Now, along the way, there will be days (and perhaps weeks) where you’re sick and tired of studying the subject, but that’s the price you pay for personal development. If instead, you took French as a freshman, Spanish as a sophomore, Italian as a junior, and Japanese in your senior year, you’ll be a lot less bored, but the price you’ll have to pay is reduced competency. This is a universal principle of personal development, and it applies to the weight room as much as it does to the classroom.

Now, is there any truth to the whole “muscle confusion” idea? Sure. In fact, I used to read about it all the time in Muscle & Fitness back in the 70’s. It simply refers to the fact that a monotonous physical stimuli will lead to reduced adaptations over time, as compared to a more varied stimuli.

Where people go wrong however, is that they overestimate the amount and scope of variety that’s really needed to minimize plateaus (eliminating them, contrary to P90X’s marketing promises, isn’t possible). The weightlifters I mentioned earlier simply vary their loads to accomplish that purpose. They don’t, for example, do a 4-week “incinerator” phase, because if they do, they’ll lose much of the progress they made previously.

Like much of P90X’s marketing, muscle confusion is a concept that has a kernel of truth to it, but it’s a very old idea, and if you mention it to an experienced lifter, he’ll smile in knowing recognition of your ignorance.

So, What’s The Alternative Then?

Now whenever I’m criticizing something, I think it’s only fair to provide an alternative to the problem I’m pointing out. But in this case, what I’m going to suggest really isn’t an alternative at all – it’s really the gold standard – the standard for which P90X is supposedly an alternative.

Now of course, with proper nutrition in place, P90X can help you lose weight. That’s not saying much, however, since proper nutrition by itself can help you lose weight. So can a really bad case of diarrhea. What you really want is to lose fat. The problem is, fat loss is usually accompanied by muscle loss as well (the ratio of fat/muscle loss depends on a number of factors). The reason that progressive resistance training is so important is that it helps to offset the loss of muscle while you’re in a caloric deficit. This means that you don’t merely lose weight, you lose fat. And that’s what really changes bodies.

Nope, certainly not. Even the worst programs have a few folks who benefit. And there’s no doubt in my mind that there are people who enjoy and actually benefit from doing P90X. And if you’re one of those people, the hazards I’m speaking of here clearly don’t apply to you. What I’m addressing here however, are likelihoods of success as compared to other approaches. And the bulk of the evidence is clear – progressive resistance training, when performed intelligently, is by far the safest and most effective way to making meaningful changes to the human physique. While programs such as P90X manage to bypass the perceived shortcomings of resistance training, on balance, they don’t deliver the same results by any stretch of the imagination.