The Truth About Overrated Exercises

Good exercises can still be overrated when you have an exaggerated perception of their importance. Why does it even matter? Because you'll overuse them at the expense of other valuable exercises.

I'm a fan of farmer's walks and loaded carries in general. They're great for grip work, both beginners and advanced can do them, and they work as core training for athletes. But should every workout include a loaded carry? No. That's where it becomes overrated.

Think of the loaded carry as a form of locomotion and not a foundational category of its own. Sure, every workout should include a locomotive movement, but not necessarily loaded carries. To better understand what I mean, here's a list of movement patterns that guide my training:

Locomotion is the ability to move from one place to another. It's essential, but there's more than one way to do it.

Here's an analogy. There are plow horses and there are thoroughbreds. Every thoroughbred can perform loaded carries because they require zero athleticism, but not every plow horse can do things like skip, shuffle, or carioca with efficiency and fluidity.

Not everybody is training to become a pack mule. Plus, no matter how many loaded carries you do in your workouts, carrying heavy and awkward stuff around in daily life – such as doing manual labor or helping a friend move furniture – always seems more challenging.

Coach Stephen Alexander Ellis makes a good point about this:

"The emphasis on 'loaded carries' for folks outside of specific populations is largely overrated and redundant. If you already deadlift, lunge, goblet squat, front squat, back squat, etc., you get enough of the purposed benefits of the loaded carry."

Loaded carries are better considered under the broader umbrella category of locomotion. Some trainers might be underutilizing those other valuable locomotive exercises that provide fitness and coordination benefits to everyone, from athletes to seniors. Of course, there's no reason you can't do multiple locomotive exercises in the same workout.

If you want to get some of the benefits from the loaded carry but don't have the floor space to do it, try this variation using the NT Loop Band.

Many trainers have their clients doing Pallof presses until they're blue in the face. They do it kneeling, half-kneeling, standing, and even go as far as putting bands through weight plates and sling-shotting the plates to pertubate the band. Trainers bend over backward to "progress" this exercise, which is when it becomes overrated.

The Pallof press is a good teaching tool to feel what it's like to keep your shoulders and hips in line to begin learning how to perform dynamic cable rotations properly, but it's often used as one of the main rotational exercises.

But it's just an isometric exercise, and the strength gained from isometrics is limited to only the range of motion trained. So, you're not building strength in rotation where you need it most, where the torso rotates and shoulders turn beyond the hips.

By only training in the middle position of rotation, you're not building strength at the beginning of the swing, throw, or punch. This is what generates the rotational power that drives the hips and shoulders to center in the middle.

A much better rotational exercise is a dynamic cable rotation. You're strengthening rotation over a larger range of motion, one that's used in rotational power generation.

Some people call the Pallof press a "stability" exercise because you resist rotation. Well, to better isometrically resist unwanted rotation, you need to create a training stimulus that makes you stronger. This brings me to another problem with the way most people do the Pallof press.

By kneeling or standing with your hips shoulder-width apart – how trainers commonly teach this exercise – you don't have a good enough support base. This means you can't work against sufficient enough loads to create an effective strength stimulus.

To get stronger, whether you're doing isometric Pallof presses or dynamic cable rotations, standing and taking a wider stance – feet about six inches outside of shoulder-width – gives you a far better base of support. This allows you to work against heavier loads.

I'm not saying this exercise is useless. It just becomes overrated when it's perceived as a key rotational exercise for functional performance. I don't see its value over other options that make better use of our valuable training time.

Here's a far better exercise for training rotation. It has all elements of the half-kneeling chop, minus the drawbacks plus potentially more benefits. It's the cable bar press:

The split stance offers the same thing trainers like about half-kneeling chops: it locks the hips while promoting rotation at the thoracic spine. The reciprocal action of the arms also happens here while creating far more involvement of the core musculature. Plus, you can use heavier loads due to the split-stance position, which creates a better stimulus for getting stronger.

You can also do this exercise with your lead leg on the same side as your pressing arm. This increases the demand on your torso muscles since the cable is trying to turn you in the opposite direction of your back foot. Therefore, your back leg and hip can't help you as much as when the cable pulls you towards your back leg.

If you don't have a cable bar, you can use this variation, which involves a reciprocal push-pull motion that also lights up your torso to resist rotation.

Once again, you can do this with your lead leg on the same side as your pressing arm, which will further challenge your core to maintain your torso position.

Here's how to find your best grip on dumbbell bench presses, a grip that'll allow you to press without pain AND build muscle.
Tips, Training
Dr John Rusin October 11 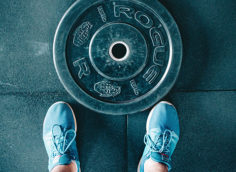 You don't need an hour to get a heart-pounding workout. All you need is a barbell and 20 minutes. Try this.
Metabolic Conditioning, Metcon, Tips, Training
Jason Brown August 25

“Eccentric isometrics” are probably the best way to increase strength and size. As a bonus, they'll help you to move like a tiger and feel awesome.
Bodybuilding, Mobility, Powerlifting & Strength, Training
Joel Seedman, PhD February 13