What's better than being big and strong? Being big, strong, and powerful. Being someone who performs like an athlete AND looks jacked.

Sadly, not many lifters check all of those boxes. Instead, most only focus on the big and strong part, often turning themselves into one-trick ponies who, despite having high levels of maximal strength, are limp turtles outside of the gym.

While maximal strength is important (and the foundation for every other quality, really) it's just one piece of the puzzle. To become a complete package, perform a synergistic combination of strength, power, and speed work. The secret? Master the force-velocity curve.

It's a basic illustration of the inverse relationship between force and velocity. In a nutshell, it depicts how maximal force is developed at low velocities (squatting with 95% of 1RM), and maximal velocities occur at low forces (performing bodyweight jumps). Everything else falls somewhere in between.

There are five zones that make up the force-velocity curve:

While some coaches may disagree on the exact percentages associated with each zone, the zones themselves don't matter all that much. Really, just about any movement can be adjusted towards either side of the curve, which makes the curve more of a continuum than anything else.

What's more important is that training up and down the entire curve – as long as it's done right – is a one-way ticket to Gainsville.

Each point on the force-velocity curve provides different physiological adaptations, which makes training up and down the entire curve the best approach for developing simultaneous strength, muscle, power, and athleticism. Here's why:

It leaves no strength quality untouched.

Training up and down the curve is similar to the Westside conjugate approach: it trains each quality on the strength hierarchy – maximal strength, dynamic strength, and repetition strength – under the same umbrella.

While some qualities like maximal strength may constitute the foundation for others, all qualities are interrelated. Force is force, after all. Bring up one quality and all of the others benefit.

Since power is the offspring of equal parts strength and speed, complementing high-force training with high-velocity training is the only way to maximize power development. In the absence of either, any attempts at increasing power will be suboptimal.

Both maximal strength and maximal speed work target the type-II fast-twitch muscle fibers that have the most potential for growth. That means training at both ends of the curve not only increases muscle recruitment, but also teaches slow-twitch fibers to "behave" like fast-twitch fibers (muscle-fiber type shifting) by increasing their size and force potential.

Everything that falls in between is where the other hypertrophy-inducing mechanisms like muscle damage and metabolic stress occur.

Training up and down the curve spurs gains in strength, power, and muscle mass – a trifecta that can turn even the dopiest of lifters into high-performing athletes.

Ultimately, the goal of training across the force-velocity curve is to shift the entire curve to the right, an indication that every trainable quality has improved. As a result, no strength quality, hypertrophy mechanism, or performance metric will go untouched, nor will any quality have to be put on the backburner in pursuit of another.

The maximal speed zone is all about pure, uninhibited velocity, which means that maximal speed training should involve minimal (if any) load to allow for peak muscle contractile velocities to occur. The best example is sprinting. Other examples include band-assisted jumps, depth jumps, band-assisted plyometric push-ups, and light medicine ball throws.

To fit maximal speed work into your training, perform 1-2 power-based movements prior to your main lift for 2-4 sets of 3-5 reps.

If you're squatting, do vertical jumps of some type. If you're pressing, perform plyometric push-ups or medicine ball throws. If you want to save some time and spice things up, try pairing up your strength and power movements via contrast training.

The maximal strength zone entails lifting at maximal or near-maximal intensities, which makes it about one thing: big-time force. So it doesn't really matter if it takes 3 seconds or 30 seconds to complete these reps. All that matters is that the bar moves from point A to point B.

The big lifts are the bread and butter of maximal strength training. For the upper body, that's the bench press, overhead press, and chin-up/pull-up. For the lower body, it's the squat, the deadlift, and all their variations.

Use heavy loads with 90-100% of 1RM. Other intensification methods can also be used like slow eccentrics, pauses/iso-holds, or opting for exercises with lower loading capacities (front squat vs. back squat). In any case, sticking to the 1-5 rep range for 3-5 sets is the key.

These zones are similar in that they generally utilize the same exercises – namely, the compound lifts as well as some multi-joint accessories – and are performed as primary accessories following the big lifts of the day. The big difference is their force-velocity tradeoff.

Generally, strength-speed training lives within the 4-8 rep range at intensities of 80-90%: the "sweet spot" for hybrid strength-size gains.

4. Fill in the remaining gaps with accessory work.

Everything in between is where most basic accessory work – "repeated effort work" in Westside lingo – takes place, typically making up about two-thirds of most lifters' training. The goal of training in this middle ground isn't necessarily to bias force or velocity, but rather to accumulate volume, bring up weak points, and put on muscle.

There's a lot more wiggle room with accessory work in terms of potential set-and-rep schemes and loading parameters. Generally, sticking to 6-15 reps at intensities ranging from 50-80% is a safe bet. Depending on your goals and how much time you have, extra pump work can be tacked on in the form of isolation exercises, machine work, high-rep band work, etc.

While training up and down the force-velocity curve is a must, figuring out where you stand on the strength-speed totem pole can provide valuable insight as to how you should allot your training time.

Fortunately, doing so isn't complicated. To quote Eric Cressey, "If you're fast, train strength. If you're strong, train speed. If you're neither, stop thinking so much and just train."

If you're a newbie lifter or velocity-dominant guy, spend the remainder of your time (after your basic accessory work) on the left side of the curve to juice up your strength. Here are some ways to do it:

As simple as it sounds, the mere act of subbing out 2-3 sets of speed work for an extra 2-3 sets of maximal strength work can be a game changer for getting accustomed to handling heavier loads, enhancing inter and intra-muscular coordination, improving movement efficiency, and ultimately getting stronger.

Ramp up the reps.

Ramping up the reps just a tad – say, between 3-6 reps for maximal strength work and 6-8 reps for strength-speed work – is an easy way to accumulate more volume and place a greater emphasis on hypertrophy, which most newbies and velocity-dominant guys need.

Stick with the same exercises for 6-8 weeks.

For weaker lifters, the basics reign supreme. Instead of switching up your compound movements every week a la Westside Barbell, stick with the same lifts for 6-8 weeks to track your progress and ensure continuous strength gains over time.

If you're a bigger, stronger lifter who throws around weight but moves like molasses, biasing velocity will help you bust through a plateau. Try the following strategies:

Instead of going for straight-weight 1RMs every time you lift heavy, try using accommodating resistance with slightly lighter loads – say, 75% of 1RM – to attain higher velocities out of the hole and develop more bar speed.

Instead of performing, say, 4x3 back squats for maximal strength, try 6x2 using the same load. You're doing the same amount of work, albeit while minimizing intra-set fatigue, moving at higher velocities, and avoiding ugly grinder reps.

Similarly, cluster sets – which are performed as singles with short bouts of rest in between reps – allow for more speed on each rep without requiring a drop-off in load.

Power is less linear than strength. It can vary depending on stance width, bar position, body angles, etc. Try using specialty bars, experiment with different stances and grip widths, use multiple forms of accommodating resistance, and switch up your angles from time to time.

Manipulate your jumps, sprints, and throws to place a greater emphasis on elastic power by utilizing the stretch reflex, employing band assistance, and using minimal (if any) load.

For everyone in between, a balanced approach works just fine. One proven strategy is to start at either end of the force-velocity curve and work up (or down) in a periodized manner, spending 3-4 weeks in each respective zone and moving across the entire curve every 2-3 months.

One of the zones on the force-velocity curve is peak power, but it's tough to implement. The optimal loading parameters needed to maximize power vary widely between individuals.

Getting all of the goodness of the force-velocity curve is fairly simple. On a microscale, train multiple qualities on the curve every workout. On a macroscale, move up and down the curve on a weekly and monthly basis.

The primary takeaway? The best training approach is the one that blends multi-faceted strength training with various forms of speed and power work. The end result will be a full shift of the force-velocity curve to the right, a clear indication that every physical quality has improved.

Use a unique variation of the plank to bench press more weight safely. Here's how.
Tips, Training
John Gaglione February 16 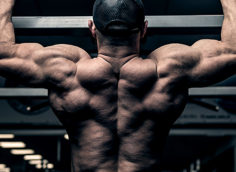 Skinny legs are the norm among men. Don't be normal. Here's what to do.
Legs, Training
Chad Waterbury April 4 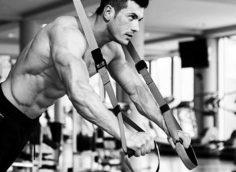