The Overhead Squat (OHS) has become the “de rigueur” movement for many functional fitness enthusiasts. However, most aren’t using the OHS as a supplemental lift to improve their snatch – they’re using it as a benchmark lift, a metric, at times even a parlor trick.

This brings us to a larger question – who should be training the OHS and why?

First, novice trainees learning the classic lifts like the snatch can benefit from overhead squatting. The novice Olympic weightlifter who trains the OHS will gain confidence through trial and error, while simultaneously learning how to efficiently manipulate their anthropometrics throughout the full range of the movement. These factors allow a newbie to safely develop the neuromuscular control and mental focus necessary for training the snatch.

The second group that can benefit from the OHS are the more technically advanced Olympic lifters who find themselves getting pinned under a heavy snatch. In this instance, a strength disparity is present. If a trainee can receive the weight overhead during a snatch but is too weak to stand it up, they need to train the OHS.

The third group is a hybrid, composed of novices who are looking to add dynamic barbell complexes to their current bodybuilding program. Barbell complexes featuring the OHS can be used for fat loss and localized hypertrophy (shoulders and upper-back).

This type of training offers an efficient and mentally stimulating alternative to steady state cardio. Barbell complexes also provide the bodybuilder with a novel training stimulus, which can lead to gains in areas that are rarely trained through typical bodybuilding routines like flexibility, agility, coordination, and balance. 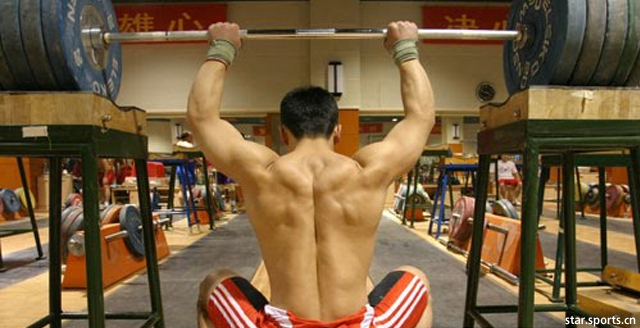 While all of these examples are unique, they each require some degree of technical proficiency to safely begin this type of training.

Take our beginner Oly-lifter. He probably resembled a giraffe on roller skates when first attempting an OHS. This lifter needs to get comfortable with the movement and not just the act of the OHS, but also the process of getting the barbell out of the rack and overhead.

Good safety habits start here. Remember, this stuff can get dangerous when you cut corners. I’m reminded of an athlete who broke one of her cervical spineous processes while overhead squatting. The injury occurred when she failed to get the bar locked out overhead! So, trainers, please take some time to teach your athletes how to safely get the bar overhead and how to bail out before overhead squatting.

Before we go over the bailout procedures, we need to determine grip. Since the OHS is a precursor to the snatch, use a snatch grip. To determine the width of the snatch grip, start by taking a wide grip on the barbell. Then, adjust the grip until the bar rests slightly below the bony protuberance of your hip.

It’s important to remember the established hand positioning; use the tick marks on the bar as reference points. This small effort will pay dividends down the road by protecting your junk and your hips once you start snatching.

Next, you’ll need to get the barbell over head. I recommend placing the barbell in a squat rack and taking the previously established snatch grip. Place the bar on your back like a high-bar back squat and take four steps back.

I’m a big fan of this technique for getting the load overhead, but I never allow novice athletes to lower the bar from overhead back to the rear rack position. This eccentric phase places too much stress on the shoulders and could lead to neck injury. I prefer trainees simply use a controlled drop of the barbell and then re-rack.

Now that we’ve established the proper way to get the load overhead, we can move on to the bailout. The bailout is a fairly simple process but carries several caveats.

First, it saddens me when I see someone OHS with a torso parallel to the ground and their arms splayed out like a hawk ready to pounce. Some might be able to pull off a “hawk squat” with feats of contortion, but most will just end up getting hurt. 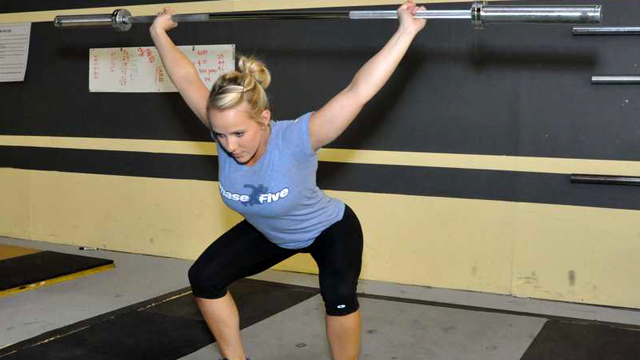 Mel Siff describes this phenomenon as “the reach back,” an odd and disconcerting phrase that can be heard in both gymnasiums and maximum-security prisons alike. From here on out let’s just stick with hawk squat.

Siff does a great job of explaining the pitfalls of the hawk squat: “Trainees who overhead squat by reaching too far back with the bar will never be able to support very heavy loads. They also have less control over the bar and may be in an unsafe position if it ever comes time to dump the bar.

The proper way to dump the bar during an overhead squat is to push the bar behind you, let go, and move out of the way quickly. Having the torso over-inclined with the shoulders flexed to their end range of motion is not a position that allows one to safely dump the bar.”

This leads to the next safety precaution. When attempting an OHS, it’s critical that the trainee achieve proper orientation of the shoulders. Appropriate shoulder orientation will mitigate the risk of injury and help achieve an optimal training effect.

This rarely happens, unfortunately, due to poor coaching, inflexibility, and the liberal use of the teaching cue “active shoulders.”

The shoulder joint (glenohumeral) is highly susceptible to injury. The shoulder is built for both mobility and stability. Unfortunately, excessive shoulder mobility can lead to a dangerous reduction in stability. On the other hand, orthopedic dysfunction in the shoulder will cause increased rigidity and raise the potential for injury.

In both cases, the cue “active shoulders” has no place and I’d strongly suggest that any individual who has joint dysfunction refrain from attempting the OHS.

When a trainer gives the cue “active shoulders,” the top part of the upper arm (humeral head) moves away from the opposing joint surface, causing instability. When a client’s shoulder is “active,” the skeletal muscles surrounding the joint will become increasingly fatigued as the space inside the joint increases.

Forcing the shoulder into this position for a prolonged time will cause instability and the bar will drift away from your center of mass, resulting in a missed lift. Mark Rippetoe makes a solid scientific case for using “active shoulders” when pressing overhead, however, the OHS is not a press and the use of this technique will limit the training of optimal loads and increase the risk of injury. 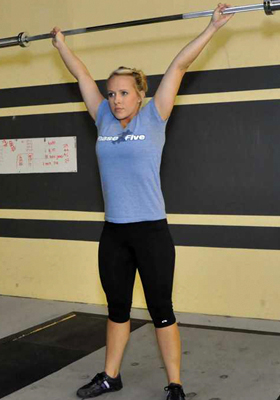 From a biomechanical standpoint, the cue “active shoulders” is wrong when attempting an OHS, and from a training standpoint, it’s ineffective. The stamina of the localized musculature in the shoulder dictates load, not the large muscles of the trunk and legs.

If the muscles surrounding the shoulders burn out before the lower body receives an appropriate training stimulus, a systemic training effect can’t occur.

Let’s imagine that your new client can back squat 375 pounds and the OHS is a new movement for him. We’ll start him off with 95 pounds for three sets or five reps. Upon cueing “active shoulders,” he descends into an OHS and completes the first set unbroken. However, he clearly struggles on the last two reps.

On the second set we start to see the tissue surrounding his shoulders start to shake and spasm. He goes on to miss rep four and on the subsequent set only makes a double before losing the lift behind him.

In this scenario, it’s obvious that localized muscle fatigue led to a poor training stimulus. The submaximal load of 95 pounds failed to stress anything other than his shoulders, resulting in a wasted session. The sinister villain behind this failed outcome was the cue “active shoulders.”

The problem presented above can be rectified with one simple cue, “Pack the Shoulders.”

It’s something I’ve appropriated from the kettlebell crowd and successfully applied to various movements in the gym. 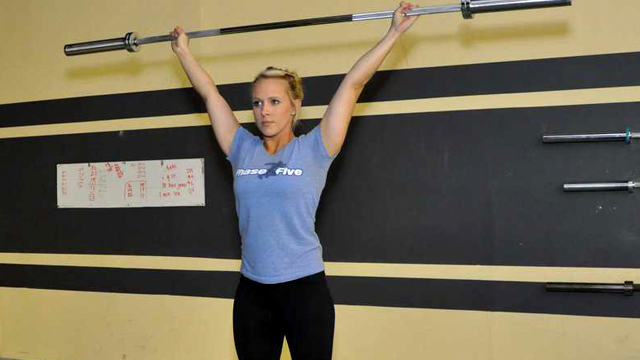 The act of packing the shoulder will cause the humeral head to come in contact with the opposing joint surface, making the skeletal structure – not tissue – bear the majority of the load. This will allow a trainee to hold more weight overhead longer by negating the localized muscle fatigue seen in the previous example.

As mentioned, some individuals who display orthopedic dysfunction may not be capable of this technique. It’s the trainer’s job to prevent these individuals from attempting movements like the OHS. Forcing a client to attempt a movement that his body is incapable of doing safely is negligent.

Everyone training the OHS should become acquainted with how a “packed” shoulder feels.

The easiest way is to take a snatch grip on a PVC dowel and place it in the overhead position. When it’s directly overhead, try to externally rotate the shoulders and draw the humeral heads into the socket. The cue “wrap your lats around your torso” is often effective.

You may find this position feels odd or uncomfortable. That’s irrelevant. As you continually use this method, your body will accept that it’s the most efficient way to hold a barbell overhead with a snatch grip for an extended time. By minimizing the space in the shoulder joint and drawing the humeral head into the socket, the joint should compress automatically.

One way is to master the technique with sub maximal weight. The muscles that separate the shoulder are less likely to become involved when the weight is light. Try to pretend the weight is heavy, making sure you use a valsalva breathing technique to stabilize the trunk and protect the lower back.

Next, slowly descend into an OHS. It’s important to focus on the packed feeling in your shoulders during the squat and try to keep your torso as upright as possible.

Gradually add weight, but keep in mind that if you begin to lose the lift, you must relax the shoulders before you bailout. Once a novice trainee can safely bailout during the various stages of the lift, it’s time to get them started on a training program. 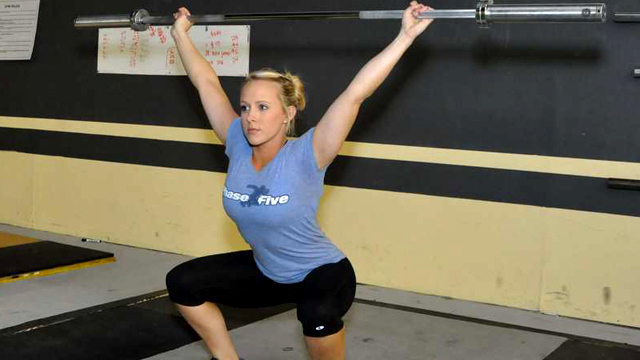 The needs of the novice Oly-lifter clearly differ from that of the advanced. The advanced trainee is such a specialized and complex athlete that I’d be doing them a disservice by recommending any type of one-size-fits-all training program.

The novice, however, benefits from structure and repetition. This is best achieved through a volume-based training program that employs a technical focus. I like to use the first few weeks of the initial mesocycle to assess a trainee’s faults, strengths, and weaknesses.

The best way to accomplish this is by using a density style format that breaks the classic lifts into segments. Our goal here isn’t the development of power or strength, but proficiency and skill. Once this cycle is completed, we can take a more individualized approach.

The weights being used during this initial training should be based on a “Rate of Perceived Exertion” (RPE) using a scale of 1-10. The first week of this cycle will look something like this:

* Every Minute on the Minute (EMOTM) for ten minutes

This is an example of a generalized novice training-program that’s designed to allow the coach and athlete to develop a long-term plan based on their individual needs. This initial effort will pay big dividends in the form of long-term progress, innovation, and injury prevention.

At this stage, the OHS plays an important role in this process, but in the future may fade from the scene as a trainee’s strength and proficiency improves. It’s the coach’s job to determine when that time has come.