You're captured by hostile terrorists and held captive in a large jail cell with just a bunk bed in the corner, a barbell, and plenty of plates. The commander informs you that you're free to lift weights during your captivity, but you can only perform ten barbell exercises.

If you're caught performing more than ten exercises or adding bodyweight movements, you'll be shot on the spot. Armed guards peer into the room constantly, itching for you to break the rules.

For some baffling reason, you're also sharing the cell with Megan Fox.

Develop a ripped, muscular physique to entice Ms. Fox, and build maximum strength, power, and conditioning so you can break away and escape from your captors.

You quickly consider your options and decide to create a list of ten "money" barbell exercises that can add slabs of muscle to your frame while making you more powerful (and of course more appealing to Ms. Fox).

Because you're a smart guy, you break the list into seven categories:

You carefully consider the hypertrophy, strength, power, and conditioning adaptations that each exercise will provide as well as each exercise's ability to transfer over to critical fight and escape skills that you'll need later.

You decide to stick to movements that work a lot of muscle.

Increased strength won't lead to increased power and explosiveness if the strength can't be applied rapidly. Rate of Force Development (RFD) is the most important quality for explosive movements such as jumping, sprinting, and striking. The jump squat will increase RFD and lead to higher vertical jumps.

Power work should always be performed first in the workout when the body is fresh because it targets the nervous system. The jump squat will prime the quads for subsequent strength work. Try to leap as high as possible and focus on smoothly absorbing the shock upon landing.

The jump squat will help you jump and climb over walls during your escape.

The power clean to push press is the most versatile movement in the bunch. It will improve RFD, which will increase your vertical jump.

This exercise will serve as your primary lateral deltoid and trap developer. Increasing strength on this exercise will let you use more weight on leg exercises as you'll be limited to the weight you can get onto your shoulders. You'll need to get good at this exercise fast so you can muscle up heavy weight.

The power clean to push press will prime the hips for subsequent strength work and help you take down your attackers and climb over walls during your escape.

No girl of Megan Fox's caliber wants a guy with scrawny legs. The full squat is a quad-dominant movement that will maximally develop your quadriceps, adding serious mass. It also provides you with bottom-range glute strength and helps keep the hips mobile.

The full squat will help with jumping, kicking attackers, and kicking down doors.

The walking lunge is an extremely versatile exercise. Good choice. It's a unilateral quad-dominant exercise that hits the quads and adductor magnus very hard, thereby leading to front and inner-thigh hypertrophy. It will help provide you with balance and stability, which will transfer to other lifts and increase agility.

It will also keep the hips mobile and build acceleration and power in running and horizontal jumping. Agility and acceleration are two vital qualities that will increase the likelihood of a successful escape.

The walking lunge provides bottom-range glute strength and will help you "shoot in" on your attackers so you can take them down. It will also help you break down doors. If done for high reps, this exercise will provide dramatic conditioning benefits.

The deadlift is the ultimate back developer. Isometrically, it pulverizes the entire trap, rhomboid, rear delt, lat, and erector spinae musculature. It's a hip-dominant exercise that hits the hamstrings hard and provides mid-range glute strength. This exercise is extremely versatile, leading to tremendous grip strength and takedown power.

The deadlift will help prevent the likelihood that one of your attackers submits you and foils your escape plan should you encounter a hand-to-hand combat situation.

The glute bridge is a critical exercise in your arsenal. It will serve as your primary glute builder, as this movement delivers an extremely high dose of glute activity throughout the entire range of motion. This is very important because, well, chicks dig a guy with a nice ass.

The glute bridge allows you to move a ton of weight and hammers the largest muscles in the body, including the glutes, the hamstrings, the adductor magnus, and even the quadriceps, albeit from an isometric contraction.

Should you engage in hand-to-hand combat, the glute bridge will help you escape dreadful mount positions and improve your chances of submitting your attackers.

It will also provide your thrusting musculature with adequate stamina, which is a critical aspect of your relationship with Ms. Fox. To make this exercise bearable, we will use the pillow and sheets to cushion the pressure on the hips.

You choose the bridge press over the floor press because you know the pecs like to be stretched into a full range of motion, and you want them to be maximally developed.

The bridge press is a horizontal press that mimics a decline bench press from a bridged position and will serve as your primary pec, front delt, and triceps developer. This exercise will help you push your opponents forward, aid in strengthening the forward arm swing portion of sprinting, and will help you climb over walls.

If done explosively it will transfer to punching power and greatly improve upon your striking ability.

You choose the underhand grip because you want increased biceps contribution. The underhand grip bent-over row is a horizontal pull that will lead to considerable lat, spinal retractor (mid-trap and rhomboid), rear delt, and biceps hypertrophy. The entire posterior chain will be worked hard isometrically, as well.

The underhand-grip bent-over row will dramatically improve posture and aid in grappling and the backward arm swing portion of sprinting.

You know in order to maximally develop the abs you need to target them directly. The barbell rollout is an amazing exercise for the abdominals and the obliques.

Also, since you aren't able to perform a true vertical pull movement, the barbell rollout can strengthen the lats in a somewhat similar manner as a pull-up and will serve as your "vertical pull."

A chain is only as strong as its weakest link, and the core is the transfer region between the upper and lower body. You are going to perform the barbell rollout from a standing position and focus on performing slow eccentric repetitions.

The barbell rollout will improve your sprinting, jumping, and striking power. It will also lead to lat hypertrophy and help you muscle your way over walls.

The landmine is a total-body conditioning, core stability, anti-rotation exercise that will lead to abdominal, oblique, and upper glute hypertrophy. The trick is to pivot the feet, avoid twisting at the spine, and focus on rotating at the hips. The landmine will lead to increased rotary strength and power, which is extremely important for your mission.

You will use the transferred benefits of this exercise to disarm, punch, strike, and take down your attackers.

You've been training with these ten exercises for a few months and have made amazing progress. You've added 20 pounds of muscle and feel more powerful and agile than ever. It's finally time to plan your escape.

What? You don't want to go now? You and Ms. Fox are doing the horizontal mambo a few times per day and the prison food ain't so bad?

Oh well. At least you know you could muscle your way through the guards and escape if you needed to. Job well done, soldier.

Okay, maybe the delivery of this article was a little corny, but it's the message that's important–not the delivery. The exercises I described will build a supremely conditioned body, regardless of what you choose to use it for. 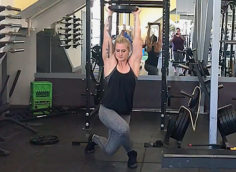 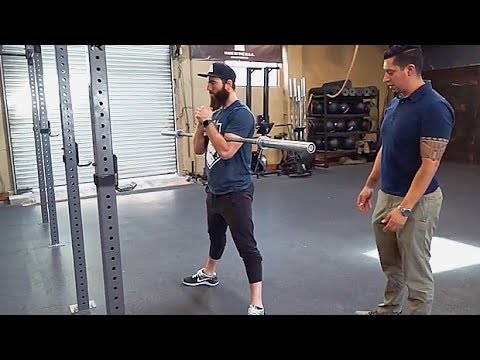 It's not broscience, it's science-science. And here's why you need it for optimal muscle growth.
Tips, Training
Bret Contreras & Brad Schoenfeld, PhD March 24

Get your mind on the weight and on the clock. This training strategy will help you get more done in less time.
Powerlifting & Strength, Training
Charles Staley May 16