As an undergrad and squat newbie, I struggled to reach 300 pounds. Having long legs, a short torso, and long arms, I was built to deadlift. By the end of my senior year I'd pulled 500 pounds but was still sorely behind on my squat. That summer a strength and conditioning coach gave me his old Olympic lifting shoes. My squat jumped 20 pounds as I was no longer turning the squat into a good morning. I continued to squat with Olympic shoes for a year before returning to wearing Chuck Taylors. After taking my Olympic squat shoes off and switching back to Chucks, the squat got easier. What the heck happened? 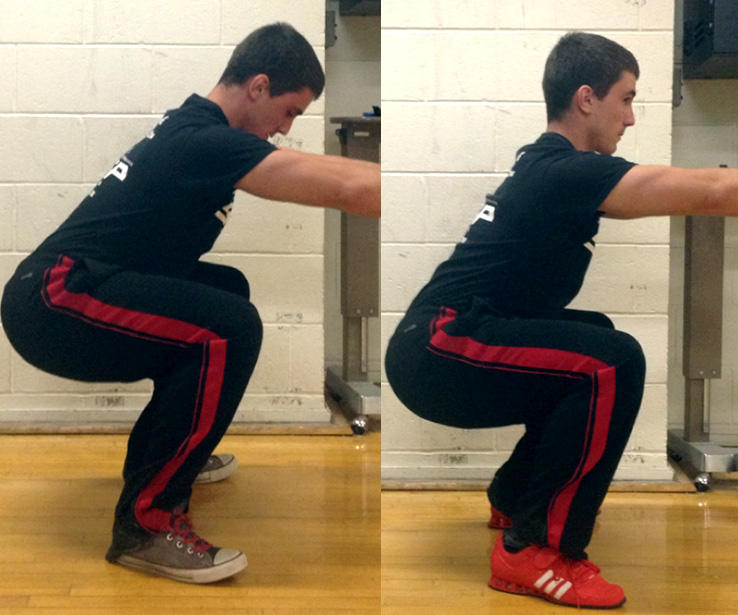 Olympic shoes helped early on in my squatting career but later they seemed to hinder performance. Why? And what's best for you? In order to figure this out we need to examine how the use of a heel lift affects squatting mechanics in bodyweight squats and moderate intensity squats and if that translates to squatting closer to, or at, a 1-rep max. One of the other theories concerning the benefits of lifting shoes (with at least a 2-inch heel) has do with increasing ankle mobility, which decreases the tension in some of the lower body musculature. This may help with knee control while reducing foot pronation.

There haven't been many studies done on squatting with Olympic shoes, but Sato, et al. showed that subjects using squatting shoes and squatting 60% of 1RM experienced a decrease in the amount of forward trunk lean. That reduced trunk lean translated into decreases in the shear forces imposed on the lower back. (They used 60% because they found that using 80% of the subjects' 1RM varied squat speed, which altered the kinematics of the squat.)

This knowledge might be good for strength coaches working with inexperienced athletes. Olympic shoes might help beginner to intermediate squatters maintain a more upright posture and therefore better form. They would be good for trainers who work with clients with low back pain that's brought on by shear forces as well. That's great information to have, but what about the people who are past – or looking to push past – the intermediate level? The squatters looking to hit 400-plus pounds?

A quick examination of the footwear of elite level squatters shows that most of them aren't wearing Olympic weightlifting shoes. T Nation contributor John Gaglione squats nearly 900 pounds... no weightlifting shoes. At my last meet, Andrew Hollenbeck had an incredible raw 505 squat at 148 pounds. No weight lifting shoes. Jim Howell has a geared squat of over 800 pounds. No weight lifting shoes. If you look at record-holding powerlifters you see that the majority of them don't wear Olympic shoes. In fact I was scolded for wearing mine when I took a trip down to Allentown, PA to lift at a powerlifting gym there. 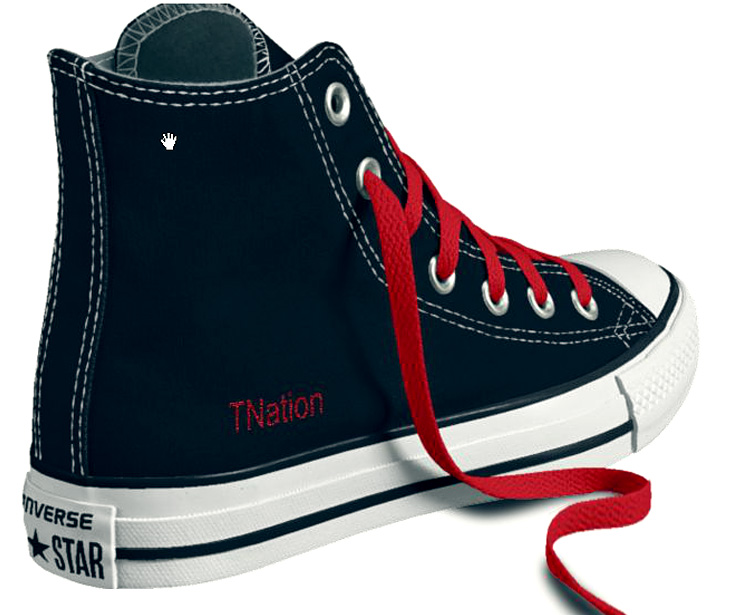 So if Olympic shoes supposedly improve form by allowing the lifter to stay more upright, then why don't we see elite-level squatters wear them? To my knowledge the research on squat shoes for elite lifters and how it alters the squat is nonexistent, so we can only guess. The Sato study mentioned earlier only recorded how the squat changed at 60% of 1 RM in collegiate athletes who may have been strong (weight used was not given), but certainly weren't elite level strength. We do know that increasing load changes kinematics. It's entirely possible that they would have gotten just as much of a forward lean with 90% of their load with and without squat shoes.

As you recall, wearing Olympic shoes allows the knees to come forward more, which allows for a more upright torso position. Looking at Olympic weightlifters during the catch phase of the snatch or clean, you can see the knees are well over the toes and the torso is relatively upright. However, it seems that this doesn't matter for powerlifters. This could perhaps be attributed to other things Escamilla found – that powerlifters don't have to squat as deep, that the bar is on their back (instead of their shoulders), and that lifters with a wider stance had more hip flexion than those with a narrow stance.

The powerlifters may be doing a hip-dominant squat that engages the glutes and hamstrings more than the quadriceps. Of course, if the narrow-stance powerlifter experienced more knee flexion than hip flexion, then perhaps the Olympic shoes would help them. A squat with more knee flexion may engage the quadriceps muscles more and that's one of the benefits of using the Olympic shoes. 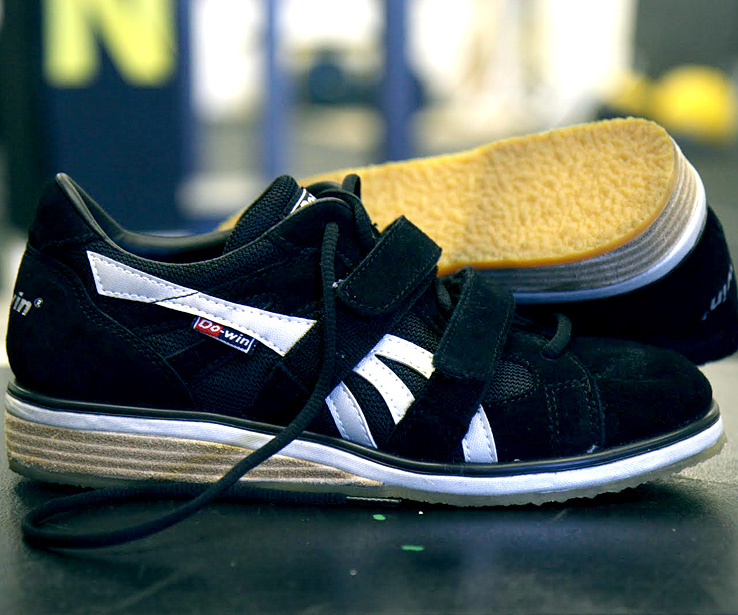 Are Olympic weightlifting shoes the answer to your squatting dreams? It depends on a few things like, what level squatter are you? What type of squat you have? Is it quad dominant like an Olympic lifter or hip dominant like a powerlifter? And finally, what are your goals? If you're a beginner or intermediate level squatter, Olympic shoes may help you increase your numbers. Based on the available research on low to moderate intensity squats, it seems that Olympic shoes and heel lifts may help you improve squat form and in turn move more weight. The increased quadriceps activity from wearing Olympic shoes may help lifters get bigger quads as well. If your goals lead towards bodybuilding and bigger quads rather than powerlifting, Olympic shoes may help.

Is your goal to just squat as much weight as possible? Since your goal is to squat a house I can assume you already have a decent squatting base and are past or close to breaking past the intermediate level. Hypertrophy is just something nice that comes along with lifting big weights but it's not your main concern. If you have a medium to wide stance your squat is more than likely hip dominant and it works the glutes and hamstrings more than the quad dominant squat.

As such, I'd recommend wearing Chuck Taylors. We rarely see elite powerlifters moving big weight in Olympic shoes. Not only is it the preferred footwear of powerlifters, but Chucks are also considerably cheaper so you're not breaking the bank on a 200 dollar pair of squat shoes. Research on squat shoes in elite level squatters, to my knowledge, is nonexistent so trusting the guys who wear Chucks with 800-plus pounds on their backs seems to be the best answer we have now.

To quote Louie Simmons, "As far as shoes go, Converse Chuck Taylors are best. Don't have $100 shoes and a 10-cent squat."

It's the most important key to muscle growth. And it'll fry your CNS and lead to injury. Wait, which is it? A little of both. Here's why.
Bodybuilding, Tips, Training
Christian Thibaudeau January 16