Having started my life in the iron game as an Olympic lifter, I've always been influenced by the training done by the most explosive athletes in the world.

The Olympic lifts have a rhythm to them like no other. After a big fast pull, the weight rockets up high overhead before slamming back down to the ground. It's physical poetry in motion.

Even as a teenager and just learning about lifting, I knew that the Olympic lifts were for me. Big weights? I'm interested. Fast? Sounds like something my type II muscle fibers can get down with. Slam it to the ground at the end? Where do I sign up?

So at the ripe old age of 15 and just two weeks into my training, I sat down and planned it all out. Soon, through the simplicity of the overload principle, I would have the world beat. By only adding 1 kilogram to each lift (the snatch and the clean and jerk) every week, I would have the world record in the snatch in only 2 years and the world record in the clean and jerk in 2.5 years.

Well, you might've noticed that my bio fails to list world records in either the snatch or the clean and jerk. The reason? The simple overload principle fails to deliver indefinitely as gains don't always come on a weekly basis. Gains do come, however, with improvement in your movements and improvements in strength.

Recently, I decided to return to the competitive platform for the first time in over 10 years. I needed a program that would drill my movement patterns, but also help me get strong at both the snatch and the clean and jerk.

So I put together the following program and have used it on myself and five other lifters that were all training for their very first meets.

We all PR'd – me at a bodyweight that was 30 pounds lighter than the last time I lifted competitively. This program is simple, to the point, and ready to use.

Getting Off On The Right Foot

Before you start, I strongly encourage you to hire a good lifting coach to evaluate your movements. You don't want to be wasting energy off the floor or in the second pull – a good coach can quickly identify this and help correct it.

That said, the Olympic lifts aren't difficult to learn – I can teach a group of athletes how to Olympic lift in just a couple sessions. What I'm talking about is becoming good at the Olympic lifts, as opposed to that meathead in the gym who reverse curls the weight to his chest and then muscles it overhead.

Your typical reverse curler may have the muscle mass and power to Olympic lift, but it takes more than 3 sets of 3 once a week to be legitimately good at the lifts. The Olympic lifts respond to efficient patterns just as well as they respond to big ass traps and huge quads.

The ideology at work here mirrors that of legendary Soviet weighlifting coach AS Medvedev. In his book, A Program of Multi-Year Training in Weightlifting, Medvedev outlines every lift used over the course of six years to take a weightlifter from novice to elite level. Much of the first two years is done with imitation lifts, no more than 50% of bodyweight, with technical efficiency as the only goal.

I'm not going to make you spend two years or even 20 weeks working with a bar, but this program is based on the idea of movement efficiency and developing technical patterns to improve at the lifts.

The program is as simple as it gets, 4 lifts per day with 1 complex before training. That's it. The program only has the lifts you need to be doing to get better at the Olympic lifts.

All of my athletes still do core work and corrective work, and I'm certain you'll need it, too. Throw this stuff in at the end or beginning of your training session, but don't overdo it.

Each day you'll begin with an "imitation complex," during which you'll only think about complete technical efficiency. No wasted thoughts of a "big pull" or worries about whether you can come up with the front squat or overhead squat.

In these complexes your goal should be to imitate the best lift you can picture in your head. You should use just the bar for at least one set and then go up to a maximum of 50% of bodyweight for any additional sets, so for a 200-pound guy that would be 100 pounds, max.

Remember, this isn't about getting strong; this is about learning to do the lifts the right way. As you do these complexes, imagine the best Olympic lifter in the world walking in at the end of your third set. If you'd be embarrassed by how badly your form has deteriorated, then you need to go down in weight.

The imitation complex for the snatch and clean are below:

This complex could be adapted to suit your individual needs – it doesn't always have to start at the mid-shin level – though most lifters have difficulty moving around the knee. This complex ensures that you're comfortable off the floor and around the knee.

Here's a video of me doing the snatch complex before a workout. It's just the bar, and it isn't easy.

When using the power variations, for the ones that you catch "high" or in the quarter squat, your focus will be on developing an efficient second pull. These lifts produce massive amounts of power and bar speed, as you must catch them in the high position.

The positional movements work on different phases of the lifts and transitions of your Olympic lifts.

Be sure to choose your positional lifts based on the areas that need the most attention. The area that gives most people trouble is the phase where the bar passes the knees, or even at the highest position of the second pull (the power position).

If you know you have an area where you struggle, then focus more on positional work get the kinks worked out. You'll have plenty of time to work from the floor later in the program.

The second lift in the program is one of the full, competition-style Olympic lifts. You'll pull from the floor and receive the bar in the low squat position. When using the clean you should finish with a jerk.

If you have difficulty receiving the bar in the low squat position, then break these lifts down to combination lifts: a power clean + front squat or a power snatch + overhead squat.

As you get more comfortable a couple weeks into the program, start working to receive the bar as low as you can and ride the weight down to the bottom position.

The video below shows an easy progression from complete combination lift, to riding the bar down, to an actual low receiving position.

When it comes to getting stronger at the Olympic lifts, partial lifts are the way to go. Unfortunately, like all Jason Statham movies, these lifts are under-appreciated. Partial lifts (the snatch and clean pull) allow you to overload the lifts without increasing the impact on your body.

Rather than finish in the racked position, you'll finish with arms extended down and in full hip extension. These lifts can be done with up to 110% of your rep-max for whatever rep scheme you're doing. So if your 3-rep max is 200 pounds in the snatch, then you can use up to 220 pounds for a 3-rep snatch pull.

Becoming more efficient in the movements of the clean and snatch is one thing, but we need to get stronger, too. Having great technique in the lifts is cool but it doesn't mean much if you still get buried in the hole.

Alternate your strength work between back squats, front squats, Romanian deadlifts, and presses. You still need to be squatting once a week – twice per week isn't necessary, and if you still have energy, do some extra pressing. You can also do jerks from the rack to develop your technique in this area as well, especially if your aching legs need a break.

I don't like rigid programs and most lifters don't want to train that way, either. This program is no different; the actual movements should change based on your needs as a lifter.

If you're rock solid in the clean and jerk but need a lot of help with your snatch, then don't spend your time improving by miniscule percentile points in the jerk. Do some damn snatches and put something respectable over your head.

If this is the case, three out of every four days should be a snatch day. If both lifts need work then just alternate days that you snatch and clean.

The rep scheme, however, is more rigid (hey, we gotta live with some rules right?). All days should look very similar in terms of repetitions. You'll still need to vary the movements on each day though.

The specific loads aren't something I program, but here's my rules for any given rep scheme on any given day, and one that applies really well for the Olympic lifts:

Here's an idea of how you can vary the movements over the course of 4 weeks using a simple undulating periodization. This program would be perfect for someone with familiarity with both lifts and some decent overall strength numbers.

In week 5 you should pick two days to work up to a heavy single in both the snatch and the clean and jerk. Use these numbers to base your workouts for another 4 weeks.

This program can be repeated immediately after you complete it the first time and you'll continue to see gains, so long as you select the movements that will help you improve the most.

Improvement with the Olympic lifts isn't simply about strength – if it were, then every man wearing Zubaz pants would've just returned from a triumphant performance at the Olympics in London.

These movements are also about being efficient in the movements – meaning you first need to learn them well, and then focus on improving how well you perform them through repetition.

Get a coach to critique your lifts, try this program, and dominate the platform. 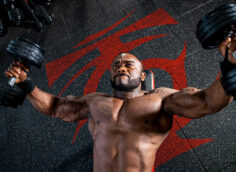 Big Dave Tate is a powerlifting icon and a successful businessman. He's also the least politically correct man in weightlifting and always a sure bet to scorch somebody's eardrums.
Training
Nate Green April 3

If you want great abs that also bulletproof your body against injury, you have to go deep. Try these three moves.
Abs, Tips, Training
Tessa Gurley August 4