In Mythbusters Volume 1, we let our expert panel tee off on some of the fitness industry’s most insidious myths, debunking the ones that piss them off the most.

Now we’re back with more myths, and a (mostly) new lineup of eminent fitness professionals eager to set the record straight on the topics they care most about.

Those are their personal opinions, and that’s fine. But I think a lot of readers have gotten the wrong idea, and now think box squats are inherently dangerous. I’m starting to hear comments like, “Heavy box squats will mess up your back.” That’s just plain wrong.

It reminds me of going to the doctor’s office and being told not to squat because it’s bad for your knees. The problem is that doctors don’t know how to squat, and assume no one else does, either. Try to do a sissy squat with weight on your back, and of course you’re going to mess up your knees.

Same with the box squat: If you slam back on top of the box and then bounce off it, of course you’re going to hurt yourself. But that’s not a box squat. That’s being an idiot.

The other statement that pisses me off is, “The box squat needs to be coached.” Well, no shit! Every exercise needs to be coached! Every time I walk into a gym, 90 percent of the people who’re benching aren’t doing it correctly. So is benching a bad exercise? Do it wrong and you can mess up your shoulders or elbows. I don’t see why we have this huge contradiction. 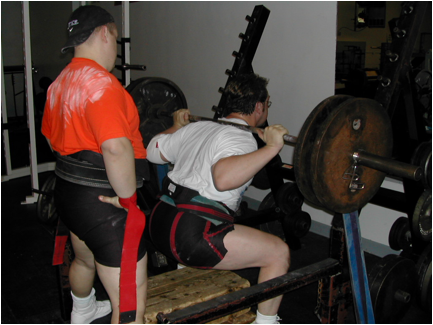 I trained at Westside for 12 years, and every Friday we did box squats. The only free squats we ever did were in competition. And you know what? Not one fucking time did I ever see a single person throw his back out by doing box squats. Not once! But I did see guys hurting themselves bench pressing, deadlifting, and doing pin pulls and other popular exercises.

Let me add that I respect strength coaches who have the ability to train athletes, something I don’t know how to do. I train lifters. Give those guys an athlete and they’ll kick my ass. But give me somebody who wants to squat more and I’ll kick their ass. Guaranteed.

Myth: Squats and deadlifts are all you need to work your core.

If you look at how the body works, I think any reasonable person would see it’s nearly impossible to work the core well enough with exercises like squats and deadlifts. Sure, you could develop the ability to hold heavy loads in place, but it wouldn’t transfer over to everyday life, where you have to stabilize your core in a variety of motions.

Those movements change the mechanics of your pelvis completely.

Let’s say you have your right foot on the ground, with your left foot stepping forward. Your pelvis is stabilized by your adductors on the inside of your right leg, your gluteus medius on the outside of that leg, and your quadratus lumborum on the left side of your lower back. These all work in unison to keep your pelvis level. It’s entirely different when both feet are fixed on the ground and parallel to each other.

And while adding unilateral movements to your training is a step in the right direction, I still think you need some isolation work for your core.

Let’s look at it in a different context. Some guys say you don’t need to do direct biceps work if you’re already doing chin-ups. But I don’t think you’ll find many bodybuilders who agree with that. They’d say you have to isolate your biceps with specialized exercises, in this case curl variations, and they’d be correct.

Same goes for the core. I think you need to isolate those muscles, as long as it’s the right kind of isolation, like planks and ab-wheel rollouts.

So, getting back to the myth, pulling a lot of weight off the floor, or putting it on your back, will certainly develop functional strength. But it only applies to your ability to support that load in a bilateral stance. If your goal is to put those muscles in motion, you need to do more than squats and deadlifts.

(For more on myths about isolation exercises, keep reading.)

A lot of coaches these days will look at somebody’s static posture and come to immediate conclusions about his ability to function. They’ll look at a guy and say, “He has rounded shoulders and his hands are slightly pronated, so he probably has tight pecs and weak rhomboids.” If asked, they’ll come up with a program on the spot to fix these problems.

But not every variation in posture is a sign of dysfunction. We get into trouble when we assume posture inhibits performance before we know what that performance is.

Let me give you an example. If you’ve ever watched the Olympics, you’ve seen the gymnasts bust out some amazing feats of strength and mobility, like the iron cross. When they dismount and hit their landing, they’re always standing perfectly straight.

Then you watch them sit down to wait for their scores, or stand with their teammates, and you see a lot of them hunch over and exhibit horrible posture. Realistically, you can’t watch those guys and say their horrible posture is evidence of a dysfunction that inhibits their performance. The way they stand or sit is just a variation of normal.

Not everyone has to fit the mold of what’s “optimal.” It’s much more important to look at whether or not they’re performing well, and if they’re able to do it without pain.

Myth: If you’re not adding reps or weight to the bar, you’re not progressing.

But when it comes to strength training, you skip most of that, and go straight from learning the mechanics – how to hold a barbell or dumbbells; how to complete a repetition – to playing songs. You learn about sets and reps, and how to add weight to the bar, without learning to create specific effects from those sets and reps, or to understand what feedback you should expect from your muscles, and what it means.

It’s like trying to make music before you know how to make notes. You can’t play a song until you can play the scales.

To me, the “scales” of strength training are lactic-acid buildup, oxygen debt, fatigue, and performance. If you don’t know how to induce and interpret these types of feedback, it doesn’t matter how many reps you did, or how much weight you used. You’re just lifting iron, and your muscles and mind aren’t connected at all.

Once you learn those basics, you’re still a long way from building your body, just as an aspiring violinist who can play scales is a long way from being able to produce beautiful music. But at least you know how and why your body reacts to different stimuli. From there, you can develop a comprehensive program that meets your needs and helps you reach your goals.

In other words, there’s a lot more to training than counting reps and throwing iron on the bar. Once you start experiencing your workouts, instead of simply doing them, you’ll progress exponentially, rather than incrementally.

Myth: You should never do static stretches before weight training.

Early in my training career, whenever we sent one of our athletes to physical therapy, we were told he needed to stretch more. We eventually conceded the point, and added pre-workout static stretching. Almost immediately, we saw a significant drop in long-term injuries.

So imagine how strange it was to see my fellow coaches turn against pre-workout stretching in recent years. Why? Because research linked static stretching to a decrease in power.

I don’t know about you, but I’d rather be injury-free than worry about an incredibly small decrease in immediate power.

Frankly, I never found those studies particularly compelling. I remember one where the researchers had their subjects perform a vertical jump, follow that with a standing hamstring stretch for 30 seconds, and then head back to do another vertical jump. The overall decrease in power in that study was something in the neighborhood of 3 percent. Not 30 percent. Three. There’s a difference between something being statistically significant and genuinely important.

In another, more recent study, you’ll see that static stretching didn’t lead to a decrease in height for the vertical jump, a favorite marker of power.

I agree that static stretching will probably decrease power immediately after stretching. So if I’m working with a sprinter, I’m not going to have him do static stretches right before he runs 100 meters with a championship on the line. But I might tell him to do it an hour before the race.

That way I know I’m doing the best I can to keep him injury-free for future races.

Isolation exercises get no love. I’m surprised every time I hear trainers say you shouldn’t do biceps curls or calf raises because they aren’t “functional.” I don’t know what definition of “functional” they’re using, but it’s clearly different from mine.

Let me offer some examples.

Imagine a wrestler trying to flip his opponent, or a football player cradling the ball and pushing through traffic. Of course those guys need total-body strength, and of course they need trunk stabilization. But they also need to be really good at holding something in front of their bodies.

If you talk to an MMA guy about his sport-specific training needs, one of the first things he’ll say is that his arms completely burn out from all the pulling and pushing. So why shouldn’t we have him do some curls? Why wouldn’t the football player, who needs to protect the football when bigger and stronger players are trying to rip it away, do isolation exercises that are specific to the situations he’ll encounter on the field?

Are the curls a priority before heavy chin-ups or push presses? Absolutely not. But we’re certainly not going to neglect them. It’s not either-or. We can do both types of exercises within a well-designed training program.

If your calves are weak, relative to your hamstrings and hips, you won’t be able to reach top speed. So if one of the goals of your training is to run as fast as possible, and your calves are the weak link in the movement chain, of course you’ll need to focus on them. They need to function at the same high level as your hams and glutes.

Why wouldn’t you add a few sets of calf raises to your workouts?

Now imagine if you strained your calf. Not only could you not run fast, you’d barely be able to walk.

Any physical therapist worth his paycheck would say that a successful rehab program starts by building motor control in a muscle. How? By isolating it. Once you’ve taught your calves how to work, they’ll eventually “wake up,” and learn to work even harder on major compound exercises like deadlifts.

So there you have three reasons to include isolation exercises in a training program:

Maybe it’s just me, but these seem more compelling than the reasons for avoiding isolation exercises altogether.