The year was 2001. It was a Sunday morning and I'd just finished bench pressing. I felt like crap – another bad bench workout, and it was pissing me off.

I was sick and tired of being awful. Tired of having a shitty bench press. Sick of being weak.

I tried to figure out what I needed to do. Was it my programming? Technique? A "magic" assistance exercise that I wasn't already doing?

I decided right there that I would no longer listen to or read anything on training. I already knew enough to figure out my problem – acquiring more random training "knowledge" wasn't going to help me. I needed to rely on my gut and my experience, and certainly not any trends.

I had to start by being brutally honest with myself and realize that I was plain weak.

Weak everywhere. Everything needed to get stronger. Weak Point Training, while good in theory, suggests that you have "strong points." I'm sorry, but few people with such glaring holes can really classify themselves as strong, period.

So I resolved to make everything strong. Quads, hamstrings, abs, low back, shoulders, triceps – you name it.

For the shoulders, I decided that until I pressed 500 pounds for 8 good reps, I was weak. With that goal I had a lot of work to do.

So every Sunday morning after I bench pressed, I did five sets of 10 reps on the press. I didn't use a machine. I didn't sit on a bench and turn it into an incline. I did them standing with a barbell.

I started with 95 pounds. Pathetic. Keep in mind that at the time, I was bench-pressing 410 pounds.

After two months of steady pressing, my bench rose to 440. One month later, it rose to 455.

I fell in love with the press, first because of the effect on my bench press. Now it's no longer a means to an end, but the end itself. The press has become a mainstay in my training program and easily my favorite upper body lift.

Maybe because it's still relatively new? We all like the new piece of ass better, right? Still, there's something incredibly primal about the press.

Here are some things that have helped me increase my press from the paltry sets at 95 pounds to doing 300.

If your body wilts when you take the bar off the rack, your press will follow suit. This isn't groundbreaking but it bears repeating.

Before each set, I grab the bar at the appropriate width and grind my hands into the knurling. I take in short breaths and start to stabilize my torso. As I get under the bar I make sure my lats and upper back are very tight and pulled (somewhat) together.

The key to taking the bar off the rack and a quality starting position is using the lats as a shelf. This means that you shouldn't support the bar with just your arms and shoulders, but also the lats. This ensures that the bar path stays close to the body, not arched out in front.

The only problem that I've run into with keeping your air is getting too dizzy. The solution is simple – learn how to flex, stabilize, and hold your body without taking so much air. One thing that can help is taking the breath in with your nose, not your mouth.

As noted in my press revelation above, I did five sets of 10 reps with my initial press training and it helped quite a bit. If you're a beginner and have a very weak press, this is crucial. I still recommend a good base program with heavier, progressive weights, but don't be afraid to do a lot of volume after the main training.

There isn't much rhyme or reason other than you know for sure you're getting enough work in. Plus, you get an awesome pump.

You don't have to just do the standing press as your main assistance exercise – you can use the incline press, high incline press, log press, or the football bar press. Dumbbell pressing can also be used.

Don't be stressed out about recovery either. Just eat more.

The push-press is often used as an assistance exercise to help the press. I can't give the exercise the Wendler Seal of Approval, mostly because it did nothing for me other than help my push-press.

I know people love this exercise but it's probably because they can handle more weight; the same reason people do rack pulls over deadlifts; rack pulls above the knee. And bouncy shrugs. (Those are the most fun to watch.)

The push-press is a pretty awesome exercise, but helping your press isn't something you're going to sell me on.

You can't deny results though, so if you feel like your press needs a kick in the ass, a little leg drive might be in store for you.

Strength training experts have dealt a huge blow to the press in recent years. It's been demonized as being the culprit of all upper body injuries. The one thing that bothers me is this: everyone with shoulder problems bench presses, but few press.

It's like being attacked by one person and then punching another in retaliation. That kind of logic might work in New Jersey, but in the gym it doesn't make sense.

You can't say an exercise is bad if you don't do it correctly. Any exercise done incorrectly is bad – so that's a poor excuse to shit on an exercise. Go read Starting Strength by Mark Rippetoe. The third edition of the book is out and if you don't already own it, get it. You'll learn the press and get an overwhelming tutorial on the squat, deadlift, clean, and bench press.

99% of the questions I get asked are (sadly) about assistance work, so here are some of the exercises that help your press:

I was introduced to the false grip for pressing by Jim Smith. After switching to this grip, my press felt more comfortable and the bar seemed to track better overhead. Now if you're a pressing novice or lacking coordination this grip isn't for you, but it might be the trick that takes your press to the next level.

I fell into this trap for a while and had to be called out by my training partners. My press was going up but it was at the expense of bad form, namely a little leg drive at the bottom of the lift. Not enough to call the lift a push-press, but enough to not be called a press. After having them call me out and seeing a video, I started from square one.

The point is this – do it right the first time.

One thing I do before every set is tell myself to be "tight and strong." What this does is remind me to keep my legs (knees), abs, and lats tight and be strong off the bottom of the lift. And by "strong" I mean "aggressive." I see too many videos of people wimping weights up in the name of good form. Save that shit for the functional crowd.

The press is slow to improve, much more so than any lower body lift and slower than the bench press. This can be frustrating for the lifter and cause them to give up. Welcome to the world of weight training. Increases are not linear and there are setbacks.

Strong people persevere in life and in the weight room. Get stronger. Be patient. You aren't going to get any sympathy from veterans.

Maybe Mark Rippetoe said it best: "When you press a barbell overhead, you celebrate the spirit of weight training." I agree. Seven weeks after having shoulder surgery this past January, I pressed 135 for 10 reps. I can honestly say that this might be the most satisfying lift I've done.

They can be a great tool for athletes and gym rats, as long as you know how to use them... and when to avoid them.
Powerlifting & Strength, Training
Nick Tumminello August 13 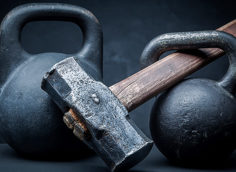 Got a bench, a rack, a bar, and a mountain of plates? Awesome. Now it's time to have some fun.
Training
Christian Thibaudeau October 19

The look of a tiny waist and big-back is what makes heads turn. Build your upper body to achieve that look. Here's how.
Bodybuilding, Training
Mark Young March 18