I'm a sucker for metabolic stress. If, after a workout, I'm not short of breath, don't feel sweat trickling down my temples, don't sizzle from a lactic acid burn, or exult in the glory of a pump, I get the workout equivalent of blue balls.

Just like real blue balls, it's not dangerous, but I'm a little cranky until I find sweet release. So, load me up with work, please. Let my spirit animal – a mutant crossbreeding between a mule and a beaver – shine.

It's got a couple of things going for it. One, it's among the most time-efficient methods around, and two, it's got some solid research to back up its muscle-building and muscle-strengthening credentials.

The short intervals used in the 3/7 method are thought to induce a greater amount of cumulative fatigue-related metabolites like lactate, hydrogen ions, and inorganic phosphate.

Sound vaguely familiar? It's exactly the mechanism ascribed to the success of blood-flow restriction training (when you wrap elastic bands around a muscle before doing a set).

The incremental organization of the reps within each set are also thought to play a part in inducing a greater accumulation of metabolites, particularly by the 5th set (of the first "round" of reps), the 10th set (at the end of the second round), and the 15th set (which you hit at the end of the third round, assuming you haven't already hit failure).

All this metabolic stress then initiates the anabolic signaling that leads to muscle hypertrophy.

There have only been two studies conducted using the 3/7 method (the first of which was chosen as a finalist for "Paper of the Year" at the American College of Sports Medicine's annual meeting), but both showed compelling results.

While the 3/7 group didn't "win" the competition, it still showed pretty strong results. Bear in mind, too, that this study only used one round of 3/7 training instead of the 3 rounds initially proposed by Emmanuel Legeard when he devised the method.

Forty-three untrained subjects, divided into two groups, trained machine biceps curls twice a week for 12 weeks. However, unlike the Laurent study described above, the subjects in this study did two rounds of 3/7 training instead of one.

As in the Laurent study, both groups used training weights approximating 70% of their 1RM.

This time, 3/7 came up on top. It resulted in 75% greater biceps growth and 83% greater strength gains than the 8x6 protocol, probably because of the additional round of metabolic stress induced by using a second round of 3/7 training.

The studies are fairly compelling, but you might have noticed that they didn't use experienced weight trainers. That sours the results a bit because, well, you could train newbies with Campbell's soup cans and then progress them to using Progresso Rich and Hearty soup cans, and even that amount of anemic training would result in some significant gains in strength and hypertrophy.

Still, the hypothesis behind this kind of metabolic stress training appears sound. It could very well work in experienced trainees, particularly if they do three rounds of the 3/7 method (for a total of close to 75 reps!) instead of the one or two used in the studies.

One distinct advantage of the 3/7 method that you might not have considered is time efficiency. One round of 3/7 training takes somewhere between 2 and 3 minutes, whereas doing 8 sets of 6 would probably take around 20 minutes.

Of course, adding additional rounds of 3/7 training would add to that 2 or 3-minute total, but it still makes for a pretty quick workout.

If you want to take 3/7 training out for a spin, respect these critical points:

And while the studies on the 3/7 method only used two exercises (smith machine bench presses and machine biceps curls), there's no apparent reason it shouldn't work well with any body part or any conventional exercise, with the possible exception of nut busters like squats or deadlifts.

Here's a simple drill that'll make your back and lower body feel better and even boost your squat numbers.
It Hurts Fix It, Tips, Training
Max Shank January 21

Got calves? Probably not. That's because you have to work them every day to get them to grow.
Bodybuilding, Calves, Training
John Meadows November 12 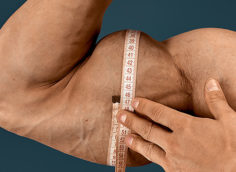