Well okay, maybe that's how they used to do it. Besides, we already wrote about old-school training methods here. That article focused on breathing squats, in which you'd do a 20-rep set of squats using a weight you could lift just 10 times. You keep going past 10 by taking deep breaths between reps.

It worked for hardgainers in the '30s, '40s, and '50s – Mark Berry claims to have packed on 29 pounds in a month using high-rep squats, and J.C. Hise says he put on 75 pounds in two years – and I'm sure it would work for hardgainers today. Randall Strossen's book, Super Squats: How to Gain 30 Pounds of Muscle in 6 Weeks, came out in 1989 and introduced a new generation of lifters to the pain and progress of Berry and Hise's original plan.

But just because it's one intense and effective way to pack on slabs of thigh muscle using high reps doesn't mean it's the only way to do it.

In fact, an intriguing study published in 2004 suggests that a combination of low- and high-rep training is better than one or the other method for making size and strength gains.

So let's talk about why higher reps can work for hypertrophy, and then show you a new program from veteran strength coach Jason Ferruggia, author of Fit to Fight, to help you make major gains and turn you into the baddest muff in the gym.

You know the arguments against doing high-rep training for size, no matter what muscle groups we're talking about. Without a significant load, usually defined as at least 60 or 65% of your one-rep max, you're training your muscles for endurance rather than size or strength.

Look at athletes who do a lot of reps of anything, and you rarely see a lot of size in the muscles that do the high-rep work – unless it's size that was built in the weight room with heavy loads.

(Please don't mention cyclists as an exception unless you've seen them in the gym. Well-trained pro cyclists lift shitloads of iron, and even then their thighs are often big only when compared to their relatively underdeveloped upper bodies.)

Even the old-school breathing squats employed a 10RM weight, which is usually about 75% of 1RM – enough to build size, if not necessarily strength in advanced lifters.

Most popular size-building plans since the 1950s have advocated lower reps for size, including Bill Starr's famous 5 x 5 training based on the "big three" lifts (bench press, squat, power clean), and our own Chad Waterbury's 10 x 3 programs.

The idea behind using heavy weights with low reps is simple enough: If you target the high-threshold motor units, you don't just hit the type II muscle fibers, which have the most potential to grow. You also hit the type I fibers, which offer limited size potential but have to come along for the ride, thanks to a well-known physiological phenomenon called the size principle.

But a study published in the Journal of Strength and Conditioning Research makes a compelling argument for a mix-and-match approach.

The Japanese researchers had a group of 16 male lifters do conventional hypertrophy training for six weeks, then divided them into two groups. Some did straight-ahead strength work – five sets of each exercise, using 90% of their 1RM. (That would translate to three to five reps per set.) The others did the same thing, plus a final set of 25 to 35 reps using 40 to 50% of their 1RM.

The second group made slightly better gains in size over the next four weeks (which, frankly, were unimpressive across the board – not surprising, considering there was no nutritional intervention in the study), but the big surprise is that they made bigger increases in strength.

So, even though the average T Nation reader would choke on his cookie dough-flavored Metabolic Drive bar at the thought of training 10 weeks with only negligible muscle gains to show for it, the study suggests one compelling take-away message: Those light-weight, high-rep sets following heavy-weight, low-rep sets do something. Whether they do it because they flush the muscles with nutrient-rich blood, or switch on some kind of unknown metabolic pathway, or simply add volume for its own sake is a mystery.

But as long as there's some apparent benefit, who really cares about the cause?

The squat, for good reason, is the classic choice for using high reps to build huge muscles. That's why you never heard the old-school guys talk about "breathing leg extensions," and why Randall Strossen's book wasn't called Super Lunges.

Even if you stick with squats, there's no rule that says you have to use back squats. Front squats would make it more challenging, and maybe offer more of a core-strengthening benefit. (I'd suggest holding the bar with the crossed-arm bodybuilder grip, rather than using the Olympic clean grip. That's a lot of time to spend with your wrists in the rack position.)

Avoid overhead squats (too much shoulder and arm fatigue, and too much stress on the lower back) or Zercher squats (unless you have the pain tolerance of John Rambo).

Deadlifts are another animal entirely. Longtime T Nation contributor Mike Mahler, who's researched high-rep lifting routines (and wrote the article about high-rep squats I linked to earlier), thinks they can work, with some precautions.

"Similar to high-rep heavy squats, high-rep heavy deadlift training is beneficial, but I think a trap bar is the way to go," Mahler suggests. "There's definitely an increased risk for injury, so a high-rep program isn't for beginners. You need to have solid deadlift form and not compromise technique to get a rep. Rather than just banging out 20 reps nonstop, park the weight after each rep, stand up and take a few deep breaths, then reset for the next rep."

Ferruggia adds this suggestion about high-rep deads: "I'd caution against using an over-under grip, because that places the biceps under a lot of stress for a lot of time." Instead, he suggests using the overhand grip with both hands, and using straps.

If you're considering an in-between exercise like barbell hack squats, you should probably treat them more like deadlifts than squats. Once you hit your max on continuous reps, put the weight down between reps while you take deep breaths.

If you think you're ready to sack up and use high-rep training to put some meat on your drumsticks, keep these three points in mind:

1. It's harder than you think

No matter how hard you think it's going to be, you really have no idea until you try it. My informal research suggests that 10 out of 10 lifters who try high-rep leg training want to quit before the end of the first workout.

It's a mind game, you against your instinct for self-preservation. Don't let sensible thoughts intrude. Be purposefully stupid and push through the pain, as long as it's muscular pain, and not your spinal discs coming apart like Lincoln Logs.

The classic 20-rep squat programs placed a huge emphasis on deep breathing. Personally, I subscribe to the theory that you've been breathing for quite some time all by yourself, and you're probably pretty good at it. I think you can be trusted to handle the whole air-in-the-lungs thing without some muscle nanny detailing the finer points.

That said, when you're pushing into uncharted lands of post-failure exertion, you really do want to take at least two or three big breaths. It's the only "rest" you get in the middle of the set, so you need to make the most of it.

There's a reason they used to call this the "squats and milk" program. The goal is to make your thighs bovine – big and meaty. It's not for cutting. It's not something you do in the middle of baseball season. There's no functional benefit here. Size is the one and only goal.

To achieve that size, you need a lot more calories than usual. Whole milk was fine before the advent of potent supplements, the same way a horse and buggy was fine before we invented Lamborghinis. You'd be nuts not to take advantage of these new formulations. These are the minimum essentials:

This total leg routine from Jason Ferruggia can replace your current leg training. It's designed to be done once per week, and covers every base for maximum size and strength.

AMRAP = as many reps as possible

The goal of this program is obvious enough: Gain a lot of size, and gain it fast.

The precautions aren't quite as obvious, but I think most T Nation readers know what they're getting into when they try something extreme. It's hard. It hurts. It's incompatible with performance-related training. It's not for the newbie, and it's not for the guy who's cutting calories to get that summertime six-pack.

You'll need a brass-filled nutsack to do the program, and a lot of food and supplements to get the most out of it – none of which are deal breakers for most of you.

So the real caution concerns your health, particularly your lower-back health. Your back extensors are going to get fried, and your core muscles are going to sue you in federal court for violation of muscle-labor laws. If those muscles quit on you, your back is vulnerable to injury.

But that's why this program is for experienced lifters only. You have to know what your back feels like when your lumbar spine is in a safe, neutral position, and no matter how tired you get, you have to be cognizant of any changes to that position. If you don't think you can do another rep safely, you have to back off.

That said, some of the giants of the iron game have used high-rep leg training safely and effectively for many years, and if you have the nads for it, I highly recommend giving it a shot. If nothing else, you'll realize what a serious workout is supposed to feel like. 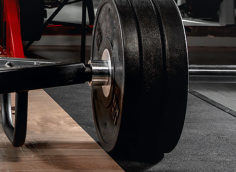