Your mother was right. You are a unique snowflake. But were you aware that she might have been talking about how you squat, deadlift, and overhead press?

There's a popular perception that every single human being (but especially you) should automatically be able to squat past parallel, deadlift from the floor, and press overhead. The underlying belief is that these movements are performed by the mightiest of humans and that if you want to work towards being the mightiest of humans, you should do them. This is largely correct. The key words here are work towards.

Start with the Squat

For those who've moved beyond the fear that both kneecaps will simultaneously explode once they pass 90 degrees, squatting below parallel is considered to be the gold standard for range of motion. After all, anybody can throw three or four plates on the bar and dip their knees a couple of times. Squatting past parallel (where the top of your hip pass the tops of your knees) has become the benchmark for depth and consistency. Consistency is good.

Should you be barbell squatting past parallel? That's a fine question. And if the many weekend warriors I've seen are any indication, the answer is not quite yet.

Just because you can get from Point A to Point B doesn't mean that you can do it well. And doing it well means meeting a few criteria consistently because, lest we forget, consistency is good. 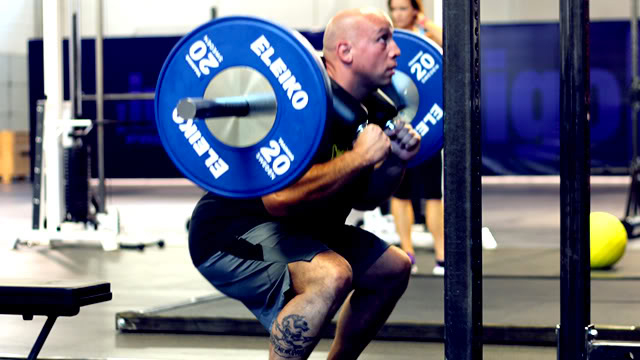 Standing with good posture in a quiet room is kind of like meditating in a quiet meadow; anyone can be tranquil in the middle of a big, stupid meadow.

Keeping a neutral spine in the presence of movement is the real challenge, kind of like remaining tranquil in a traffic jam or a four-alarm fire.

How deep can you squat with a neutral spine? The easiest way to find out is to get a friend to put their hand on your lower back when you squat (keep it light and slow). It's easy to tell if there's any change in the low back alignment because, quite simply, things will move.

If things do move, stop there. That will give you a benchmark. If you didn't make it to parallel, you'll probably be a bit disappointed and want to retest. So retest. Play around with your foot width, the external load, and anything else you can think of. And when you're done, be honest about how deeply you can squat with a neutral spine.

In this context, having a fixed point refers to preventing your weight from shifting around while moving. It's during the descent that this tends to be problematic. If you find that your weight is shifting forward during a squat (say, from your heel toward the front of your foot) or that it's shifting inwardly (from the outside edge to the inside edge of your foot), stop moving as soon as you notice. Attempt to restore your position and stand back up. Both issues are common.

Where should your weight be? Some people will tell you the heel, others will tell you the mid-foot. Some maniac out there might even tell you the ball of the foot. Nobody will tell you that it should fall inward. With that in mind, all will be well if you keep it in the same spot and emphasize the lateral edge by trying to "spread the floor."

The odds are that nobody is paying you to lift weights. It's something you do out of enjoyment or to facilitate other things that are important to you. Joint pain isn't something you need to suck up; it's something that you need to avoid by limiting yourself to what you can do well (and without repercussions).

This approach is the best way to keep training in the long term. Respect this process and you'll not only improve, you'll get steadily closer to performing these lifts the way that you want to.

It's more important to have full range of motion than it is to squat heavy. In that regard, I'd recommend taking weight away until you're able to get a full range of motion flawlessly. Dan John has done a great deal to popularize the goblet squat. It's been my experience that using a light counterweight in this manner actually makes it easier to squat with good form. You (and by you, I mean everyone) should experiment with this, too.

If any amount of weight breaks your form, then go backwards and take weight away.

At the end of the day, make things as easy as you need to in order to get to the bottom of the squat, and then build upward from there. With a little luck, it will be a steady climb.

Moving to the Deadlift

You knew that the squat was going to have to take one for the team. What about the deadlift, though? Surely I won't malign this noble beast.

The need to keep a neutral spine doesn't diminish when it comes to the deadlift, however, not everyone can maintain a neutral spine in the pick-up position. To see if you can, use the same test as above to determine whether there's any movement in your low-back. If you're using an empty bar, remember that it only needs to go as low as it might with large plates on, not to the floor.

Again, there isn't much room for debate here. You can either keep a neutral spine or you can't. So what if you can't?

One of the most important aspects of the deadlift is picking the bar up from a dead stop on the ground. Since we don't want to miss out on this process, we're going to bring the ground to us. Elevate the pick-up point by either setting the pins at a higher position in a power rack or by using boxes/aerobic steps. 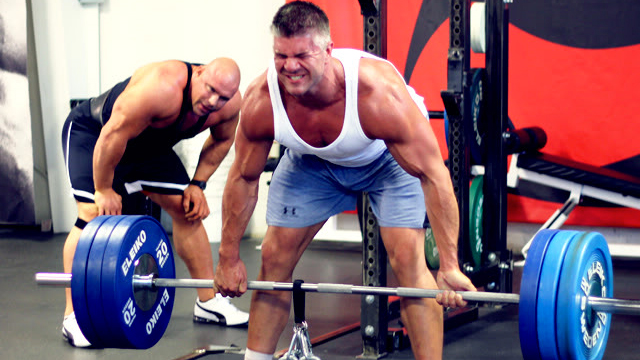 "Do I have to keep a neutral spine, maintain a fixed point, and remain pain-free just like in the squat?"

You sure as shit do.

One of the nice things about limiting your range of motion in a deadlift is that you can generally manage heavier weights. My advice is to use a double-progression, starting with the lowest position you can manage with good form.

* when you reach 8-10 quality reps with this weight, lower the pick-up position by three inches (and so on).

If you find that a three-inch change is too much to manage, take smaller steps, always keeping quality movement as your priority. You can supplement this process by way of single-leg deadlifts with less weight and a full range of motion.

And Finally, the Overhead Press

Depending on whom you ask, overhead pressing is either one step short of magic or a kind of bad medicine that will irrevocably end in impingement, a torn supraspinatus, and addiction to crack cocaine.

What you may not know is that overhead pressing began to fall out of favor long before the current trends toward injury-prevention and functional training. Strength legend Bill Starr has written on some of the politics that got it yanked from Olympic lifting competitions in the early 70s. He feels that the lack of quality overhead pressing today is simply because people don't do very much overhead pressing at all.

I can tell you that the status quo for posture is markedly worse than it was 40 years ago and that even elite-level lifters are seeing an increase in shoulder injuries as time goes by. The question is, would more lifters pressing overhead from a younger age have mitigated this issue? If I were a teacher, I'd ask you to go home and research this to cover up the fact that I don't know. 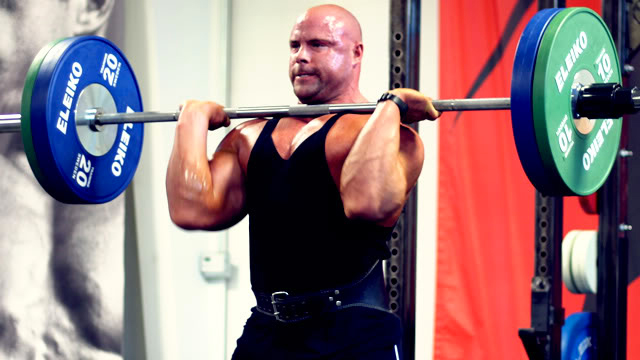 If you're unable to pass the wall test above, use a high-incline dumbbell press instead. Adjust the angle to correspond to your legitimate range of motion (with a slight buffer added on).

This variation will allow you to work as close to overhead as your body can reasonably take. Moving forward, however, won't be as simple as using the type of double-progression I've suggested for the deadlift. So what's the game-plan?

Improving mobility in an overhead position is something that every desk jockey should be after. If your immediate reaction is to start stretching, however, choke it back down. Focus instead on improving your seated posture and breathing diaphragmatically. Additional improvements will come from soft-tissue work and drills found in Long Live the Overhead Press.

Once you can pass the wall test, drop your weights significantly and begin to build your overhead press from scratch.

If you choose to employ the lifts we've discussed, ensure that you're working within your own limits, whatever they may be. This simple, pragmatic approach will allow you to sidestep many of the issues that might otherwise sideline you. This way, you'll be able to make continued progress toward becoming the mightiest of humans, whether you're starting near the top of the strength mountain or merely comparing yourself to the guys you carpool with.

A program designed to improve your vertical jump and your overall strength and athleticism. Check it out.
Deadlift, Powerlifting & Strength, Squat, Training
Christian Thibaudeau December 22

Think of this as a whole-body pushing exercise. It'll even nail your core. Here's how to do it right.
Exercise Coaching, Push-Up, Tips
Nick Tumminello December 11

Just about everyone screws up this arm exercise. Here's what they're doing wrong, and how to do it right.
Tips, Training
Dr John Rusin December 4