Back in April, in an article called " How Not to Warm Up," I offered a simple way to decide if a training system is worth pursuing:

"If it doesn't make scientific sense, and defies common sense, then it must be nonsense."

I remind you of this because the technique I'm about to describe is the opposite of what I wrote about in the previous article. It makes scientific sense, and I think it'll mesh with your experience as well. In other words, once I explain it, there'll be no disconnect with common sense.

Best of all, you can integrate this technique into your program today, or whenever you next work out, and you'll soon enjoy the benefits: increased size and strength.

One of the fundamental concepts in muscle physiology is the length-tension relationship: how much force a muscle can generate relative to its length. As you can see in the chart below, muscles have the lowest potential to generate force when they're either fully elongated (stretched) or fully shortened (contracted). They generate the highest possible force in the middle – halfway through the range of motion.

The more force you generate in this midrange, the more motor units you recruit. (A motor unit is a nerve cell and the set of muscle fibers it's responsible for activating.) It's possible, if the load is heavy enough and you're making an all-out effort to lift it, to get virtually all your available motor units into action in the midrange, as shown in the following graph. 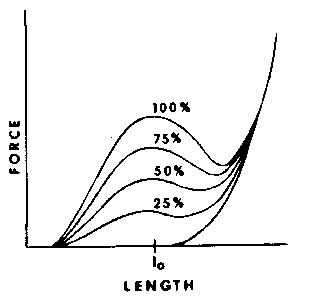 Now that we know muscles produce the most force in the midrange, where they also have the potential to activate the highest percentage of motor units, let's look at how we can exploit that to build size and strength.

Traditionally, when lifters talk about partial reps, they mean the final part of the range of motion – the top. Two common examples are quarter squats and rack deadlifts.

These exercises are great if you're a powerlifter working on your lockout, or if you just want the ego boost that comes from moving a weight you couldn't possibly lift through a full range.

They aren't, however, the best choices if you're looking to use partial reps to increase your size and strength. As the charts above show, the lockout is not where you're generating the most force, or activating the greatest percentage of motor units. For that, you need the midrange.

The beauty of this concept is that it can be applied to virtually any exercise. That said, at Performance University, my facility in Baltimore, we've found that some exercises work a lot better than others for midrange partials. These are the best of the best.

At 180 degrees, there's minimal tension on your quads, hamstrings, and glutes. Your goal here is to start the movement with some tension in those muscles, so your knees would be at an angle of 150 to 160 degrees. When you descend, you want to stop just short of a 90-degree angle.

Stay within that range of motion for all your reps.

Your elbow angles on the midrange dumbbell bench press will be about 135 degrees at the top and 90 degrees at the bottom. Expect a real burn on this one – we all depend on the stretch-shortening reflex at the bottom of each rep to generate momentum. Take that away, and you'll feel it.

Yes, the dork factor is off the charts here. You'll look like you're auditioning for a Planet of the Apes sequel. But you won't believe how hard your lower-body muscles have to work to walk without straightening your legs. The closest you'll get is about 150 degrees on the stride, with your knees at about 90 degrees on the descent.

You're going to rotate a medicine ball – or a dumbbell, or small child, or anything that's heavy enough to challenge your shoulders – from the top of one shoulder to the top of the other, without straightening your arms. (Your elbows shouldn't extend much past 90 degrees throughout the movement.) The weight shouldn't rise much past the top of your forehead.

The elbow angle on the pulls shown in the video is about the same as it is on the pull-up – 90 degrees at the bottom, about 135 degrees as the top.

We demonstrate it here with ropes, which you probably don't have handy at your gym. One option is to wrap two towels around a bar (another good use for a Smith machine). If those aren't options, just grab anything that's sturdy and allows you to do the movement through the range of movement shown here while keeping your torso aligned with your lower body.

The least popular exercise for lifters – and the most popular for strength coaches, for basically the same reasons – just got suckier. The knee angles for your working leg will range from 90 degrees at the bottom to about 135 degrees at the top.

You can use a band or cable for this. Set it about chest height. The range of motion is essentially shoulder-to-shoulder – from the shoulder nearest the cable machine or whatever the band is attached to, across to the opposite shoulder. Make sure you do an equal amount of work to both sides.

Tempo training has gotten a lot of attention the past 10 years or so, but to tell you the truth, I don't use it much, unless I'm training a bodybuilder or figure athlete. I find it impractical, not to mention boring. My athletes hate it as much as I do, so eliminating it was easy.

If I want someone to move slower, I have him use a heavier weight. If I want him to move faster, I give him a lighter weight. All I ask for is a controlled eccentric. I find this produces the same end result without the annoyance of counting two seconds up and four seconds down.

But I do apply the concept of time under tension (TUT). When working for strength, we have our clients do sets lasting 20 to 35 seconds. For hypertrophy, we use 40 to 70 seconds per set. We use a timer and tell our athletes to work for however many seconds we've designated. We find it works well for gauging the amount of work done, and for assessing progress from week to week.

When we do timed sets of midrange partials, we don't worry about how many reps an athlete performs. Nor do we worry about rep speed – some will be faster, some will be slower. It doesn't make any difference. What's most important is staying within the midrange of movement, with no deviation.

No matter what you think about tempo training vs. working at a natural or self-selected rep speed, midrange partials allow you to spend the entire TUT with your muscles actually under tension. There's never a pause at either end of the rep, top or bottom, in which your arms or legs are straight and you are, in effect, resting. Once you start the set, the muscles you're targeting are under tension until you stop.

Not only that, they're under tension in the part of the range of motion where tension will produce the best results.

I won't give you a specific, step-by-step workout based on midrange partials, just because I think they work best when applied selectively, according to your needs right now. You have a better idea of which muscles need the most work, and how much volume you need for the muscles you're targeting.

At Performance U, we mix midrange partials in with more traditional training methods. They're just one tool, but they're a damned good one. And if you're the type of lifter who likes to feel a pump and a burn when you lift, these could very well give you the best you've ever had. 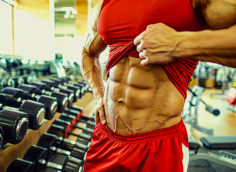 People who want to get lean almost always do exactly the opposite of what they should be doing. Here's the counterintuitive truth.
Christian Thibaudeau May 3

In the second part of the introduction to Testosterone's new Physique Clinic, Coach Thibaudeau talks about genetic limitations, diet, motivation, supplementation, and "Size Kings." Find out if you've got a chance in hell of transforming that lump you call a body.
Training
Chris Shugart November 27

Get more butt stuff done with this variation of the hip thrust.
Exercise Coaching, Glutes, Tips
Dan Chavez May 11