It took science a while to catch up, as usual. But now it’s more or less accepted, in the “evidence based” practice of picking shit up and putting it down, that the mind-muscle connection plays a crucial role in bodybuilding.

So what interferes with establishing a solid mind-muscle connection? How do you strengthen it? Can it be taken too far? Let’s dive in. 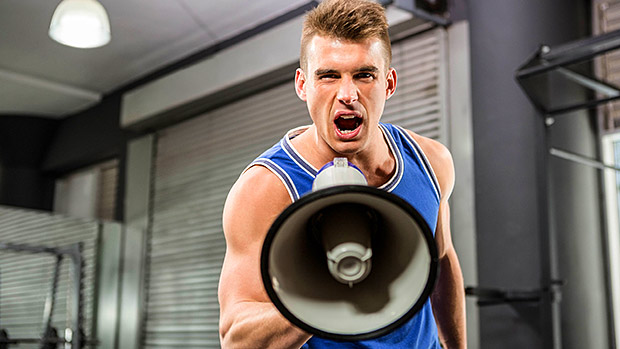 To get a strong mind-muscle connection, you first have to feel comfortable doing the basic exercise. The complexity of the exercise will determine how long that takes.

If you play video games you know that the first levels are what allow you to master the skills of the game. There’s a lot of thinking involved and your reaction times are slow. But the longer you play, the less you have to actually think about the buttons on the controller.

Problems arise when crappy personal trainers give too many cues. You’ve probably witnessed this. The lifter is performing a slow squat while the trainer is barking a zillion different cues at him:

“Sit back with your butt, brace your abs, bend at the knees, keep the chest out, twist your feet into the floor, drive back against the bar, head up, hold your farts in, sing a Barney song…”

It’s absurd. And most of these cues are wrong anyway.

The lifter is going slow because he has too many things to process while trying to move somewhat naturally in an unnatural state – squatting with a heavy barbell on his back.

Do you think this many cues will increase the mind-muscle connection? Nope. And this type of mental overload can be a distraction that actually makes the lifter weaker because he’s neurally programming in the most inefficient way possible.

But this scenario doesn’t just happen with a trainer. It can happen in your own head when you’re trying to remember every technical detail you’ve ever heard about a lift. If you feel overwhelmed by movement cues, then pare it back to the ones that allow you to execute the movement in a way that feels natural.

Practice the exercise that way, then as you acquire more movement mastery, focus on feeling the target muscles work.

Getting a strong mind-muscle connection, at a very basic level, means you’re dictating proper tension distribution and increasing activation in a muscle. Interestingly, this is what bodybuilders refer to as “isolating” a muscle. While it’s true that you can’t isolate a muscle in totality, you CAN make sure that certain areas of musculature produce more tension than others.

Yet we keep hearing this sentiment over and over again: “Don’t train muscles! Train movements!” This is overly simplistic thinking, even for pure strength athletes.

Think of an advanced lifter who’s developed a technical problem in his movement pattern. More often than not, it’s caused by those muscles he hasn’t spent any time developing. Those are the crux of the problem.

Lifters of all types who focus only on movement development are going to end up with very dominant muscle groups surrounded by a litany of weak links. Not a good thing for strength athletes.

Progressive overload is still your bread and butter when it comes to building muscle. If you’re not moving more weight for more reps six months from now, then you’re probably not growing much.

But the context of that overload matters greatly. A 500-pound bench presser who’s using his pecs, triceps, delts, and upper back as contributors to the lift, will find that he’s using far less weight once he focuses the mind-muscle connection on his pecs. This means he’s shifting tension away from everything else and forcing the pecs to do the majority of the work.

When this happens there’s less overall musculature contributing to the lift, but there’s far more tension on the pecs.

Dave Tate tells a story about how he was using 150-pound dumbbells for pressing when he was focused on strength development. But once he focused on the mind-muscle connection of his pecs, he was down to using the 70’s. His overall loading went down, but his actual muscular development went up.

With a strong mind-muscle connection, you’re progressively overloading a specific muscle. Not a movement.

To achieve that, you have to put aside your “more weight” mentality and work within the framework of “more tension on the muscle” and add loading from there. If you’re losing that ability to focus on the muscle doing the work, then it’s a good bet you crossed the loading threshold for maintaining the mind-muscle connection.

When that happens, reduce the weight (and your ego) and get back to making the target muscle do the work. 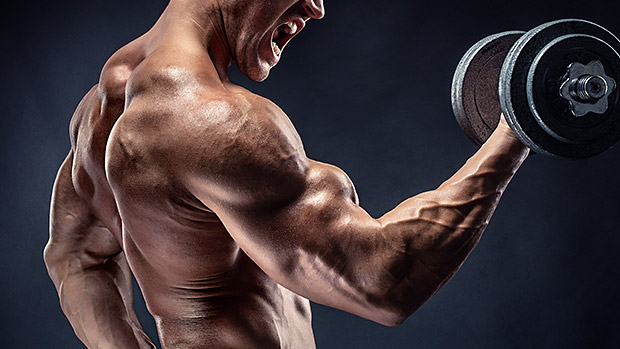 How to Strengthen the Mind-Muscle Connection

These are the three big things you can do:

1. Think about the muscle you’re working.

EMG data shows us that simply thinking about the muscle you’re working increases the activation of it, even if the way you do the exercise doesn’t change.

This is related to something called the “neuromuscular junction.” When you actually think about contracting a particular muscle, the body uses the neurotransmitter acetylcholine, which will cross the space that separates the nerve from the muscle and bind to the receptors on the surface of the muscle fibers. The better you get at envisioning the muscle you’re trying to work, the more motor units you activate.

Think about achieving a strong contraction of that muscle during the concentric (lifting) phase, and think about keeping tension on it during the eccentric (lowering) phase. Easy enough.

If you go so heavy that you no longer feel the target muscle working, then you’ve exceeded the weight at which you can get a mind-muscle connection. Quit going so heavy that you can’t focus on the muscle that’s supposed to be doing the brunt of the work.

3. Alter the mechanics of the movements.

This part gets a bit trickier and it may require some tinkering. Judiciously experiment with the mechanics of your form in ways that will give certain muscles a disadvantage. Make an exercise feel harder or easier.

You want to create a stable physiological environment for the muscle to work from to maximize the output of the target muscle. There are countless ways to achieve optimal mechanics, but we’ll cover some things you can do immediately that can help to facilitate a better connection.

The Roll-On Concentric and Slow Eccentric

Whatever muscle you initiate the concentric/lifting portion of the rep with is going to do a significant portion of the work and hog a great deal of the tension. If you can’t feel the muscle working during a set, then it’s a good sign you’re not initiating with it.

How do you fix this? Slow down the concentric part of the rep for a while. This allows for greater focus on the prime mover for an exercise. It’s true that slow concentrics won’t activate the high threshold motor units, but there’s a way to eliminate that issue once you’ve established a good mind-muscle initiation. I call them roll-on concentrics:

Think of drag racing. You don’t just floor it when the light turns green. You “roll-on” the accelerator in order to “hook up” and then you go fast. This is a perfect metaphor for how to perform concentrics that have good initiation and help to create better mind-muscle connection.

You initiate the concentric with the target muscle in a slow and deliberate manner, THEN you accelerate through the remaining concentric. After you’ve spent some time performing your reps this way, the initiation becomes more natural with the target muscle. Eventually you’re no longer thinking during the rep; you’re just executing with proper initiation while maintaining that mind-muscle connection.

But it doesn’t stop there. The second part is to slow down the eccentric/negative. Most people ignore the eccentric altogether when in fact it has a higher potential for muscle growth than the concentric. The eccentric causes more muscle damage, boosts mTOR (which is responsible for cellular growth and regulates muscle protein synthesis), is metabolically inexpensive (very little ATP used), and increases force production.

And if you actually think about keeping tension on the muscle as it lengthens, you’ll tap into a better connection with the target muscle.

Of the three types of contractions, isometrics probably get the least amount of love in a training program, but if you need to establish a better mind-muscle connection then they can work.

I’m not a big fan of including a bunch of “activation” movements to do this because it can be done just as effectively within the framework of your chosen exercises.

Any movement that has an ascending resistance curve, while also training the muscle in the shortened position, offers the ability to do some sweet isometric holds. Think leg extensions, leg curls, lateral raises, pec-deck work, lat pulldowns, chins, spider curls, etc. These all can be used to increase the mind-muscle connection by simply holding the top of the rep for 3-5 seconds.

If you can’t feel something “working” during a movement, then select one of these types of movements and hold the top of the rep for 3-5 seconds before lowering. Do 20 reps this way. Do 3 sets that way. Don’t want to? We all know why, tough guy.

Hell, you could even do it with compound movements in the mid-range position. Coming halfway up on a split squat will hammer the glutes, and pausing just a few inches off the bottom of an incline press will do the same for the pecs. Now imagine combining the roll-on concentric style in conjunction with an isometric hold. That’s some sweet tension distribution to the target muscle.

You can also start the set with iso-holds, which I outlined in the 10-6-10 method.

Ideally you want to provide efficient stability to the joints using the stabilizing muscles (usually the antagonists of what you’re isolating). In this case, you’ll have the ability to increase output by the muscle you’re actually trying to work. This results in achieving a strong concentric contraction by the target muscle and a high degree of output.

But there’s a point of going overboard. If you’ve already got a decent mind-muscle connection and you try to increase sensation even further, then you may end up getting one of those really crampy contractions where the muscle is at damn near spasm level.

This happens when you sacrifice proper stability and joint angle relative to the movement performed. When this happens, you’re actually getting less output from the target muscle. This also creates a lot of dysfunctional feedback to the brain as to how the exercise needs to be performed optimally.

Take a hip thrust for example:

The range of motion to effectively target the glutes is actually quite short. At the top of the movement, the glutes shorten naturally as the hips go into extension. To create stability, the abs need to be pushed down to help stabilize the pelvis, which in turn allows more output from the glutes.

But quite often, the lifter will end up pushing harder through hip extension and the glutes can get into that “crampy” contraction. This provides less stability to the pelvis which means the glutes now have less ability to produce force. Avoid that.