Every kid who walks into a weight room for the first time wants to learn the bench press. It's the ultimate teenaged-guy lift, and as such many a high school pecking order has been established simply on the basis of bench-pressing performance.

However, the bench press has its drawbacks. It can be brutal on the shoulders and rotator cuffs for some, while others simply don't feel it in the chest and abandon it for a dumbbell or machine variation. For those who love the effect the bench press has on their triceps but hate what it does to their delts, there's a classic but under-used exercise that's right up their alley – the barbell floor press.

The floor press is a pure upper body movement that allows you to press massive weights without undue shoulder stress, maximizing your training efficiency and protecting your shoulders for long-term training and strength gains.

The floor press is the original horizontal barbell press, even predating the bench press. At one time lifters attacked the lift with gusto, putting up some impressive numbers, including George Hackenschmidt's 361-pound strict floor press back in 1899. Unfortunately, as the bench press grew in popularity, interest in the floor press outside of powerlifting circles waned to the point of relative obscurity.

Why the Floor Press?

Whether you're training for a massive bench press or maximal hypertrophy, the floor press deserves a place in your high-performance repertoire since it conveys the following benefits:

This creates a marked decrease is sub-acromial space and increases impingement in the shoulder. The floor press reduces the range of motion of the shoulder and subsequent injury risk while still training a massive press. 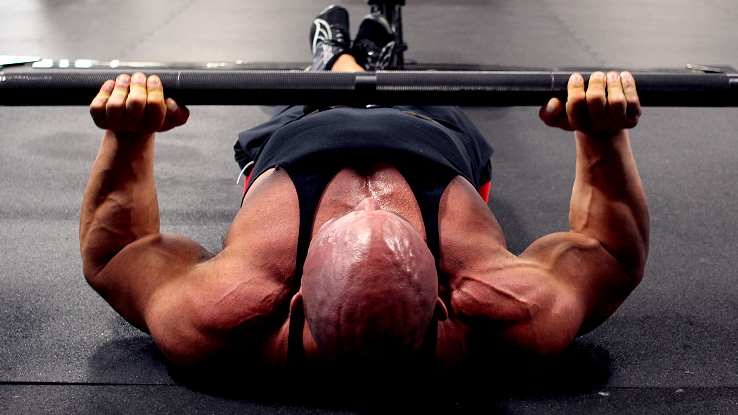 The name "Floor Press" says it all, right? Line up on the floor and push weight. Not so fast, my friend. Success lies in the detail and masterful execution of proper technique.

The floor press can be programmed either as a max effort lift or dynamic movement. I prefer the floor press for maximum effort movements rather than straight bar bench pressing, especially for those who aren't tested for sports or competing in powerlifting.

If powerlifters are floor pressing on max effort days, then training full bench presses on dynamic days works exceptionally well. On max effort pressing days, work up to one, two, and three-rep maxes, aiming to beat personal records when you perform singles.

A four-week cycle could look something like the following, with each month using a new 1-RM from the previous month for calculating intensity. Your floor press max will likely fall between 75-85% of your best bench press, but it's best to find your true max before using any percentage-based training.

If using the floor press as a dynamic movement, stick between 40% and 70% of 1RM and no higher, with an emphasis on maximum bar speed.

If you're barrel-chested with short arms, the floor press can be a full range of motion movement, in which case consider a longer pause. If you're aiming for maximum strength gains, get comfortable performing near-maximal singles. You won't push as much weight since you won't be using leg drive, but you'll make rapid gains. Adjust your numbers accordingly.

Man-love for the barbell bench press is real, but so is the dysfunction it creates at the shoulder joint. Rather than ditch your press altogether, opt for the floor press. You'll build massive dead-stop strength, shatter plateaus, and provide some relief to your beat up shoulders.

"Back in the days of being 297 pounds, every workout was brutal; there was no other alternative. That's not the case any more. Have I become soft, like a former all-star playing out a multi-million dollar contract?"
Training
Warren Scott Smith January 3

You really want to know? Paul Carter has some life advice for you, and also some bodybuilding advice.
Bodybuilding, Tips, Training
Paul Carter February 8 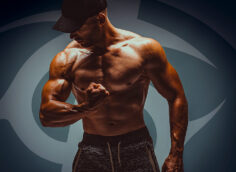 Haven't seen much arm growth in a while? Here's how to build biceps that are being stubborn. Videos and full workout included.
Arms, Bodybuilding, Exercise Coaching
Eric Bach January 31

What to do before you ever lift the bar, plus some great advice about form.
Back, Bodybuilding, Tips, Training
Paul Carter May 18