Instead of keeping your shoulders parallel to the ground, rotate your torso slightly toward the same side you're holding the dumbbell. So if you're doing single-arm rows using your right arm, rotate your right shoulder roughly 15-degrees so it's slightly lower than your left shoulder.

Here's why: When doing dumbbell one-arm rows, people usually pull the weight halfway with good form, then pull it the rest of the way up by turning their torso away from their rowing arm. As you're lifting the weight and getting closer to the end of the range of motion, you're getting weaker (more on this in a bit). The weight is getting heavier because the lever-arm is getting longer.

Note: If you're trying to focus mostly on your lats rather than mid-back, then this tweak won't apply. Though the lats are often better developed relative to the mid-back muscles, they're also targeted during vertical pulling exercises.

Instead of using a dumbbell, try them using a low cable.

Here's why: The dumbbell triceps kickback isn't bad. To see why doing a kickback using a low cable is better, you first need to know about "length-tension relationship" or what many lifters call the strength curve.

But using the dumbbell gives you no loading demand on the triceps at the bottom of the exercise, when your elbow is bent at 90-degrees, which is where you're strongest. Same thing at the top of the range of motion, when your elbow is straight and your triceps are shortened (contracted), which is where you're weaker – the weight is at its heaviest because the lever-arm is at its longest.

This is why so many people cheat at the top-end of the range of motion when doing dumbbell kickbacks by using momentum or dipping their arm or torso farther forward. So when doing dumbbell kickbacks, you're getting weaker as the weight is getting heavier. Sure, you could just go lighter, but doing kickbacks using a low cable does two things: The cable gives you more tension through the range of motion, and it involves a resistance curve that matches the strength curve better.

Start the exercise with the cable at roughly a 45-degree angle to the floor. This will load the bottom position of the exercise and create the longest lever-arm in the mid-range aspect of the motion. It'll also create a short lever-arm at the top of the action.

Instead of lifting the arms straight out to the sides, lift the arms in the scapular plane, at roughly a 30-degree angle to the torso.

Here's why: Research shows that doing shoulder exercises in the plane of the scapula creates the same demands on the shoulder musculature, but lessens the unwanted stress on the rotator cuff tendon.

Keep the arms at an angle to the torso, in the scapular plane, instead of directly out to the sides.

Here's why: Just like with the lateral raises, doing this exercise in the plane of the scapula will create tension in the delts, but decrease joint stress.

Every time you raise your arm overhead there's some level of contact of the rotator cuff on the acromion, so there's always some level of impingement with arm elevation. But you don't want excessive contact that causes irritation and inflammation, which can lead to shoulder impingement syndrome. Doing the dumbbell overhead press in the plane of the scapula is one strategy that minimizes the joint stress.

Many lifters think a proper squat is a shoulder-width stance with your feet pointed fairly straight forward. The new angle here is to not take such a one-size-fits-all approach to squatting. Instead, adjust your stance (foot width and position) to best fit your body and to fit the way you move.

Here's why: Research in both Eastern and Western populations has found normal variations in femoral neck angle, and also asymmetrical differences between the left and rights sides of individuals. This in addition to normal anatomical variations in the structure of the hip acetabulum (socket of the hip bone) can influence how you're able to perform the squat movement.

The normal anatomical variations of the hip joint, in addition to the length of your torso, femur, and tibia – structure determines function – shows than an optimal squat is very individual, and therefore comes in a variety of foot positions, stance widths, depths, and torso angles.

Combine the Romanian and sumo deadlifts, which you'd do with a more narrow stance and a more upright torso.

Here's why: For many, the hybrid deadlift is a smart substitute for traditional deadlifts. Why? Two reasons:

One study did a biomechanical analysis of straight bar and trap (hex) bar deadlifts and found that the trap bar deadlifts placed less overall load on the lumbar spine because it also involves a shorter lever-arm. However, not everyone has access to a trap bar.

Whether you're performing reverse lunges, walking lunges, or Bulgarian split-squats, hinge at your hips and lean your torso slightly forward at roughly a 45-degree angle while keeping your back straight.

At the bottom of each rep, the dumbbells should be on each side of your front foot instead of by your hips, which is where they'd be if you were performing this exercise in the normal manner with an upright torso.

Here's why: Leaning your torso forward increases the recruitment of the glutes and hamstrings. Doing this places less force on your knee joint and therefore demands less activation of the quadriceps.

Note: If you're targeting the quadriceps, then skip this variation. Integrate both torso positions into your lower-body training.

That said, placing an emphasis on performing these exercises with a forward torso lean can be especially helpful to females since women are more quad-dominant than men, tend to have weaker hamstrings, and therefore may be more prone to knee injury.

But many people who get shoulder pain with overhead pressing can perform the angled barbell press (landline press) – a diagonal pressing movement – without discomfort. Diagonal pushing is overlooked yet effective, which means a comprehensive approach to upper-body pulling movements doesn't just involve vertical and horizontal pulling, it also involves diagonal pulling exercises.

Got a lagging or weak muscle group? Hit it first in the workout for better results. Here's the science that backs it up.
Tips, Training
Bret Contreras & Brad Schoenfeld, PhD February 24 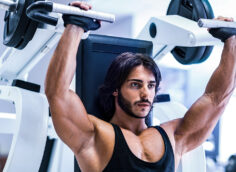 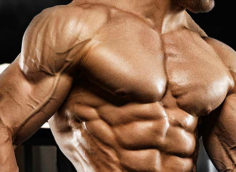