Everything You Need to Know About Lunges

The lunge or split squat is one of the most popular lower body exercises. The problem? Most people, including many "expert trainers," do them improperly, negating the benefits. Here's how to master them.

Teaching someone to lunge who barely has the ability to balance on one leg makes about as much sense as having someone who can't hold a plank do ring push-ups. Build your foundation first. For lunges, that foundation begins with the feet and ankles.

Most people think a lunge is an upright movement with the torso perpendicular to the ground throughout. But that's flawed mechanics. Maintaining a forward torso lean onto the heel of the front leg is essential.

In fact, this may be the most critical cue. It ensures the hips are pushed back posteriorly and actively engaged throughout the exercise. A good lunge involves solid hip hinge mechanics. An overly upright torso places greater stress on the knees and low back while minimizing stress to the glutes and upper thighs. That's not what you want.

3 – Move Straight Up and Down

When doing a stationary lunge, the torso should move straight up and down while maintaining a continuous forward lean in the torso. Any horizontal displacement of the torso indicates faulty hip mechanics and lack of spinal rigidity.

Assume a very tall position on the back foot by keeping the heel of the back leg up and parallel to the wall behind you.

Allowing the body to sag on the back leg with the heel dropping towards the floor is a big mistakes. This causes the hips to drop down and forward, eliminating activation to the posterior chain while simultaneously placing greater stress on the lumbar spine. Instead, the heel should be lifted as far away from the floor as possible with all of the pressure on the ball and toes of that back foot.

Get in the bottom of a lunge then move into a squat without adjusting your hip mechanics or torso angle. Then do the reverse by going from your squat back to your lunge while keeping the same body alignment. If you're able to do this test without losing balance or feeling pulled out of position, your lunge mechanics are pretty solid. If not, it's time to clean up your lunge form.

6 – Hollow Your Core and Brace Your Abs

Hollowing out the core and keeping the abs pulled in and braced are key technique cues. This ensures the hips are set back rather than sagging forward. Sagging hips are directly correlated with excessive lumbar extension and lack of core activation.

In contrast, a braced and tight core helps to facilitate the tall, forward lean position. That's because all movements require a rigid and neutral spine to achieve optimal mechanics. This can only occur when the core is intensely engaged.

8 – Use a Semi-Inline Foot Stance

Use a semi-inline or semi-overlapping stride position. Both feet should line up right next to each other with no space between them.

Unfortunately, most people perform lunges and split squats with a "straddled" or staggered stance where there's several inches of space or more between each foot. This engrains faulty hip activation and dysfunctional stride mechanics that translates to groin pulls and inflammation to the hip joints. It also causes energy leaks throughout the lower body that result in loss of torque, power, and stability.

Similar to a squat or deadlift, the spine needs to be set in a neutral position on lunges. This involves slight but not excessive t-spine extension with the shoulders slightly retracted and depressed throughout. The head should be kept neutral rather than hyper-extended at the cervical spine.

If you want to work the glutes during the lunge, the worst thing you can do is to squeeze them. Yes, that sounds completely contradictory, but it isn't.

A good lunge requires strong hip hinge mechanics, particularly during the eccentric (lowering) phase of the movement. To tax the glutes, they must be eccentrically elongated during the negative. That means the hips have to sit back posteriorly rather than allowing them to drift forward.

While it's important to use a full range of motion on a lunge, many lifters collapse to the floor as a result of losing tension and muscular tightness.

Touching the floor doesn't necessarily represent flawed recruitment patterns as long as you control the descent and gently touch or slowly settle to the floor while maintaining good mechanics and alignment. However, for most people, terminating the range of motion with the back knee 1-3 inches above floor height will be ideal.

Deficit lunges where you stand on two boxes or benches to get more range of motion are popular. Although this provides a large stretch, it causes tightness and inflammation in the lower extremities as well as slight alterations to other movements, including gait mechanics.

Most people shouldn't be doing walking lunges. This dynamic method often causes form and mechanics to degrade. There are several reasons for this. First, forward momentum has a tendency to drive the hips too far anteriorly, making it difficult to keep optimal hip hinge mechanics. That's why many lifters complain of knee and low back pain associated with lunges.

Second, the walking or stepping lunge (forward or backward) is much more difficult to correct and fine-tune. The movement occurs too quickly to make subtle adjustments to form. Stationary lunges, particularly when done in a controlled and methodical fashion, allow you to hone in on your mechanics and make adjustments.

Finally, most people have poor balance and stability. If you have faulty hip, foot, and ankle mechanics, walking lunges set you up for failure and further degradations in technique. You'll be forced to rely on compensation patterns and straddled stance alignment in order to maintain balance. However, once proper lunge technique is mastered and all traces of dysfunction are eliminated, walking lunges can still provide unique benefits.

Lunges can be done with a variety stride lengths. Longer stance positions generally target the hips and glutes more intensely. Shorter positions tend to target the quads. The key is to not let stride length dictate lunge technique. Form should remain relatively constant.

Some lifters will take a stride position and do lunges with the intention of creating a large stretching sensation in the hip flexor of the back leg. But this eliminates good hip hinge mechanics, promotes excessive lordotic curvature of the spine, and places extreme strain on the hip flexor of the back leg. It can also lead to pulls and tweaks in the groin and hip area, particularly when added into a training routine that involves running and sprinting.

Rather than trying to get a big stretching sensation, find the strongest and most stable position while using good mechanics. This will allow the hip flexors to be stretched to their natural extent, not beyond it.

Proper lunge mechanics produce biomechanically sound osteokinematics that allow you to safely handle the heaviest loads with the greatest efficiency.

If you don't know whether or not you have strong lunge mechanics and efficient technique, assess your strength. A good rule of thumb: you should be able to use at least 50% of your 1RM squat and perform several solid lunges with controlled technique and smooth form.

If you're unable to do this, then your lunge mechanics are most likely amiss.

There's a strong correlation between the ability to perform eyes-closed lunges, body mechanics, motor control, and injury prevention. Eventually you should be capable of doing at least 50% of your bodyweight during eyes-closed lunges. A 200 pound lifter would use 50-pound dumbbells or a 100-pound barbell.

These should be done barefooted or while wearing minimalist shoes and pausing at the bottom, 1-3 inches from the floor. 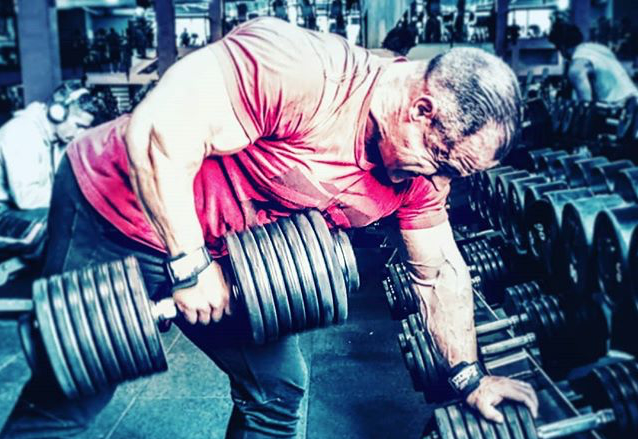 Blast your abs, shoulders, arms, chest, and back – even if the gym is packed and you're short on time. Here's how.
Bodybuilding, Powerlifting & Strength, Training
Nick Tumminello May 26

A simple technique plus a change in grip can make pulldowns work much better. Check this out.
Tips, Training
Lee Boyce April 26