High-bar or low-bar squats? Which is better for YOU? Here are the pros and cons for each.

The High-Bar Back Squat (Quad-Dominant)

This is essentially a normal squat. When powerlifters started using a low bar placement and more of a hip hinge to lift more weight, there needed to be a differentiation between the typical back squat and the technique used by some powerlifters.

In a high-bar squat, the bar goes across the shoulders at around the upper trap level. The torso is kept as upright as possible. As a result, the hips won't move as far back as they would in a low-bar squat, and the knees will move forward a bit more. It's more knee-dominant, while the low-bar squat is more hip dominant.

It offers a good balance of lower-body development with an emphasis on quads. The high-bar placement will put more emphasis on the quads (if you can maintain a proper torso position).

It's not ideal for those with long limbs relative to their torso, especially if they have long femurs/short tibias. Those with a shorter torso and longer legs will have more trouble with the high-bar placement since their natural squatting pattern is to include more hip action. If they have long femurs, it's even worse.

Long-limbed lifters will tend to do a high-bar squat with the same mechanics as a low-bar squat (hip-dominant), but when you combine that high bar placement with a hip-dominant squat, you'll be limited in how much weight you can use.

Who It's Best For

This should be the staple lower-body lift of those with short limbs and a longer torso, especially if they have short femurs/long tibias. It's also very effective for those with a balanced body type, though the front squat may be an even better quad-focused lift for them.

It allows lifters to handle more weight during a powerlifting competition. While it's named after the placement of the bar, the key is really the hip-dominant squatting mechanics.

You squat while pushing your hips back (sitting back). Naturally, this will make your torso lean forward. When you lean forward, the higher the bar is on your shoulders, the harder your lower back must work. So if you put the bar lower – on your back rather than shoulders – you reduce the resistance arm and the amount of force the lower back has to produce. You're using a low-bar position to maximize the weight you can lift while using a hip-dominant squat.

You can use more weight by involving the hip muscles to a greater extent. It can develop the posterior chain.

It overloads the lower back and requires good shoulder mobility. It offers less quad stimulation and isn't ideal for people with longer torsos.

A longer torso means that even with a low-bar placement, the lower back will have to work a lot more. This can counterbalance the strength gained from using the hips more.

Who It's Best For

Those with long limbs and a short torso. For them, it's the more natural way of squatting and will lead to the biggest weights being moved. But it remains more of a posterior chain exercise.

Be the boss, think for yourself, and stop being a doormat. Here's how.
Tips, Training
Dani Shugart October 2 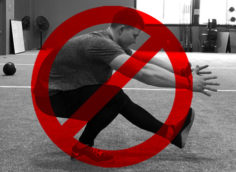 Crack open his cranium is exactly what some of you might want to do to Chad after reading this article. It seems the boy has gotten used to being flamed and now he's just beggin' for it!
Training
Chad Waterbury June 11