Can You Gain Muscle and Lose Fat Simultaneously?

Is "recomposition" possible? The short answer is yes, but it's ordinarily very hard to do. The vast majority of those who try to do it will fail. In fact, they'll end up achieving neither.

Before I tell you how to successfully recomp, let's look at the main reasons why people fail. If you can avoid these issues, your chances of success are much higher.

The greater the caloric deficit, the more cortisol you produce and the more likely you are to lower mTOR, IGF-1, and insulin, which gives you the worst physiological profile for building muscle.

The calories you need will vary from person to person, but we're trying to lose around one pound per week. More than that and it'll be hard to build muscle.

2 Being in a caloric deficit seven days a week.

Being in a chronic caloric deficit is more likely to lead to metabolic adaptations that'll make it harder to keep losing fat and build muscle. You'll have to reduce calories more and more, which will increase cortisol, making it harder to build muscle.

The key is having enough of a deficit to lose around one pound per week, but that deficit doesn't have to come from being in a deficit seven days a week. You can have a slightly larger deficit five days a week and then engage in a slight surplus two days a week.

There is no question that low-carb diets make you lose fat. Whether going low carb is more effective than just following a more balanced diet is open for debate. But low-carb plans are certainly simpler to plan, not to mention that some people tend to be more motivated by extreme diets.

For recomposition, however, a low-carb diet makes things much harder. Even when ingesting a caloric surplus, a low-carb diet makes muscle growth more difficult. Low carbs, like low calories, lead to lower mTOR, less IGF-1, and less insulin (and also more cortisol since one of cortisol's functions is to work with glucagon to increase blood sugar levels when low).

Dieting already does all of that to some extent, but combining it with a very low-carb intake will simply make matters worse.

4 Too much lifting volume.

Instinctively, people who want to recomp add lifting volume. Their reasoning is that more training equals a better chance of building muscle, as well as allowing them to expend more calories. This approach might work for two to three weeks... until bad stuff starts to happen.

Again, you'll produce more cortisol (which is already higher in a caloric deficit), which hurts your chances of building muscle and maybe even contributes to negative metabolic adaptations – too much cortisol can lower T3 levels, which decreases metabolic rate.

You can also produce a degree of muscle damage that exceeds your capacity to repair it.

5 Not enough off-days from lifting.

As you can see, the common root of recomping failure is being excessive, like cutting calories and carbs too much, dieting hard every day, and using more and more volume. It's the same with off days, or lack of them.

It's probably because people are short sighted and assume that a day they're not in the gym is a day they're not improving their physique. I get it. Emotionally you want to speed things up, but trying to do that will actually slow down the process.

Off days are days where you can lower cortisol and adrenaline levels, facilitate muscle glycogen replenishment, and spend more of your energy repairing and building muscle instead of fueling a workout. Off days are growth days.

6 Not enough training frequency per muscle or muscle group.

Every time you train a muscle you activate mTOR, increase protein synthesis, and improve insulin sensitivity in that muscle, all of which contribute to the anabolic response. If the anabolic response is higher than the catabolic factors (cortisol for example), you'll build muscle.

Cardio has a bad rep among many lifters. I even wrote articles against cardio in the past. Still, provided it's not excessive and isn't the type that will jack up cortisol levels, cardio can be a very useful tool when trying to recomp.

First, cardio allows you to eat a little bit more. That's the main benefit when it comes to recomping. Let's say you do 200 calories' worth of cardio four days a week. Well, that essentially allows you to eat 150-200 calories more on those days and achieve the same result as if you had skipped cardio and eaten less.

When it comes to recomping, adding 200 calories of food (like 50g of carbs or something like 20g of protein and 30g of carbs) will be more beneficial than any potential drawbacks you might get from cardio.

Here are the specifics of losing body fat while simultaneously gaining muscle:

1 Adjust food intake so that you lose roughly one pound of body weight a week.

More than a pound a week makes it unlikely that you'll build muscle. Understand, though, that on the first week you might very well lose three pounds or more simply because of water loss. Wait two weeks before you start making any adjustments.

2 Don't use a caloric deficit every day of the week.

Use two non-consecutive days where the calories are slightly above maintenance. This reduces the chances of negative metabolic adaptations and will help you build muscle a bit more easily. Do your biggest/hardest workouts on those days.

If you need to reduce calories because you didn't lose a pound on a given week, decrease the caloric intake on the low calorie days while staying the course on the surplus calorie days.

Remember, though, that these surplus-calorie days are NOT cheat days. Just eat the same kind of physique-supportive food your normally do, only more of it.

Shoot for 1.25 grams of protein per pound of body weight (1.0g per pound will be adequate for most, though). Obtain about 70% of the remaining calories from carbs, which should be strategically placed around the workout (pre, intra, post) and in the evening.

I prefer liquid workout nutrition like Plazma™ for pre- and intra-workout meals, but I like solid carbs post-workout and in the evening. If, however, you have a stressful life or work a physical job, I suggest a more even carb distribution throughout the day.

Let's say that you weigh 200 pounds. That would give you a starting macronutrient and calorie plan that looks like this (remember, you're getting about 70% of your non-protein calories from carbs):

Carbs on low calorie days (in our example)

4 Lift four days a week while hitting each muscle 2-3 times per week.

Do three whole-body days based on the big basic lifts and one "easier" workout where you use mostly isolation work for lagging muscles or body parts that weren't hit properly by the big lifts.

I might even add a fifth workout, but that would be a really minor session where you work abs, calves, and forearms or do some band work. In most cases, though, it should be four days a week.

I recommend 4 to 6 exercises per workout for roughly 3 work sets per exercise. (If it's 6, do 3-4 compound movements and 2-3 isolation exercises.) When given the choice between increasing volume (doing more total sets) and intensiveness (how hard you push each set), I prefer to increase the latter.

6 Make variation the cornerstone of your program.

Change your training every third week. So do the same workouts for two weeks before switching things up on the third. The more different you can make it, the better it is. You even want to vary the workouts during the week to place different demands on the muscle.

For example, when I use a whole-body approach, I like to use slow eccentrics/negatives the first day, stato-dynamic sets (including pauses and holds during each rep of a set) on the second day, and regular lifting or pure concentric (lifting from pins) on the third workout.

7 Include low stress cardio in your routine.

This could consist of relaxing walks or spending 20 minutes on the treadmill. Just make sure it doesn't turn into an endurance session.

Additionally, doing the wrong kind of cardio or too much of it will definitely be problematic and could lower your chances of gaining muscle while losing fat. That's why I prefer to stick to very low intensity cardio like walking.

Doing it early in the day is best because cortisol and adrenaline are naturally higher at that time, which makes it easier to mobilize fats as fuel.

Important: I really like loaded carries for recomposition, but I don't count them as cardio. Instead, I count them as a lifting exercise. For example, if I am doing 5 exercises per session and decide to do farmer's walks, I count that as one compound movement, leaving 4 other exercises to choose.

Body recomposition is definitely possible if you find a way to fight your urges and insecurities. Almost every mistake people make while recomping has to do with being excessive with their training and dieting, or from just being impatient. You need to curb those inclinations. 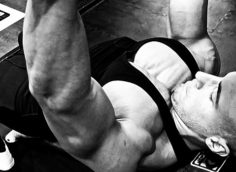 Turn up the gains and spend less time in the gym with this classic bodybuilding method.
Back, Bodybuilding, Chest, Tips, Training
Eric Bach November 29

Use this movement as a warm-up, to build more explosive power, or to get better at Olympic-style lifting.
Exercise Coaching, Tips
Christian Thibaudeau January 27

Feel better in 30 seconds. This is a must for those who have to sit a lot at work. Take a look.
It Hurts Fix It, Tips, Training
Bret Contreras September 8
There's no such thing as isolation in training or in life. Everything you do, have done, and will do, affects everything else. Success is a synergistic – not additive – phenomenon.
Training
Eric Cressey May 23