Can You Really Burn Belly Fat?

That title sounds like clickbait, right? Well, it is. I'm gonna go buy a Ferrari now. No, seriously, a new study showed that a certain type of workout does seem to preferentially "burn" belly fat – visceral fat deposits in fancy-speak.

Here's the exact workout used in the study. Below, we'll break it down and get nerdy.

According to the study published in the Journal of Obesity, this workout above resulted in:

The study was conducted on overweight men in their 20s who were instructed NOT to change their normal, crappy diets. That's important. The researchers also noted that similar effects could be experienced by women too, along with men in other age groups.

Yeah, we could've guessed that sedentary dudes would lean up when they started doing tough metabolic conditioning workouts. But there are a few interesting things here and some things we can extrapolate and apply to our own workout plans.

First, the study participants didn't change their diets, or at least they weren't supposed to. Most probably didn't, but the researchers speculated that some of them may have made unconscious dietary adjustments because HIIE (high-intensity intermittent exercise) may have a suppressive effect on appetite. (That's what some rat studies show, at least.)

Now, imagine their results if they'd also dropped a modest 200 to 300 calories from their daily intakes. Most would probably have lost 15 or more pounds.

Second, the guys built some muscle in their legs while losing fat. Sure, they were untrained, but simultaneous fat loss and muscle gain did happen, so let's stop it with all the "it's impossible!" rhetoric.

Third, the participants trained only an hour per WEEK: three 20-minute workouts. In related studies, participants did steady-state cardio – jogging or light cycling – for an hour per DAY and experienced about the same results, minus the new fat-free mass in their legs.

Seven hours per week versus one hour per week to get the same results? I'll take the hour.

The researchers speculated that high levels of catecholamines produced by HIIE may "underlie its ability to reduce visceral fat." Catecholamines were shown in other studies to drive lipolysis and are "mainly responsible for fat release from visceral fat stores."

Studies on overweight young women and older men who did this type of exercise also showed a reduction in belly fat. Remember, sub-abdominal fat is strongly linked to cardiovascular disease risk and other health problems. It's also ugly.

Likewise, the researchers said that post-exercise fat oxidation may have also played a role.

If your main goal is fat loss, this style of high-intensity intermittent exercise will save you a ton of time... if you can hang in there for 20 minutes. Eight seconds of sprints paired with twelve seconds of "rest" is pretty brutal.

Wanna try it? You could follow the same workouts given to the study participants, but don't sweat the details. Pick any cardio machine, go hard for a while, back off, catch your breath, and go hard again. You know, like when you're doing sex.

Abs are made in the kitchen... and at the cable machine. After all, you have to build them too in order to see them. Check out these exercises.
Tips, Training
Bret Contreras July 3 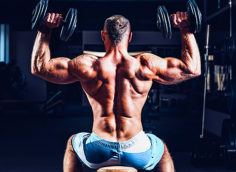 A lot of trainers will tell you to stop pressing to avoid injury risk. They're dumb. Here's what to do instead.
Training
Lee Boyce September 1