There's no shortage of deadlifting articles on T Nation, and for good reason. It's a hard core, painful, skin-tearing lift that can be loaded heavily, which makes it about as appealing to the bourgeois body-pump crowd as pumping their own gas during high humidity.

But if the goal is to get seriously strong or pack meat onto a dwindling posterior chain, the deadlift solves the problem as decisively as a squinty-eyed, elephant gun-toting Charles Bronson solves urban decay, minus the double-digit body count and empty shell casings.

Despite all that's been written, I still see some of the exercise's finer points (yes, there are a few) misunderstood or improperly applied, particularly when the goal is to lift as much weight as possible.

Keep Your Chin Up Kid

Ask most "experts" about head and neck position during the deadlift and you'll immediately hear tips like "maintain a neutral spine," or "keep the chin tucked and neck packed." I disagree with these recommendations, and a lot of good lifters agree with me.

In the early days lifters tended to look up or keep their chin high when deadlifting, likely because they instinctively figured out it works better. However, as the academics started to enter the strength training world and biomechanics was better understood, the goal on most exercises shifted to achieving and maintaining a neutral spine position from the lower back through to the neck and head.

This is probably a good idea on most exercises – but good form for most exercises somehow became good form for all exercises, and now we have a problem. Because if you want to pull big weights, you should not look down or straight ahead but up to the ceiling with your chin high.

The first reason to look up is muscular. When you extend your neck it makes some of the muscles in your trunk, namely the posterior muscles, contract better.

According to strength training legend Mel Siff, flexing your neck (looking down) causes your back muscles to relax, while extending your neck helps them contract. (For more info on how important the back muscles are while deadlifting, read this article.)

The second reason to keep the chin high is due to biomechanics and leverages. A big challenge when deadlifting heavy is being able to lock out the weight at the top. It's common for the shoulders to roll forward a bit when going heavy.

A little rounding of the thoracic region is okay, but if you've ever managed to lift a heavy bar above your knees and then got stuck because your shoulders were too far forward, you know what I mean.

Simple is often best and for me it just clicked. 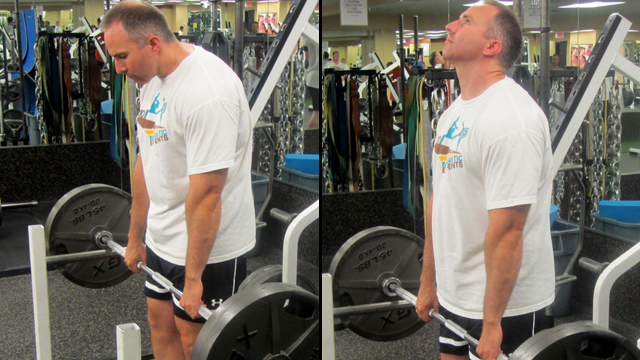 The third reason to look up when deadlifting heavy is because it works. The list of lifters that use the "chin-high" method is lengthy, and includes names like Kirk Karwoski, Andy Bolton, and Ed Coan. You've heard the expression, "Success leaves clues"? Well, that's a big clue.

I understand that not everyone is built exactly the same and optimal head position for one person may not be optimal for another. But if you're a coach, trainer, or athlete and are interested in building your deadlift, you should consider looking up while deadlifting (if you don't already). Furthermore, if you already look up a bit, you might find looking up more forcefully to be helpful, especially as the bar nears or clears your knees.

Here's a video of what I'm talking about featuring two excellent deadlifters, with the main focus being on Bryan Dermody, former strength and conditioning coach for the New York Jets. What I like about this video is on his last lift you can almost tell that if he wasn't looking up he wouldn't lock out the lift.

Negatives of Looking Up

There are pros and cons to everything, and there can be cons to looking up while deadlifting. Looking up forcefully might make the lifter lose their balance and fall backward, which is more common with light weight. A little bit of practice should fix that issue.

Also, when looking up there's a tendency to keep the knees slightly bent – in a powerlifting competition this could cause the lift to be disqualified. The solution is once the bar is locked out to shift from looking up to looking straight ahead and locking the knees. Interestingly, that shift in head position from extended to neutral is a tell-tale sign that a lifter was looking up while deadlifting.

For you worry-warts, looking up likely isn't dangerous for the neck, but obviously someone with a preexisting neck issue should use caution or just skip the idea altogether and maintain a neutral position.

The second thing to consider when deadlifting is to roll the bar before pulling it up. The principle behind this is simple: objects in motion tends to stay in motion, objects at rest tend to stay at rest. Once the bar is moving along the floor, it's easier to get it up.

You've probably experienced this already. You know how when you want to load a bunch of plates onto the deadlift bar but hope to save your back, you roll the weights onto a small plate to raise them up a bit so it's easier to slide on the plates? If you already have a lot of weight on, it's easier to first roll the barbell before sliding it onto the little plate versus lifting the load up from a standstill.

It's like rocking a car stuck in the snow; you move it back and forth to get it moving and then it goes. Essentially, get into deadlift position, roll the bar out in front of you and then roll the bar back towards you. When the bar hits your shins, pull it up and deadlift like normal.

Here's a video of why rolling the weight is easier:

There are some other additional benefits to rolling the bar before lifting it, including greater use of the stretch reflex, something generally missing in the deadlift. This method can also help get the bar closer to the shins (which is key in a deadlift), or get into a better starting position. Rolling the bar in might also help activate the lats.

The negatives of rolling the bar is that it takes a while to get used to – it might take 5-10 deadlift sessions before you really start getting comfortable with it. If you time it wrong, you'll start pulling before the bar is in close enough, putting you in a worse position than where you started from.

To practice this you have to perform stop reps, which may not work depending on your lifting style and what you're trying to work on. It doesn't work with rack pulls and the like, and the "dip, grip, and rip" style deadlifters will likely find themselves thrown off their game.

The list of lifters who use this method is not as exhaustive as those that look up. I see this method as something based more on personal preference versus looking up which is beneficial to almost all lifters.

However, the list does include some studly names like Benedikt Magnusson (he set the all-time world record deadlift of 1015 pounds using this method), Zydruna Savickas, and Mike Turscherer.

Here's a video of Magnusson's all-time world record deadlift with the roll before pulling:

Since I'm a programming guy, I wouldn't give you this information and then leave you hanging. Here's a deadlift program that's particularly good if you're reasonably strong (double bodyweight deadlift minimum or 500+ pounds), haven't deadlifted heavy in a while, and want to work on your form while practicing new things. If you're new to deadlifting or just working on your deadlift in general (less that two times bodyweight pull), I'd deadlift more intensely than what's recommended here.

Begin heavy deadlifting every other week. The heavy deadlift will follow the previous program – work up to a single and then perform a back-down set. Continue adding the same weight each week or slightly reduce it (+5-15 pounds). You can follow this for as long as it's still working.

On a separate day each week perform speed deadlifts – 5 sets of 2 reps, each rep is a stop rep (if you're rolling the bar, practice that each rep).

For two weeks use regular free weights, the following two weeks do 5 sets of 1 rep using the same weight as the previous two weeks but adding bands.

For the fifth week add weight to the speed deads and repeat.

Use the following chart for the bands:

Here's a sample video of how to set up the bands for deadlifts:

Here's a sample video of a speed deadlift against bands:

Below is a sample workout for a lifter with a 550-pound 1RM deadlift:

Note: This second day does not start until week 5.

The good news is that deadlifts are awesome and many trainers are including them in their programs. The bad news, especially if the goal is to have a really big deadlift, is that many lifters learned how to deadlift from people that didn't really know how to deadlift themselves.

Here's a radical idea. Let's look at what the best deadlifters have in common and learn from them. So the next time you pull, keep your chin high and look up – you might just find the bar coming up with you.

Abs and obliques need resistance to get strong. Here are two exercises you can do anywhere.
Abs, Tips, Training
Bronwen Blunt May 25

Try a few of these little-used, but extremely effective exercises and break out of your training rut.
Bodybuilding, Powerlifting & Strength, Training
Chris Shugart & TC Luoma June 9