"Lift heavy to grow" is a favorite mantra of coaches and gym rats alike. Heavy weights maximally recruit the large motor units associated with type II fibers, and since the type IIs are strength-related fibers with the greatest growth potential, focusing on their maximal recruitment is the key to getting swole, right?

Type I fibers are like the Rodney Dangerfield of the bodybuilding world – they get no respect. Slower, weaker, and often smaller than their fast-twitch counterparts, the type I's only claim to fame is an ability to contract repeatedly, albeit without much force.

Relegated to a life of 5K's, marathons, and unsettlingly tight running shorts, at first glance this fiber type's ability to resist fatigue seems to be more of a bodybuilding curse than a blessing. As such, training philosophies typically revolve around stimulating and annihilating the type II fiber, with little consideration for the lowly slow-twitch fibers.

However, new research on the effects of different training intensities and the growth of type I and II fibers suggest we may have been selling our slow-twitch fibers short and, in the process, missing out on pounds of potential muscle (1).

It's time to re-think our training philosophies in the context of fiber-type specific hypertrophy.

Certainly, a wealth of studies suggest type II fibers do, in fact, grow more with high intensity strength training (2). The caveat here is "high intensity." It's not necessarily that type II fibers have an innate ability to outgrow their slow-twitch relatives, but that they show superior growth when trained at higher intensities (>50% 1RM).

Our current understanding of the hypertrophy of each fiber type may be more a consequence of the way we've studied them (high intensity) than what actually happens in the gym (2, 3). The best summary of this relationship is a 2004 paper from Dr. Andrew Fry, who compiled the data from various studies on the growth rate of fiber types and found that, at most training intensities, the type II fiber reigns supreme.

As training intensity decreased below 50% 1RM, the type I fibers eventually outgrew the IIs, but the rate of growth in this range was still nowhere near what was achieved at higher intensities, regardless of fiber type. After reading a study like this, not much would change in our training recommendations, but there are limits to the type of analysis (regression) performed by Fry (2).

The biggest limitation is that there just weren't that many low-intensity training studies out there to compare (2, 3), and a paucity of any that directly compared high-intensity against low intensity training while accounting for growth of the different fiber types.

Add to that recent evidence on the growth rates of muscle fibers in response to differing training intensities (1) and you'll soon see that our type I fibers are capable of more than we give them credit for.

While they may be rare, there are enough studies for us to infer we've probably underestimated the hypertrophic capacity of our type I fibers. Recently, Mitchell et al. (1) performed a now infamous training study demonstrating that, when taken to failure, training with low loads (three sets at 30% 1RM) can produce comparable hypertrophy to training at higher intensities (three sets at 80% 1RM).

Ultimately this suggests there's more to the equation than the number of plates you have on the bar and tentatively supports what may be intuitively obvious: Type I fibers are maximally stimulated with longer duration sets requiring lower loads, while Type II fibers respond best to short sets with heavy weights.

A common complaint with most training studies is that the researchers use untrained college students. What happens in these guys' underdeveloped physiques may not represent what would happen in highly trained muscle. Fortunately, when we look at the muscle fibers of various trained athletes, we see support for our fiber type hypertrophy theories.

Taking all evidence into account, it seems reasonable to conclude that differing training intensities can produce comparable whole muscle hypertrophy (1, 6-8), but the fiber-types affected may differ.

As with most things in the scientific world, it's not a cut and dried issue. Two additional studies have investigated this topic – albeit with slightly different designs – and both found high-intensity training to be superior for growth irrespective of fiber type (9,10).

Here's where it gets interesting. While there are exceptions, studies that equate work between high and low intensity conditions tend to favor high-intensity training for both fiber-type specific and overall muscle growth (10,11). Those that don't match the work performed between conditions find equivalent results across training intensities.

Ultimately, the idea that we've short-changed the growth potential of type I fibers (and the ability of low-intensity training to stimulate hypertrophy) depends on the argument that, a) hypertrophy requires a certain minimum of time-under-tension that varies based on training intensity; and, b) this time-under-tension is greater for type I than II fibers.

Burd et al. (12), while not testing any fiber-type specific effects, compared the acute protein synthetic response to four sets at three training conditions – 90% 1RM to failure; 30% 1RM so that total work was equivalent to the 90% 1RM condition; and 30% 1RM to failure.

The protein synthetic response differed slightly in time-course, but was generally similar between the failure conditions, regardless of intensity. However, muscle protein synthesis in the 30% 1RM work-matched condition – which had substantially less total time-under-tension than the 30% 1RM to failure – was approximately half that of the other two conditions.

Bottom line: While the protein synthetic response to a single training session may not be predictive of the adaptations, the fact that two studies have shown comparable hypertrophy when low-intensity training is taken to failure lends further support to this idea (1,6).

The use of heavy weights is justified based on the fact that there's compelling evidence that they induce substantial hypertrophy, regardless of fiber-type consideration (2,9,10,13-17).

Once fatigue sets in, however, you progressively recruit more fast motor units as the force-producing ability of the slow-twitch fibers drops (21). The size principle is preserved, as you recruit motor units from smallest to largest, but you end up using fast twitch fibers with a lighter load once you're fatigued.

This partially explains how the fast twitch fibers grew in the low-intensity training study of Mitchell et al. (1) and why maximizing time-under-tension through fatigue and failure may be important to this concept.

The idea that you're sacrificing pounds of muscle by ignoring lighter-load training may seem like an exaggeration, but a quick survey of the fiber-type composition of various muscles may change your mind.

Granted, fiber-type proportion can vary by individual and is influenced by genetics and training (22), but given that many of the major groups have a substantial percentage of type I fibers – on average, humans have a roughly equal amount of fast and slow-twitch fibers – means it may be worth tweaking your approach to optimize slow-twitch fiber growth.

For those who want to maximize their hypertrophic potential, it makes sense to train across the continuum of repetition ranges. While there may be validity to focusing on the so-called "hypertrophy range" (6-12 reps), both high (15-20+) and low (1-5) repetition ranges should also be incorporated into your training program.

Not only does such an approach ensure full stimulation of the spectrum of muscle fibers, but it also serves as preparatory work for optimizing performance in the hypertrophy range. Low rep work enhances neuromuscular adaptations necessary for the development of maximal strength so that heavier loads (and thereby greater mechanical tension) can be used at moderate training intensities.

Conversely, performance of higher-rep sets help over time to raise lactate threshold, staving off the onset of fatigue and thus increasing time-under-tension during moderate-rep training.

There are infinite ways in which varied intensities can be integrated into program design. Perhaps the best way to ensure continued progress is by periodizing training rep ranges over time. Both linear and non-linear models are viable alternatives here. It really comes down to personal preference as well as individual goals (i.e., whether you're looking to peak for a specific event).

Another option is to base loading strategies on the type of exercise performed. You might decide to focus on low to moderate-reps (~1-10) for multi-joint movements such as squats, rows, and presses while prioritizing higher rep training (15+) for single-joint, isolation type exercises that may be better suited to lighter training loads.

There are no hard-and-fast rules here. The response to training varies by the individual and ultimately you need to experiment with different approaches and find out what works best.

The type II fibers may beat out the type I's for hypertrophic superiority, but are you willing to take a chance and underestimate the potential of type I's? It seems that an optimal hypertrophy training program would give your fast-twitch fibers the heavy weights they crave, while providing your type I fibers the extended time-under-tension they deserve.

If squats are causing you pain right now, you can still train your legs. This exercise will load the spine less and still blow up your legs.
Exercise Coaching, Kettlebell Training, Legs, Tips
Ryan Taylor May 26 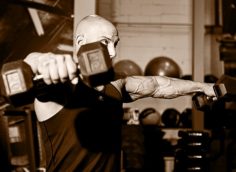 Yes, trained correctly, you can do these shoulder wideners daily. Here's how.
Training
Christian Thibaudeau October 17
This article isn't going to overwhelm you with neuroscience or obscure language. Nope, it's going to be bare-bones simple. As I've learned over the years, elementary advice is usually what helps people most, and it tends to work best.
Training
Chad Waterbury May 15