The only thing I love more than the Smith machine is talking about the Smith machine. Mainly because I get to watch so many strength coaches lose their shit over it. And they've always got the same tired argument:

"But, but, the stabilizers!"

They think using the Smith machine is a waste of time because it removes the need for muscles that stabilize the body. But when one of the strongest men that's ever set foot on the planet uses the Smith machine to build his overhead press, that argument is invalid. That man's name? Zydrunas Savickas, aka Big Z.

How absurd do the anti-Smith machine peasants get over this? I've literally seen them comment that he's wasting his time and say he'd do "better" if he were to dropped Smith machine work and replaced it with more functional overhead pressing. These conversations really happen. What a time to be alive.

Ask an anti-Smith machine zealot to explain what muscle is being left out of, say, a Smith machine squat or overhead press, compared to its free weight counterpart, and you'll be met with:

And anecdotally, I've seen countless people do it. Yes, anecdotal evidence still matters. We don't need a control group to validate every training method as being legitimate. If it works in the field, and people get bigger and stronger from it, they don't sit around contemplating if their new gains are real life or from the Matrix.

Instead of squabbling on the internet with people who don't have enough muscle to fill out a medium sized T-shirt, maybe you should actually just have a tall glass of scientific shut-up juice, and go to the gym and train really hard for a few months in the Smith machine.

Then when you get back to your standard barbell movements, and you're stronger, you can contemplate the meaning of life and gains and wonder what's real and how you've allowed yourself to believe the lies all this time.

My challenge to you is to do this leg work for the next six weeks and leave your "functional strength coach guru" card at home.

If your legs don't grow on this, then the only explanation is that you never got vaxxed for Polio. I literally can't think of any other reason. Even Lieutenant Dan could grow legs on this program. So you can too.

And then you can set up a booth outside of your gym and serve up tall, delicious glasses of shut-up juice for all of the strength coaches and functional training gurus while hitting quad shots in your daisy dukes.

We might as well kick this off in the most stomach-churning way as possible. This is the "driver" of the whole routine. Yes, in the back of your mind you're going to want to save some in the tank here. Don't. Approach this program with the mindset that this initial work set makes or breaks the program.

We're going to be using the one and a half reps method here. That is, you go down, come half-way up, go back down, then come all the way back up. That's 1 rep.

You're going to do 10 reps this way. (Which actually turns out to be twenty total reps in reality.) Pour everything into this set and leave nothing on the table. You should have visions of Abraham Lincoln cursing at you in Kiswahili about how you neglected your stabilizers as you lie on the floor. If you need to rest for 10 minutes or so before moving on to the next exercise that's perfectly okay. I will allow it.

For these, set your feet out in front of you so when you hit bottom your shins are vertical or very close to vertical. As noted by Nick Tumminelo, this position is practically identical to the position you're in when you do a lunge. And few movements smoke the glutes like walking lunges. Lunges are also functional.

Now we're going to change it up a bit and move to Smith front squats, with a different foot position than the previous set. With this set you'll get more direct quad work (because surely, they didn't get worked from the previous set). And hey, nothing actually works when using the Smith machine. Just ask a strength coach. He'll tell you. "Zero stabilizer work."

For the front squats, use a foot placement where your feet are either directly under you or just slightly in front of you. We want some big time knee-forward action going on here.

If you're prone to throwing up, and didn't from the previous exercise, this one could push you right into the kingdom of the porcelain thrones because you're going to be doing a 50% set.

50% sets are where you do a set, pretty much to failure, then rest 1 minute with no change in the weight, and do another set. The goal of the second "set" is to try and get at least half as many reps as you did on the first set.

So if you got 12 reps on the first set, you'll rest one minute, and shoot for at least 6 reps on the second set.

That's it. No degree in quantum physics is required.

Now we're going to turn the Smith machine into a lying leg press machine. You'll need to set the pins or safety catches here so that the bar is resting on them at the bottom. It will need to be high enough for you to wedge yourself underneath the bar, but low enough so that you're getting a decent range of motion. No three-inch rep stuff.

Start with a hard set of 10, take some weight off, and immediately do another hard set of 10. Repeat that one more time and you're all wrapped up on the quad-focused portion of the "no-stabilizers" machine.

Now to smash some glutes and hams.

Do 3 sets of 15 reps with 3 second holds at the top. What can be said at this point about hip thrusts that hasn't already been said by Bret Contreras?

Load the bar up fairly light and really focus on getting a strong glute contraction through full hip extension. This exercise pays dividends if done lighter with a focus on mind-muscle connection. At the top of each rep, hold for 3 seconds.

There's also one more twist: Allow your toes to be off the floor so that your feet can turn outwards, aiding in external hip rotation, which is needed for a maximum glute contraction.

Do 2 sets of 10 reps, and use 5 second eccentrics (lower slowly). For this exercise the Smith machine is actually superior to the barbell because you can sit back further since the machine holds you in place. This allows you to get a much deeper stretch in the hamstrings, and a more lengthened muscle is going to receive more of that delicious time under tension.

Do the eccentric (negative) portion of each rep with a 5 second cadence. Now let me be clear here, that's approximate. I personally don't like counting cadence in reps because I feel it takes away from what you should be focusing on – execution. So I'm saying "5 seconds" mainly just as a reminder for you to perform the eccentric very slowly and with control.

The hamstrings are built to handle the deceleration of the eccentric contraction. So there's almost no better way to build them than using this non-functional Smith machine... in precisely the way the hamstrings function.

There's not a massive difference in what you'll get from good mornings compared to Romanian deadlifts. The execution is focused on the hinge portion of the movement, lengthening the hamstrings, and using a nice controlled eccentric.

The moment arm is a bit longer with a good morning compared to the Romanian, which means you're working in a little more of a leverage disadvantage in comparison. Outside of that, the movements have a lot of similarities from a muscle working perspective.

Nevertheless, do it! Your hamstrings will curse you for the extra volume over the next few days.

That is, if the hams actually did any work. Which they didn't, since this workout is all done in a Smith machine... where muscles don't actually do work and stabilizers are left to wither up and die like a stranded newborn on the Serengeti.

Is it time for you to dump a favorite exercise and switch it for something new? Answer these three questions and you'll know.
Bodybuilding, Powerlifting & Strength, Tips, Training
Charles Staley May 8
12 Weeks to Astounding Abdominals
Training
Ian King May 31 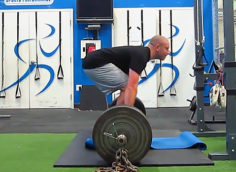