My fat-loss journey has been a long one – nearly five years in the making – but for this story to make sense, we have to go back to 2013. That's when I started my first weight loss experiment. I went from 340 pounds to 283 pounds.

On top of that, I hit several powerlifting milestones in the process, hitting my first 800-pound squat and 600-pound deadlift.

I was on cloud nine. I was losing weight while simultaneously gaining strength. I even outlined my methods right here on T Nation in an article titled Westside for Fat Bastards.

Things got away from me, though, when my efforts to keep lifting heavier and heavier forced my bodyweight and health to take a backseat.

Looking back, I have sort of an excuse for letting my body composition slide. I started working with the "Freak of Freaks," Larry Williams. Over the past six years, he's broken three all-time records in three different weight classes, most notably the record for 308 at the 2020 Arnold.

Helping to develop him and some of the best powerlifters in the world drove me to continue working towards new strength milestones for myself. Hell, I wasn't going to sit back while they smashed records.

While I was successful from a strength standpoint, finally hitting a 900-pound squat in competition in 2015, my bodyweight ballooned back up to 335 pounds.

My feelings of success were short-lived, though. That same month my grandfather passed away. It was a reminder of how short life is and how important health is.

But I had one more box to check off before I was ready to jump all-in on a lifestyle change. I wanted to have a "grand" on my back at least once. A little over a year later, I did an exhibition lift and hit a 1000-pound partial squat in the gym.

Crossing off that goal let me say goodbye to the SHW (super heavyweight) version of me and focus on my health.

Clearly, I wasn't leading by example.

From that moment on, I made a decision to always lead from the front. I never wanted anyone to question whether I was actually following my own advice. I knew that to be the best coach I could be, and to have the biggest impact and help more people, I first needed to help myself.

With powerlifting being such a huge part of my life, I couldn't just let it go entirely. I started to diet and put squatting and benching on the back burner for a bit, but I still kept some focus on my deadlift.

This little "cheat" allowed me to trick myself into thinking I was actually getting stronger while losing body fat.

For the record, my leverages for deadlifting were horrible as a super heavyweight. My best pull was 640 pounds and my best deadlift in the gym was 700 at a bodyweight of 290. But I knew my pull would get better as I dropped bodyweight, so I elected to sign up for a meet in the 275-pound class for deadlift only.

I ended up pulling a smooth competition PR of 660.

This accomplished two things. First, it gave me a deadline to focus on so I was forced to get back under 300 pounds in a certain timeframe. Second, it still allowed me to lift heavy so I could continue to derive satisfaction from doing what I love.

It then occurred to me that I could use this same logic for ALL weight classes and work myself down one weight class at a time. I could set new PRs in each weight class and have no emotional attachment to my numbers. Every weight class would technically be a new PR. It was a win-win!

This is where the idea for my next big challenge was born. What if 800 pounds became the benchmark for every weight class I dropped to? From that moment on, I vowed to work toward hitting an 800 squat in eight different weight classes.

I felt that even if I couldn't hit all-time PRs anymore, it would be really cool to do something that, to my knowledge, no one in history had ever done before.

Attaching a strength challenge to my weight loss goal made it a much more "fun" journey for me. And while it was a nice challenge, it was time to give my body a break from the wear and tear of all that competing.

Plus, I knew if I wanted to truly take my body to the next level, I'd have to commit to true bodybuilding training for a bit.

The number one lesson I learned from 14 years of powerlifting is the importance of goal setting and picking out a meet. There's something magical about "sending the check in" that makes you flip the switch. It means you're truly invested.

In this case, I needed something else to spur on my fat loss, so on January 1st I gave myself six months to get ready for my first bodybuilding show. (The original show date was May 30th, but it's been re-scheduled four times already. Hey, what's a little additional adversity?)

I'm currently at about 205 pounds, but my goal is to get down to about 195 if and when the show finally happens.

I knew transitioning from a strength-focus to a physique-focus was going to be a change. Gone were the days where most of my workouts focused on one primary movement followed by a supplemental version of that lift.

Instead, as I started to tiptoe down the rung of weight classes, my training began to resemble that of a lot of bodybuilders: chest, rear delts, and arms on Sunday; quads, hams, calves, abductors and abs on Monday, and so on.

Typically, I train twice a day with one weight session and one cardio session and each one lasts 45-60 minutes.

For lower body, I might do leg extensions, leg curls, and abs, and then go into high-bar squats or deadlifts.

As I got closer to my show date, I cut out more heavy compound work and added in more machines or lower-risk exercises. Barbell inclines sometimes turned into decline push-ups while high-bar squats turned into belt squats.

Over the last five years, I implemented a lot changes. I called them the "four pillars of physique management." That's training, sleep, stress management, and eating.

I've already talked about my training, so here's a quick rundown of the other three pillars:

As mundane as it sounds, dialing in my sleep was a game changer. If you're getting up at 4 AM to do cardio and shortchanging yourself on getting a full 7.5 hours of sleep, STOP! Beyond that, here are some critical sleep tips:

Using breathing techniques to help you relax after training or a stressful situation is big. Everything you experience is a stimulus – your job, relationships, finances, what you read, what you listen to, etc. Everything you consume is going to have an effect on your stress levels.

I cope by spending time walking outside in nature and doing some light breathing exercises with "yoga" drills once or twice a week. If you want to stay strong as you lose fat, you need to let your body downregulate in between workouts.

Sensible eating isn't just about calories. You need to do the following:

For the last five years I've gotten a minimum of 220 grams of protein a day. Right now my average protein intake is 350 grams per day. Protein has a higher thermic effect than the other macronutrients and eating more protein is also going to help you maintain muscle during a dieting phase.

Although they're more calorie-dense, foods like salmon, red meat, and egg yolks are always going to be in my diet. Micronutrients matter, and while you do need to be in a calorie deficit to lose fat, make sure you aren't dieting only on white fish, egg whites, and chicken.

Give yourself a diet break every 12-16 weeks and aim to just maintain weight for a bit while adding some strength back. Play the long game and don't try to rush the process or starve yourself.

I go through periods of meticulous tracking to get a baseline. I basically try to only measure when I need to, but once I get in a groove I tend to eat the same meals over and over again and then see how the scale moves over the course of a few weeks.

Once I have a handle on my food, I'll stop tracking and just make adjustments based on food choices. For example, I might go from 90% lean beef to 96% lean beef with the same serving size, or I might go from one cup of rice to half a cup.

Similarly, I might make a food less caloric, like going from whole eggs to egg whites. I wouldn't necessarily track something like that, but I know I'm dropping calories by just making simple changes.

Coaches need coaches too! Being able to collaborate on my macro breakdown and calorie needs this past year with bodybuilding coach Sean Cody has been amazing. It's like having a GPS guide you towards your destination, helping you re-route as roadblocks come your way.

This was the condensed version of my five-year, fat-to-fit trip. Remember, there's no magic bullet to help you accomplish any kind of physique goal, but there are definitely a lot of principles here you can take and use for yourself.

One thing's for sure: You need to dig deep and know your "why" before you can eventually figure out the "how." Motivation determines outcome.

For me, doing my first bodybuilding show will allow me to have a greater impact on the people I work with. Despite the fact that the show's been cancelled four times now, I'm still on track and well on my way to achieving my ultimate goal of becoming stage ready. 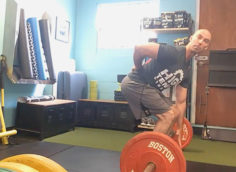 Is this variation right for you? Probably. Here's why.
Deadlift, Exercise Coaching, Powerlifting & Strength, Tips
Tony Gentilcore November 3
Why you should train each muscle group more than once a week
Training
Chad Waterbury May 31
The other day I was training at a local gym and witnessed a horrible tragedy taking place – a personal trainer taking his client through a warm-up!
Training
John Paul Catanzaro November 1

If this five-step calf training program doesn't work for you, then you're just not trying hard enough. Check it out, if you dare.
Bodybuilding, Calves, Training
Dr John Rusin February 15