The Blood and Chalk series is a labor of love for both Jim and me. And really, what’s not to love? In each installment, Jim delivers rock-solid, no-nonsense training advice that will help get even the most neurotic lifter bigger, stronger, and in better condition.

But unfortunately, the inevitable happened. I ran out of questions, and Jim, well, he caught a scorching case of writer’s block. How bad was it? Well, let’s just say he was bunged up tighter than an Atkins dieter on a three-week heroin binge.

It was time for a little creative intervention. An inspiring Friday phone call from editor to writer, to unclog the creative blockage and stimulate some productivity; a mental Metamucil, if you will.

T Nation: Hey Jim, sorry to bug you right before a long weekend…

What? Can you hear me? This phone sucks. I think I slammed it one too many times. 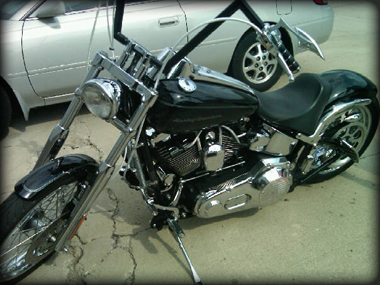 T Nation: Yeah, sure I can hear you, sort of. I guess. Uh, what was your question?

Listen, I have no time here. I’m leaving right after work for the Maryland DeathFest. We’re riding our bikes out there. It’s going to be awesome. It’s a 500-mile ride and I can’t wait.

That’s nothing dude. I’ll ride anytime, anywhere. This year I’ve put over a thousand miles on my bike already. I love riding cause it takes me away from everything, especially the news. If I have one more person say to me, “Hey, did you hear about the oil spill?” I’ll blow a gasket.

T Nation: You got a Harley, right?

I was done with Harley after two weeks. Fuck it, I want custom. My hard tails should be done in June and then I’ll have a fully customized bike. I’ve chopped it up, lowered it down, and removed the fenders, stuff like that. My buddy does everything. It’s going to be sweet.

T Nation: Quite a few people are talking about the piece Nate Green did on Matt Kroczaleski and his decision to compete in a bodybuilding show. Do you think more lifters should try something similar, meaning should bodybuilders try powerlifting and vice versa?

Probably not. Think about it, if you want to play Division 1 football, is it really going to help if you go play basketball everyday? Sure, you can go out and have fun and maybe even have some success, but I doubt the average person will have the same level of success versus if they just buckled down and did one thing.

At some point a serious lifter really has to choose one or the other, cause most people just aren’t good enough to do both. In other words, most people aren’t Matt Kroc. That doesn’t mean that the average guy can’t take a detour on occasion and steal some ideas, but to excel at something you should generally focus on just one goal.

T Nation: But there are definitely things bodybuilders and powerlifters can learn from one another, right?

Of course. Train for a bodybuilding show and you’ll learn how your body responds to diet, to different exercises, and to volume. The greater isolation work will likely help identify and maybe even correct some imbalances as well.

T Nation: So does that mean you’re going to pull a Kroc and hop on stage in a banana hammock?

Screw that. Bodybuilding has got to be the most disciplined sport in the world; well, if it’s a sport at all. Look at football. Sure, you have to practice every day and lift weights, but at the end of day you can still have a life. In bodybuilding that’s just not the case. I have tremendous respect for it cause I sure as hell couldn’t do it. 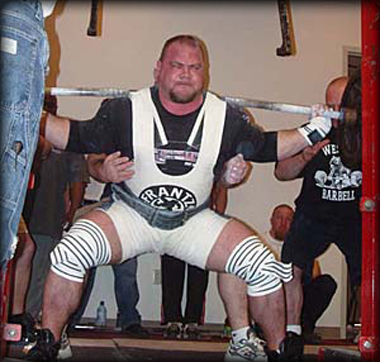 T Nation: How important is environment to making optimal gains? You hear guys talking about Westside Barbell and Elite like they’re these Meccas of strength where every serious lifter has to train at.

It’s not really that important. Well, I shouldn’t say that-it is for the people who let’s just say are “extrinsically motivated.” For these type of lifters, environment is very important. But that certainly isn’t everyone. Granted, if you’re going heavy and require spotters, obviously it helps to have experienced people around.

T Nation: And to learn from as well?

Sure. Let me put it this way: if you’re a relative beginner, a good crew is very important. But I would rather have no crew than a bad crew any day of the week. If you train raw like me, meaning no gear, no shirts, and walking all your lifts out, then you don’t need anyone. I trained alone yesterday and had one of the best workouts that I’ve had in ages. Once you know what you’re doing, it’s all just mental.

In general, I think that people make too much of it, and I used to, as well. Now I hate cheerleaders. I don’t need some asshole yelling at me to make a lift. I know what to do.

T Nation: Are you saying you’re not like Ronnie Coleman and need some dude in spandex to slap you before you pull a PR ?

That’s some funny shit. Listen, this is what I learned. I was at the University of Arizona and Rob Waldrop, who was the Outland Trophy Winner (awarded to the best college football interior lineman), was squatting. This guy was fucking strong. That day he was squatting in the mid-600’s for 7 or 8 reps, and he was just getting under the bar when some noodle yells, “C’mon Rob, lets go man!”

Rob just stopped, turned around, and gave the guy this death glare, basically saying, “Would you please shut the fuck up?” and the whole weight room got whisper quiet. Rob then just turned around, did his set, and got it done.

That’s when I realized that if the Outland trophy winner didn’t need a bunch of cheerleaders then I didn’t need them either.

T Nation: But you don’t think you could’ve reached a 1000-pound squat training on your own, do you?

No, to lift that kind of weight you do need some guidance, but really, most people aren’t looking to do that. I’ve just noticed that people who don’t train in hardcore gyms like Westside Barbell or Elite will often use that as an excuse for being mediocre. Fuck that, you should embrace it. You’re going to have to reach this goal on your own, and that’s the greatest gift someone can give you-the freedom and ability to make it on your own.

I have a huge conditioning goal. We have these two hills; one is super long and one is normal. I always run the normal hill, because the long one is just so ridiculously long. Three runs will turn the average guy into a puking mess. My goal is to get to ten. My record so far is six. It’s total heart attack territory.

T Nation: Hill sprinting is like your go-to exercise, isn’t it?

The other motto is: Is what I’m doing awesome? If I ask myself that and the answer is no, then I don’t do it.

So with conditioning, when faced with something like jogging on the treadmill, ask yourself first: is this awesome? When you see someone in the gym on a treadmill, do you go, “My God, that is so awesome!” No, you go, look at that poor dumb bastard, he probably just had a triple bypass or something. But hill sprinting? To me, that’s awesome.

Of course, geeks like to bust my chops with questions like, “How do I even know if something is awesome or not?” My answer is, if you’re so freaking unsure that you have to ask someone else for his or her opinion then the answer is it’s probably not the least bit awesome.

T Nation: Or go squat and run hills and maybe the answer will become clear?

Ha, exactly. It’s kind of meathead-ish and stupid, but it’s what I use to stay on track. I like to think of it as my meathead system of checks and balances. Regardless, it seems to work, for me.

It’s everything you need to know for increasing your 1RM and getting ready for a meet, and I tried to cover everything.

I have separate squat cycles that are designed upon a completely different sets and reps base, and how to switch exercises as a meet approaches. I cover how to put your gear on, and how to incorporate gear into your training, I go into conditioning, even how to take steroids.

T Nation: Are you serious?

Yeah, no one else has ever done it, so I said why not? I cover what drugs to take for a meet, and it’s what lifters actually do take, not the nonsense you read on the internet.

T Nation: I have to admit, I get a little annoyed whenever a “natural” lifter diminishes another lifter’s accomplishments by saying, “Aww, that’s all drugs.” Sorry, but there was still a lot of work put in.

I’ve noticed that the people who complain the loudest are always the people who are the least sure. You see the same thing with people who argue about religion. If you’re so confident in what you believe then why do I have to believe it with you? So if someone really believes that you just need drugs to build a 2000-pound plus total, that’s just depressing. People like that must just want to be miserable.

I also show how guys stay on steroids year round and how they ramp up as a meet approaches. 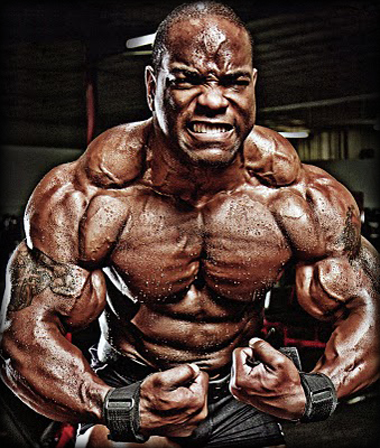 T Nation: Speaking of Blast and Cruise, do you apply this philosophy to training as well or are you more in line with what Dave Tate called Blast and Dust?

One thing that I’ve learned since college is that you need to learn how to cruise. Look, I love living life hard: I ride hard, live hard, and lift hard. But there comes a time when you need to scale it back.

I’ve learned that when you experience something in your life that’s fairly monumental and really knocks you on your ass, you gain perspective. Then, none of the other shit makes a difference. You need to learn to cruise and enjoy ever day as it comes.

Why would you sacrifice this one life that you have for just training? Everybody has their own set of gifts, and those things can develop or change over time. But if you’re always on Blast mode in the gym, everything else just gets thrown to the side. Sometimes, you need to step back and take notice of other things; especially the people who’ve helped you the most, and matter the most.

Wherever you are, that’s where you should be. So if you’re at work, be at work. If you’re at home, be at home. If you’re with your buddy, be there for him.

T Nation: In other words, don’t constantly be thinking about training when you’re at the park with your kid?

Exactly. If you have a bad day at the gym, don’t take it out on your wife or your kid. They didn’t have anything to do with it. It’s a fucking squat.

If someone really believes that, then go out and have sex with a dude and let me know how it goes. Any guy who thinks that must be named Richard Tucker.

T Nation: Ahh. I see. So, what’s the next Blood and Chalk going to be about?

How the hell would I know? I was going to cover the Richard Tucker thing but you just spoiled it. Look, I gotta go.

T Nation: Have fun at DeathFest!